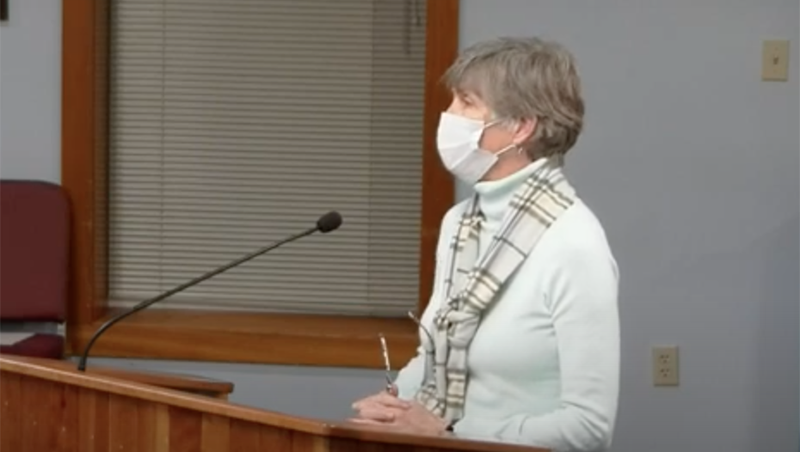 Julie Robinson shares her concerns about neighboring construction plans that she believes will change the look and feel of her family’s historic beach cottage. KDH meeting screenshot

Kill Devil Hills commissioners discussed the plight of many historic beach cottage owners who face neighboring construction of massive homes, following a public comment by Julie Robinson, whose cottage has been in her family for five generations.

Robinson shared memories at the February 7 meeting of summers spent on the beach and playing on the sand dune in front of the beach cottage her grandfather built, which is located at 2019 S. Virginia Dare Trail. Three neighboring properties are in the process or have recently been sold, with plans to construct massive 22-bedroom homes with event spaces.

“I understand that change must happen and I know after talking to many people who have been in this fight and several that have been involved in trying to stop the construction of these large houses then there’s really nothing I can do. But, I can speak out and let you know how difficult it is for a family to have to think of selling or tearing down a structure that is so important to their family history – because you know as I do that the construction of three monstrous houses next to our small cottage will engulf us, block our breezes, create problems with noise and safety, invade our privacy and disturb the integrity of that beautiful dune that we’ve enjoyed since childhood,” Robinson said.

“To me it is a shame that regulations were not put in place several years ago to maintain the beauty and history of the town. Kill Devil Hills is now known not as a peaceful family beach designation but a town of commercial enterprises with monstrous event houses and congested beaches. I’m terribly saddened and disappointed by the lack of vision and foresight which has resulted in the loss of the history of this town,” she continued.

Though commissioners do not have to respond to public comment, they did engage in a lengthy discussion about the difficult situation many historic cottage owners face as large homes go up next door.

Commissioner Ivy Ingram asked if Kill Devil Hills could look at other towns that have successfully preserved historic districts.

Town manager Debora Diaz said that the town has been unsuccessful in this endeavor. “We tried really hard. We went through the whole review process and inventory and everything and we did not meet the threshold to be able to create [historic] districts,” Diaz said.

Mayor Ben Sproul said the town has had some success with incentivizing cottage courts, or smaller, cottage-style homes. “I think those will be some of the first homes that are below 3,000 square feet that have been built in many decades [in that area] so we’re very proud of that a little bit of progress that we’ve been able to make.”

Unable to offer a solution to Robinson, commissioners offered compassion. “I think I speak for everybody here that we certainly empathize with the situation,” said Sproul. “My family has a cabin that was built by my great, great-grandfather a hundred years ago and it’s in the middle of nowhere out near West Virginia but if a giant cruise ship house got built next to it, it would break my heart in the same way that your heart is being broken these days. We feel for you and we’re trying our best up here and we hope that everyone realizes that.”

Moving on, commissioners approved a site plan review for the Jolly Roger Restaurant, located at 1836 N. Virginia Dare Trail, to add a 4,118 square foot addition. The restaurant plans to add a 256 square foot second story deck, add 23 parking spaces, and construct an “Instagram-worthy” gazebo as Sproul described it. Construction will begin in September.

They also held a public hearing to receive input on changing the mayor’s term from two years to four years, though no one spoke during the hearing. The vote to change the town charter will come at the March commissioners meeting.