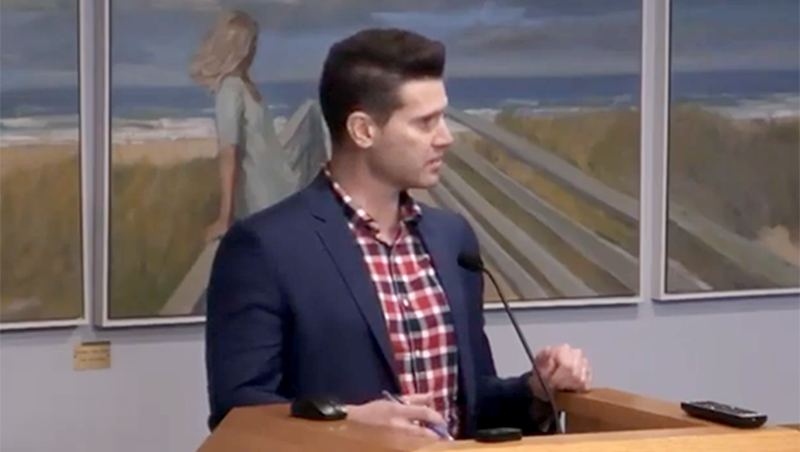 Public works director Eric Claussen comically discussed the condition of the beach road during peak season, then offered a suggestion to keep the town looking presentable.

“I arrived here last April and one of the very first things that I did was drive up and down the beach road, knowing that that’s one of the most visible areas that we have in the entire community. April looked pretty good and then, you know, everyone told me be prepared for the start of the tourist season because it’s like a light switch that turns on and off. As we got into May, I was taking those same drives several times over the weekends looking at the beach road and I would equate that to a five-year-old birthday party – everything is intact and then all of a sudden the five-year-olds come and they just destroy everything.”

Claussen discussed the trash problem in Nags Head, with failure to roll carts back on time and the general mess resulting from carts lining the streets. “The ultimate goal is to have a presentable beach road when [visitors] arrive on Saturday,” he said.

The town is considering an enhanced roll cart rollback service, which means that the service provider would actually go onto the properties the day before pick up and pull the carts back from the house to the right-of-way. After the trash collection, the carts would be rolled back in a single file line so, as Claussen said, “there would be some kind of order to what everything looks like.”

About 2000 houses would be included in the new plan – from S. Virginia Dare Trail to Oregon Inlet. The service would last from May to October. Properties receiving the service would pay for the service on their tax bill. Claussen estimates that the fee will be under $20 per household per month.

Commissioner Mike Siers mentioned the possibility of sending letters to permanent residents “who don’t mind rolling their carts back and forth” to provide an opt-out option, citing those who are on fixed incomes who may not want to pay the extra fee.

Commissioners moved on to approve a site plan from Blue Moon Five, LLC to construct a 8,676 square foot, two-story restaurant at 4329 S. Croatan Highway that would seat about a hundred people.

The county is in the planning stage to replace nine EMS stations. “The Nags Head station needs work,” Outten said. From discussions with Nags Head town manager Andy Garman, Outten relayed, “Your goal in the long term is to replace that station . . . ideally we’d like to do that jointly with you. Where do we go? How do we keep this discussion moving forward?”

Mayor Ben Cahoon replied, “I believe it would be appropriate for the board to charge the town manager to enter those discussions knowing that the board would like to work cooperatively with the county to determine what the terms and time frames may be for a project going forward that mutually works for both the county and the town and to bring that back to the board.”