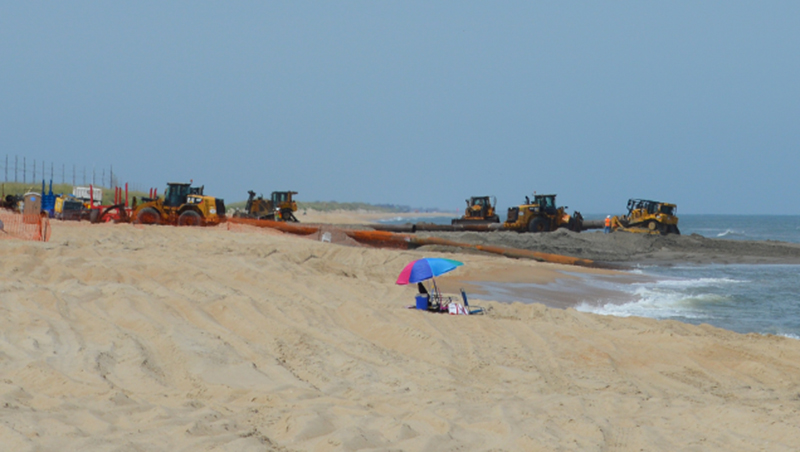 An approving resolution, unanimously adopted by Dare County Board of Commissioners, is the last step in the final placement of 2022A and B Limited Obligation Bonds to finance the Buxton and Avon beach nourishment project.

For Series 2022B, which is for debt for the FEMA reimbursable portion, Truist Bank again submitted the winning bid at 1.39% interest. Series B principal will be paid after FEMA reimbursements are completed, estimated to take two years. The Series 2022 B total is $6,356,736.

The board’s action was taken after a public hearing at which no comments were received at the Feb. 7, 2022 regular meeting of the Dare commissioners.

At the same meeting, the commissioners adopted an amendment to beach nourishment projects as a result of Duck and Kitty Hawk increasing cubic yardage. The amendment adjusts construction and contingency expenditures for each town and changes town contributions.

The commissioners also adopted amendments to the Capital Investment Fund and the Beach Nourishment Fund. The amendments insert the actual amounts for debt service for the current fiscal year, which is $40,207.

On the agenda for the Dare commissioners’ Feb. 22 meeting were two items related to the beach nourishment projects for the towns.

One amendment to the project budget records two decreases totaling $60,440 in the contract for Coastal Protection Engineering.

The second agenda item was approval of the Coastal Protection Engineering contract between Dare County and the firm for construction administration and engineering services as required by the regulatory permits. Five of the tasks will be billed at a lump sum amount of $206,442. One task will be billed as a not to exceed amount of $446,886.75.