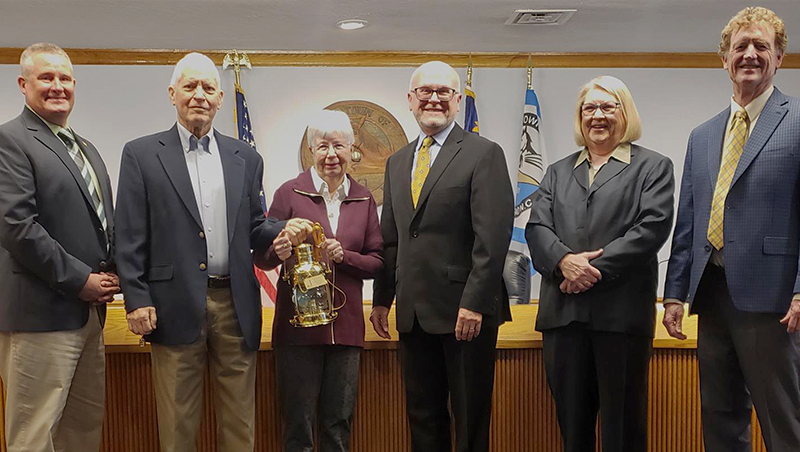 Nags Head’s Board of Commissioners honored residents John and Annette Ratzenberger on March 2, 2022 with the town’s Lightkeeper award for their selfless service to the community. They are pictured with, from left, commissioner Kevin Brinkley, Mayor Ben Cahoon and commissioners Renée Cahoon and Bob Sanders. Not pictured is Mayor Pro Tem Mike Siers. Courtesy Town of Nags Head

A Nags Head husband and wife have been recognized for their service to the community.

John and Annette Ratzenberger received Nags Head’s prestigious Lightkeeper award from the town’s Board of Commissioners at their meeting on Wednesday, March 2, 2022.

“Your determined, passionate service to our community has made impacts like few others,” said Nags Head Mayor Ben Cahoon during the presentation. “We recognize your tireless service over the years and want you to know that we appreciate all that you have each done for our town.”

A press release from the Town of Nags Head noted that the award recognizes those who have shaped the image and direction of the town. Nominees are judged on criteria including:

“John, a retired United States Army Colonel, and Annette, a retired J95 chief of experimentation engineering at the United States Joint Forces Command, were no strangers to public service before moving south to Nags Head in 2003,” stated the release. “Upon moving to Nags Head, John quickly became known for a newsletter he distributed in which he covered topics such as weather events and local government issues. From there, both John and Annette volunteered for a myriad of boards and committees.”

During the town’s efforts to bring beach nourishment to Nags Head, the Ratzenbergers served on the Beach Nourishment Financing Committee, working to develop a formula that would fund future projects. Additionally, they acted as information ambassadors, calling and visiting property owners to explain the many details of the proposed beach restoration and its funding.

Individually, John spent eight years on the town’s Personnel Grievance Panel, six years on the Citizen’s Advisory Committee, one year on the 50th Birthday Committee, two years on the Planning Board and four years as an elected official on the Board of Commissioners.

Annette, currently a member of the Village at Nags Head Homeowners Association Board, served on the Board of Adjustment, as well as both the Artwork Selection and Solid Waste/Recycling Committees. In addition, she spent 10 years on the Fireman’s Relief Fund Board of Trustees, where she spearheaded efforts to provide firefighters with additional retirement benefits and scholarships, as well as developing a program to provide cancer insurance to all active firefighters.