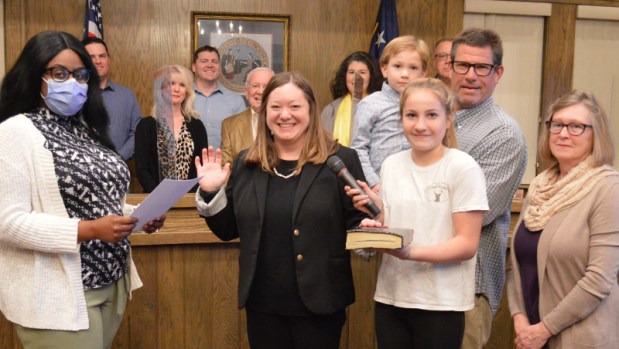 Melissa Dickerson prepares to take the oath of office as the town manager. Town Clerk Jamie Whitley, left, administers the oath. Dickerson’s family joined her for the ceremony. Holding the Bible is Bailey Dickerson, with Janie Midgett on the right, while Billy Dickerson holds a lively Buck. Manteo commissioners stand behind Dickerson. M.H. Goodloe-Murphy photo 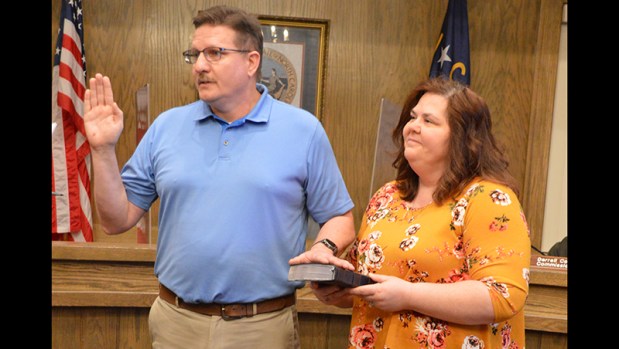 At the March 2 Manteo Board of Commissioners meeting, Carl Woody took the oath of office as Manteo’s building inspector. He will also continue as director of the town’s Information Technology Department. Holding the Bible is Woody’s spouse, Angela Woody. M.H. Goodloe-Murphy photo 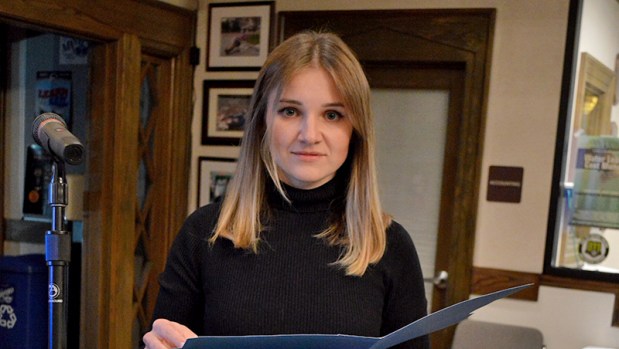 Addressing the Manteo Board of Commissioners is Oksana Holovanenko, 28, originally from northeastern Ukraine. As a member of the Ukrainian community of the Outer Banks, she is soliciting funds for relief supplies for her home country. M.H. Goodloe-Murphy photo

Melissa Dickerson formally took the oath of office as the new Manteo town manager at the March 2, 2022 Manteo Board of Commissioners meeting.

For the occasion, Dickerson was joined by her family.

In a brief address, Dickerson said “My assurance to you and to the Manteo community in my role as your town manager is that we will have an open, available and transparent town government that seeks input from our fabulous community members, amazing neighbors and that works together to build a Manteo that is the best it can be.”

Also taking the oath of office as building inspector was Carl Woody. Woody will continue as the town’s director of Information Technology.

During public comment, Carolyn Fifield told a harrowing story about a dog attack. “I was very fearful.” She said she was walking her small seven-pound dog when she was attacked by an off-leash pit bull. Two young men from a construction site came to her rescue.

She was told there was no leash law in Manteo, but before the meeting, Dickerson found the leash law in the town code.

After Fifield’s presentation, Manteo Mayor Bobby Owens said, “we’ll have it on the agenda in the future.” Later in the meeting, he asked Dickerson to work with the Chief of Police on the issue.

Also during public comment, Oksana Holovanenko, 28, originally from northeastern Ukraine, addressed the board. As a member of the Ukrainian community of the Outer Banks, she is soliciting funds for relief supplies for her home country.

The board agreed to purchase a solid waste commercial truck which Kill Devil Hills will soon surplus. Currently the town has one operating sideloader. The Kill Devil Hills 2015 truck will be used until a new one arrives. The purchase will save repair money on an existing truck.

Housing will be discussed at the board’s April 6 meeting. The board will solicit comments. Owens said “we need to decide what we want to do for the Town of Manteo.”

During commissioner comments, Ruth Stetson called for a “brainstorming” workshop for the board to consider:

– Cleaning up Shallowbag Bay along the lines of the Chesapeake Bay cleanup.

– Enhance the crosswalk at TL’s restaurant.

Commissioner Darrell Collins inquired as to the status of Cartwright Park. A religious group holds title to the land. Town of Manteo wants to build new restrooms at the park but needs the landowner’s permission, which has been requested. “We need new bathrooms out there,” said Collins.