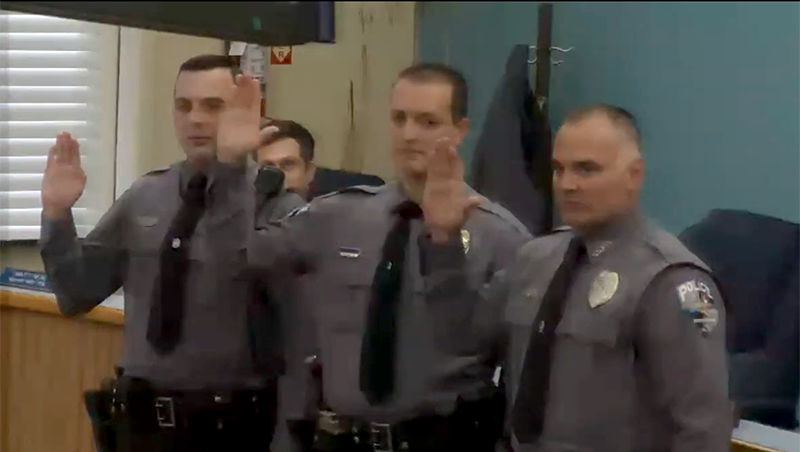 Richard Deanor, Thomas Long and Rick Newell, all from left, are sworn in to the Southern Shores Police Department at the March 1 town council meeting. Southern Shores meeting screenshot

Police Chief David Kole and Officer Zach Eanes gave a presentation about how the town could benefit from a trained K9. According the Eanes, the dog would assist the department in detecting narcotics, particularly heroin, cocaine, fentanyl and methamphetamines and would “limit officer exposure while searching a vehicle.”

Though Southern Shores has access to other canines from the county and neighboring towns, they are limited in the amount of time they may take on a traffic stop without probable cause and often end up missing potential arrests because a dog was not available in time to detect narcotics.

Other potential uses for a police K9 is to track missing persons or stolen possessions and to build community relations, particularly when working in schools or at community events.

The dog available through the program is a two-and-a-half-year-old German shepherd/Belgian Malinois mix.

By accepting the scholarship, the town is signing up for one-time and yearly expenses. The one-time expense is an estimated $7150, about half of which would go for an insert for the K9 in the police vehicle. Yearly expenses, such as food, veterinary care and training/certifications, are estimated at $5800.

Council member Matt Neal asked where the money was going to come from for $130,000 over the life of the K9, though he did not state how he arrived at that number. “The penny pincher in me says no,” he said, though he did ultimately end up voting to approve the scholarship.

The other council members were more enthusiastic. Said council member Leo Holland, “With the trend of more and more drug trafficking that [the police department] has to investigate, they need another tool in their box and I believe this would be something that they could use to start short-circuiting the drug traffic.”

The second presentation to the council explained a piece of police equipment made by Stalker that the department has been testing for several weeks – a mobile radar unit that displays speed, counts traffic and collects data. The machine would allow the town to generate reports to see not only speeds but also hourly traffic patterns, what percentage of vehicles were traveling below, above or significantly above the posted speed limit. It features a large 4’x8’ display with pre-programmed and customizable messages. The town could use it not only for traffic, but for events, community notifications and hurricane warnings. It is warrantied up to five years and can withstand a windspeed of up to 60 mph. The town approved a budget amendment to purchase the radar unit at a discounted price of $16,500, regularly $20,000, and agreed to budget for a second unit next year.

In other police department news, three new police officers were sworn in to the Southern Shores Police Department: Richard Deanor, Rick Newell and Thomas Long. Kole introduced the three new officers to the council and gave a short biography of each.