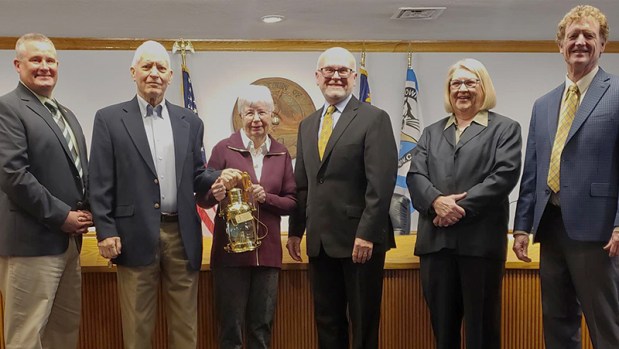 Nags Head’s Board of Commissioners honored residents John and Annette Ratzenberger on March 2, 2022 with the town’s Lightkeeper award for their selfless service to the community. They are pictured with, from left, commissioner Kevin Brinkley, Mayor Ben Cahoon and commissioners Renée Cahoon and Bob Sanders. Not pictured is Mayor Pro Tem Mike Siers. Courtesy Town of Nags Head

John and Annette Ratzenberger were each honored with the Nags Head Lightkeeper Award at the March commissioners’ meeting. “You are each now part of an esteemed group of individuals who help to shape our town through their selfless contributions,” said Mayor Ben Cahoon. “Your names will be inscribed on a perpetual plaque at Nags Head town hall so that everyone is reminded of you and inspired to service.”

After retiring from the U.S. Army, John served his local community. He started a newsletter focused on weather and local government issues, served on multiple boards and committees including the beach nourishment finance committee, the town’s personnel grievance panel, the citizens advisory committee, the town’s 50th birthday committee, the planning board and the board of commissioners.

“In public service it is helpful to have a partner, which Annette is in all things. However Annette Ratzenberger has also served Nags Head in noteworthy ways,” said Mayor Cahoon.

Before her retirement, Annette was chief of engineering at the U.S. Joint Forces Command, where, according to Cahoon, “she briefed, among others, Secretary of Defense Donald Rumsfeld on warfare simulation.” In Nags Head, Annette serves on the Village at Nags Head HOA board and has previously served on the beach nourishment committee, solid waste and recycling committee and 10 years on the firemen’s relief fund board of trustees.

Speaking to both of them, Mayor Cahoon said, “Your determined and passionate service to our community have made impacts like few others. We recognize your tireless service over the years and want you to know that we appreciate all that you have done for our town.”

The Ratzenbergers were presented with a beautiful lantern. “Thank you so much,” John said. Speaking to the importance of serving one’s community, he said, “You’re here. You have the time to get involved in the town. It is really rewarding and it’s really fun . . . we encourage you to get involved.” 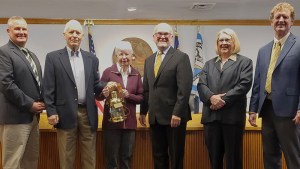 After the award presentation, commissioners continued with the meeting agenda. Dowdy Park Farmers Market event coordinator Paige Griffin shared an update about the park and changes that are coming to the market. For 2022, the town is considering reducing the number of markets from 16 to 11 because of parking. Griffin said she is considering switching some of the Thursday markets to Saturday toward the end of the season.

Dowdy Park will continue with yoga Tuesdays, movies in the park and a holiday market. New for this year is the possibility of partnering with businesses or organizations to sponsor a movie or event. “It’s a way to highlight an area business and give them an opportunity to give back to the community,” she said. Another new opportunity Griffin is considering is creating volunteer ambassador positions to help with market setup.

Several people spoke during public comment: a representative from the League of Women Voters passed out the 2022 Citizen’s Guide; Don Williams, president of Herring Ponds Watershed Association, attended the meeting to hear about the wastewater presentation as it relates to the cyanobacteria blooms; Ukraine native and Nags Head resident Victoria Fala delivered a moving speech requesting aid and support for her family members suffering from Russian attacks in Kiev. She is raising money for Ukrainians through comebackalive.org for food and humanitarian supplies.

Commissioners held a short public hearing to consider a text amendment to the Flood Damage Prevention Ordinance, which would address an inconsistency in the application of the Regulatory Flood Protection Elevation (RFPE) based upon a property’s location east or west of NC 12 in the vicinity south of the Nags Head Village Beach Club. According to a memo from planning director Kelly Wyatt, “under the current flood maps, this area is not located within a flood zone however with the application of the Town’s LES/RFPE, this property is regulated to VE 12’ standards.”

“This is a commonsense solution to a quirky problem,” said Mayor Cahoon after passing the amendment.

Next, commissioners approved a resolution to enter into a contract with NC Department of Environmental Quality (DEQ) Division of Coastal Management for a public access grant to construct a two-story 1795-square foot bath house at the Epstein Street beach access.

The next item on the agenda was a lengthy zoom presentation from Tetra Tech project manager Holly Miller about the decentralized wastewater management plan. The plan, which has been in the works for over a year, is an innovative approach to wastewater management that connects the relationship between stormwater, surface water and groundwater. “It starts to put all of those pieces really well together,” Miller said.

“Overall the program is unique and like no other in the country,” said commissioner Kevin Brinkley.

The mayor said, “I think this can be a model for the other towns.” The plan is in the final stages and will be sent back to commissioners in May for final approval.

In new business, commissioners approved a request from town manager Andy Garman to permanently close a 300-foot portion of 8th Street between Pond Avenue and the fresh pond, the short stretch that runs between the two water plants to provide for a new water distribution shop.

“This will allow us to maximize the use of space there and to be able to bring a driveway in along that north lot line. It would be useful for the town to have that portion of the right-of-way and not have to abide by the setbacks that would be imposed from the lot line,” Garman said.