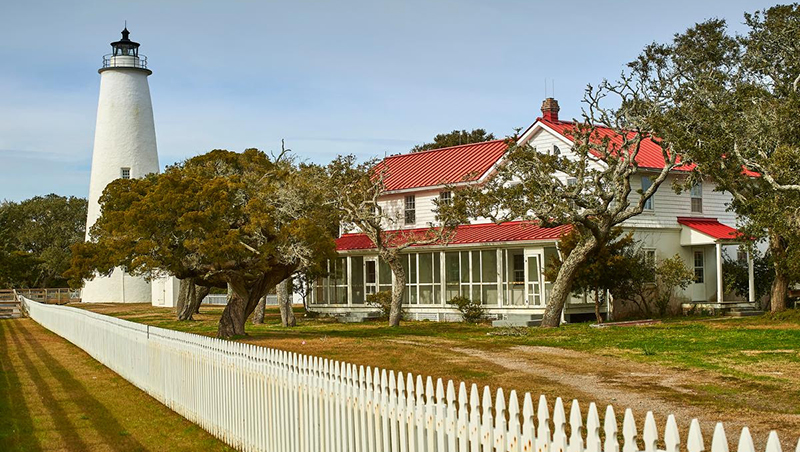 The National Park Service invites public review and comment on an environmental assessment (EA) for the rehabilitation of the Ocracoke Light Station at Cape Hatteras National Seashore. Two public meetings are scheduled on Monday, March 28.

Buildings associated with the Ocracoke Light Station complex include the lighthouse, double keepers’ quarters, carpenter’s shop, store house, cisterns, privy, oil house and generator house. Built in 1823, the Ocracoke Lighthouse is the oldest functioning lighthouse in North Carolina and the second oldest lighthouse still in service in the United States.

“The Ocracoke Light Station rehabilitation project is needed because historic structures have been damaged from recent storms and, if the buildings are left as they are, it is expected that they will be damaged further by future storms,” stated a Cape Hatteras National Seashore press release. “In the wake of recent storm damage and in consideration of future impacts from climate change and sea level rise, the National Park Service proposes to sustainably rehabilitate the Ocracoke Light Station and mitigate reasonably foreseeable flooding impacts while continuing to provide visitor access.”

Under all alternatives, the Ocracoke Lighthouse would be rehabilitated, which would include the following actions:

The three alternatives and a summary of their potential impacts are listed in the Ocracoke Light Station Rehabilitation Project newsletter and EA at parkplanning.nps.gov/CAHA_ocracoke_lightstation.

On Monday, March 28, at 11 a.m. and 2 p.m., the public is invited to attend an EA presentation and question-and-answer session at the Berkley Barn at Berkley Manor, located at 58 Water Plant Road in Ocracoke. The same information will be presented at both meetings.