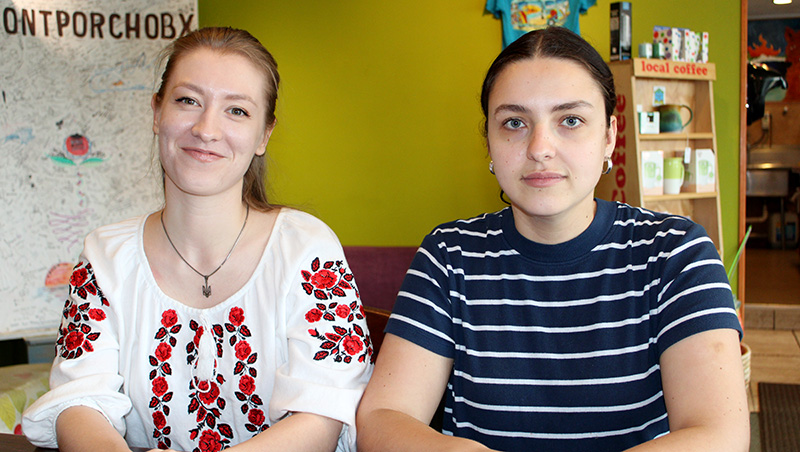 Olga Kramarenko and Anastasiia Forlano work with other members of the Ukrainian community in the Outer Banks to raise money for relief aid in Ukraine. Summer Stevens photo

As the Russian attacks on Ukraine continue into the second month, Ukrainian-born Outer Banks residents join together to bring awareness to the conflict and to raise money for relief supplies to send to those in need.

Olga Kramarenko and Anastasiia Forlano, both 29, came to the Outer Banks as students in 2013. After traveling to other areas, both women returned to the United States and began building their lives here.

Forlano lives in Southern Shores and works at Outer Banks Salon Suites doing permanent make-up and professional make-up. Kramarenko became a citizen in 2018 and works as an independent financial advisor. Prior to this she served on the Board of Directors for Tidewater Ukrainian School in Hampton Roads, Virginia, a non-profit Saturday school for children that exists to promote and preserve the Ukrainian language and culture.

When the war in Ukraine began, Kramarenko and Forlano and other members of the “Outer Banks Supports Ukraine” Facebook group teamed up with Tidewater Ukrainian School to raise money and supplies for people suffering in Ukraine. Tidewater has shipped over 200 boxes of humanitarian aid, baby food, diapers and similar items to Poland, where it is then distributed in Ukrainian cities and villages.

According to Kramarenko, even if you can deliver food to Eastern Europe, getting it into the hands of the people in need is difficult. “It’s dangerous to try and deliver to these places that have been bombed,” she said. When asked how she believes help can come to Ukraine, Kramarenko said, “Shelter the sky.”

Kramarenko’s family lives in the Chernihiv Region, located in northern Ukraine, an area that is experiencing daily bombings and is facing humanitarian crises as food is running out and many are living without basic utilities.

According to Kramarenko, it is especially bad for people in multi-story buildings. “They can’t use the bathroom, there is no water and the heat comes from gas, so there is no heat. On the day of the attack,” she says, doing a quick conversion on her phone from Celsius to Fahrenheit, “it was only 14 degrees. People had to go outside and break down the wood on the trees to start a fire for tea so they could get warm.”

She told of men digging outhouses because there was no longer indoor plumbing. “The utility connection had been bombed. The team trying to fix it, they got shot,” she said.

She shared another story of an extended family member who was away from home during the first attack. She was able to stay with a friend for a little while until they ran out of food.

For many Ukrainians, the habit of tending a small garden and keeping chickens has been the difference between survival or starvation. “Many people still live off the land. That has been a good thing,” she said.

An ABC news report estimated that a quarter of the Ukrainian population have fled their homes – almost 10 million people – and thousands of civilians have been killed in the invasion.

The Outer Banks Ukrainian community has been invested in bringing awareness and relief aid to their homeland.

In early March, Ukrainian natives spoke at town council and commissioners’ meetings throughout the Outer Banks, giving speeches during the public comment portion of meetings to encourage awareness and financial support for Ukrainians struggling to survive.

The community has hosted prayer vigils and various fundraisers. On March 26 they held the “Gran Pollada” fundraiser dinner, selling a chicken plate, olivie salad and traditional beet soup called borscht, as well as offering raffle tickets. The fundraiser brought in over $6,000.

Why do Ukrainians living in the Outer Banks continue their efforts? “It’s already been a month. I’m so scared people will stop talking about it. The first person who died in the war is just as important as the person who died today. Their life matters just as much,” Forlano said.

“It’s our human character to get used to things regardless of how horrible it was. At first we couldn’t believe it, and now it’s like, ‘Okay it’s war.’ There is talk of using chemical weapons, and that terrifies me,” Kramarenko said.

Forlano is thankful that her family is in western Ukraine, away from the bombings. Her mother works to help the many thousands of refugees arriving in their city to find shelter. “She hears a lot of heartbreaking stories. It’s horrible,” Forlano said.

Despite the heartache, she is staying optimistic. “Every Ukrainian believes in victory,” Forlano said. “The truth is behind us.”

Kramarenko agreed: “There’s no way [Putin] wins. He might be stronger but he won’t be able to hinder 43 million people. We are fighting for our home.”

Dare says no to CenturyLink proposal, yes to new…