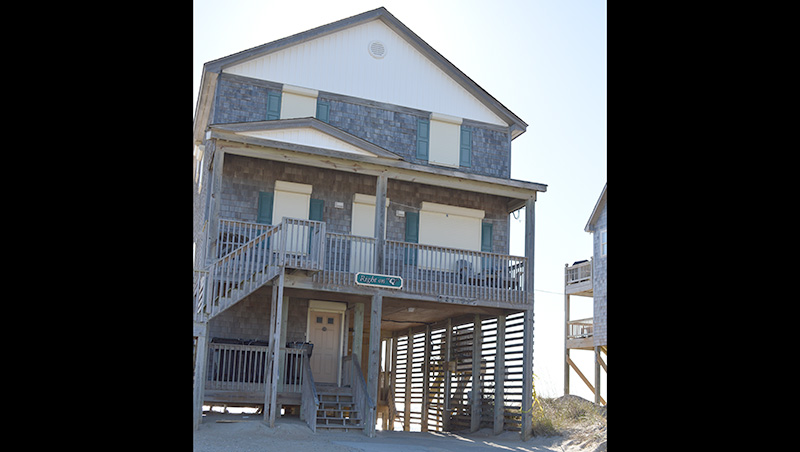 The owner of this oceanfront house at 24197 Ocean Drive in Rodanthe wants to move it to a vacant Dare County-owned lot at 24770 Ocean Drive. Dare’s Board of Commissioners agreed to the sale, subject to the upset bid process. M.H. Goodloe-Murphy photo

Eight Ocean Drive houses have been declared uninhabitable. Three houses slanted toward the ocean remain standing as of Monday, March 28, 2022.

Dare County has also declared four more houses uninhabitable. In the area opposite Island Convenience in Rodanthe, two more houses have been declared on Beacon Drive, one on G.A. Kohler Court and one on East Point Drive.

At the end of the Dare County Board of Commissioners March 21 meeting, county manager Robert L. Outten reported that Lubbersmunson LLC, of Phoenix, Md., property owner of 24197 Ocean Drive in Rodanthe, would like to purchase the vacant lot at 24770 Ocean Drive. The owner would move the four-bedroom, 2,110 square foot house from the oceanfront to the vacant lot on the cul de sac at the end of the Ocean Drive. The vacant lot, owned by Dare County, is valued at $180,000. The sale is subject to an upset bid process. Once the notice is published, anyone interested in purchasing the lot has 10 days to submit an upset bid.