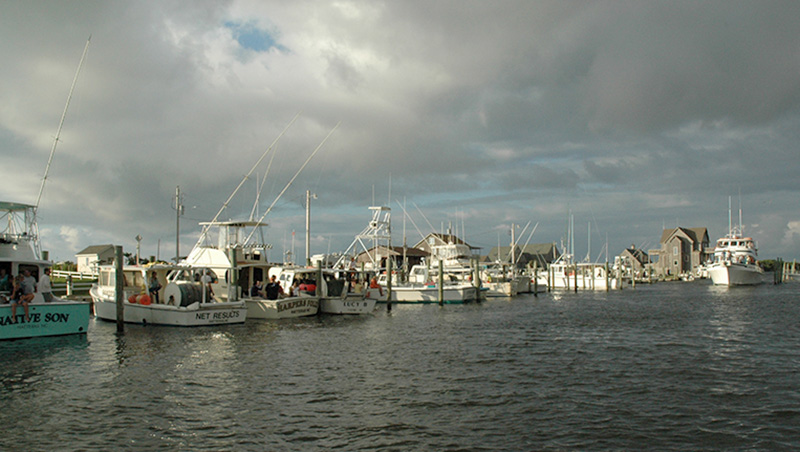 For the Blessing of the Fleet in September 2006, sleek for-hire boats, private boats, head boats, historic boats, commercial fishing boats line the dock in Hatteras Harbor for the blessing, which comes at the end of Day at The Docks. An economic impact study for Hatteras Island pegs the economic output of recreational and commercial fishing at $42 million. The Coastland Times file photo

Last September, the Dare County Board of Commissioners commissioned an economic impact study for Hatteras Island. E. Brent Lane was assigned the task. He produced a similar report in 2013 for the Outer Banks Visitors Bureau.

Lane, an economic strategist, is a fellow at the UNC Global Research Institute at the University of North Carolina at Chapel Hill. Lane also completed economic study for the Dare County Regional Airport in 2019.

For the 2022 report, he stated this conclusion: “Hatteras Island plays a disproportionately large role in the county’s economy.”

He based this assessment on “examination and calculation of economic impacts of four primary sectors of Hatteras Island economic activity…” Those sectors are real estate, tourism, recreational fishing and commercial fishing.

That assessed value produced an estimated $10.6 million in 2020 property tax revenues. Occupancy tax receipts generated in 2021 from Hatteras Island totaled $189.4 million. That is 24.6% of the Dare County total in 2021.

Tourism in Dare held its own during the pandemic. In 2020, North Carolina’s tourism industry suffered a 32 percent decline in visitor spending, reports Lane. Not so in Dare County. In 2020, Dare’s visitor spending was $1.41 billion, a decline of only 2.2% in that year.

To calculate the impact of Hatteras Island tourism, Lane put together an industry cluster, defined as “classifications of businesses that directly serve tourists.”

Lane writes “a healthy, dynamic industry cluster can be thought of as a wide-ranging fabric of firms that serve a target market.”

Lane used various sources to construct a model to estimate the economic impacts of the three sections of recreational fishing.

For example, an analysis of data from 2011 to 2020 found that 38.4% “of Dare County for-hire industry revenues were achieved by Hatteras Island activity.” That percentage was applied to the updated recreational fishing model to produce the impacts of for-hire fishing.

Dare County commissioners objected to this part of the report. Lane offered to do a supplement.

The report’s original paragraph continues: “The NCDMF [North Carolina Division of Marine Fisheries] reported that the 2020 value of commercial seafood landings in Hatteras Island was $3,582,611. Incorporating this value in the Hatteras Island economic model estimated the 2020 economic impacts (Table 8) of Hatteras Island’s commercial fishing as follows:

Dare commissioner Steve House concentrated on the number of jobs indicated in the report. House pointed out the figures did not include seafood processing.

Overall, in 2019, the Sea Grant report said that the commercial fishery produced an economic impact of $297.3 million and generated 5,528 jobs.

The north coast, of which Dare County is part, has a total impact of $78.6 million, with commercial fishing listed as $65.8 million, seafood preparation and processing at $5.4 million, fish markets and retailers at $5.3 million and seafood restaurants at $2.1 million.

The Coastland Times has reached out to Sea Grant asking for a breakout of Dare County information.

Dare’s commissioners asked for the economic impact of Hatteras Inlet, a major difference between the 2013 and 2022 studies.