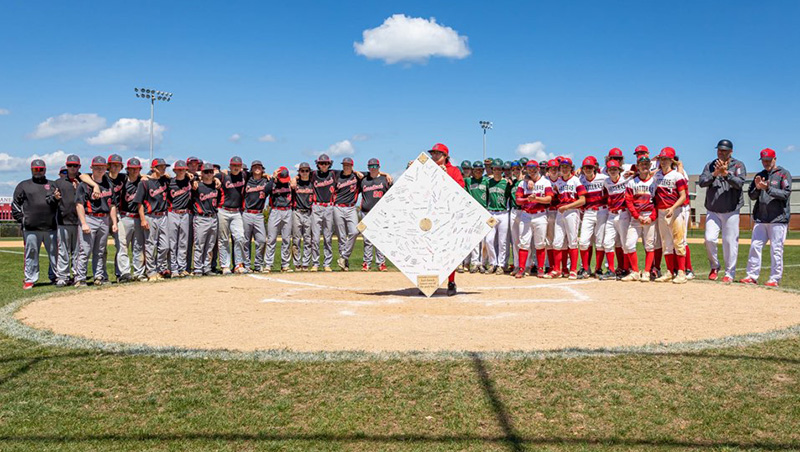 Over 200 fans in attendance at the Cape Hatteras Sandlot Tournament April 9, 2022 had a great day to enjoy some good baseball and island fellowship. The Green Hope Falcons took the championship trophy home in their first trip to the Sandlot.

Fans and players alike had an opportunity to show support of loved ones battling cancer by signing names to a large wooden baseball “infield.” The Sandlot tournament has become as much of a cancer awareness event as it has a baseball tournament since the passing of former Cleveland High School assistant coach John Jacobs in 2017. Jacobs was a longtime friend and rival of current Cape Hatteras coach Keith Durham.

The 2022 tournament was no exception with it being dedicated to people in our lives who have battled or are battling cancer. Prior to Game 3 on Saturday, all three teams gathered at home plate for a picture and a declaration that all will all strive to “knock cancer out of the park.”

John Jacobs Memorial Award for Selflessness, Excellence and Attitude: Crile Crisler, Currituck County. Jacobs was a former coach and teacher at Cleveland High School who died of cancer in 2017.

Scott Day Memorial Award for Strength and Dedication: Bobby Eakes, Cape Hatteras. Day was a former coach and teacher at Cape Hatteras Secondary School who died of cancer in 2014.