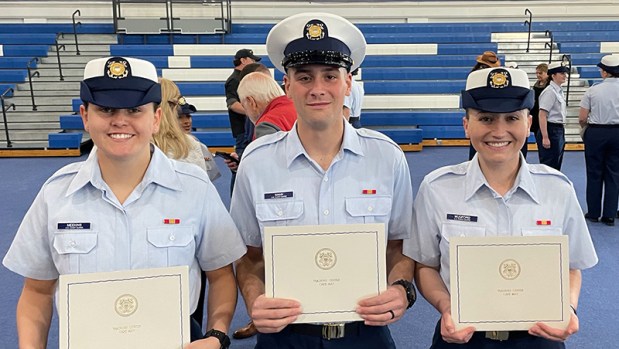 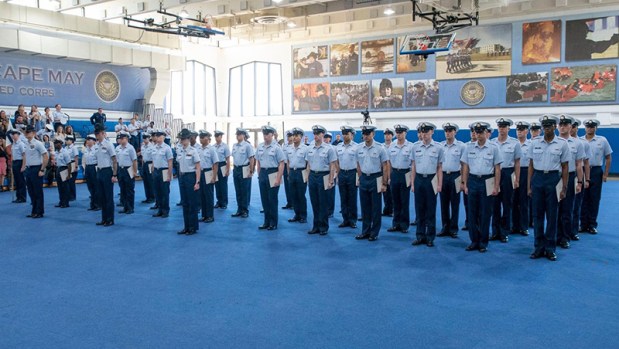 U.S. Coast Guard Seaman Collin B. Mann, son of Amy and Dewey Mann of Aydlett; Fireman Apprentice (FA) Lexus Meekins, daughter of Erin and Brian Meekins of Buxton; and FA Peyton Mugford, daughter of Kellie and Shawn Mugford of Buxton, all recently graduated from the U.S. Coast Guard Recruit Training Center in Cape May, N.J., graduating with 46 others as part of Recruit Company Xray 201.

During the eight-week training program, the graduates completed a vigorous training curriculum consisting of academics and practical instruction on water safety and survival, military customs and courtesies, seamanship skills, first aid, firefighting and marksmanship. A major emphasis is also placed on physical fitness, health and wellness.

Mann, Meekins, Mugford and other recruits also received instruction on the Coast Guard’s core values — honor, respect and devotion to duty — and how to apply them in their military performance and personal conduct. They will join 36,000 other men and women who comprise the Coast Guard’s force.

Commander Bradley Conway, the Executive Officer of Training Center Cape May, presided over the ceremony and advancement of the 49 graduates of Recruit Company Xray 201. Training at boot camp is difficult and approximately 20% of recruits do not graduate with their original company.