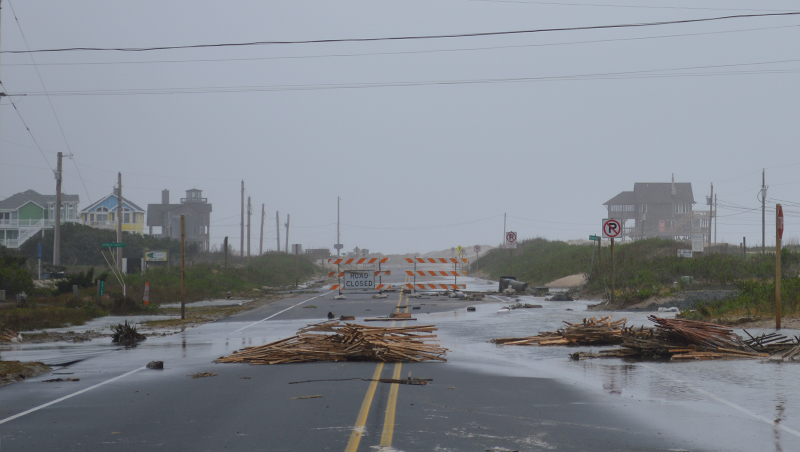 NC 12 in north Rodanthe was barricaded Tuesday morning. Debris littered the roadway. A North Carolina State Trooper was keeping watch with his vehicle’s emergency lights flashing. A few people waited in line for the road to open. The road between this barricade and the Oregon Inlet Bridge was closed to vehicular traffic around 4 a.m. on Tuesday, May 10 remained closed through the night. NCDOT workers are scheduled to return at 5 a.m. Wednesday morning. M.H. Goodloe-Murphy photo

Around 4 a.m. on Tuesday, May 10, 2022, NC 12 was officially closed from the Marc Basnight Bridge to Rodanthe. The highway remained closed through Tuesday night.

Tuesday’s ocean overwash hit all of the famed highway’s hotspots.

The overwash and two collapsed houses were powered by a strong low pressure system parked off the North Carolina coast. That system sent powerful surf and long-shore current along Hatteras Island, north of Cape Point.

In Pea Island National Wildlife Refuge, strong, angry surf completely wiped out the dune line opposite the refuge Visitor Center, which was hit by ocean water.

To protect NC 12, NCDOT crews are pulling sand from the west side of the road to establish a berm. A “bleeder has been opened to drain water off the roadway. The salt water is deep.”

At 2 p.m. Tuesday, the afternoon high tide was already sending saltwater onto NC 12.

Between Hatteras and Frisco, ocean water trickled over the dune.

On Tuesday, all ferries to and from Ocracoke were suspended.