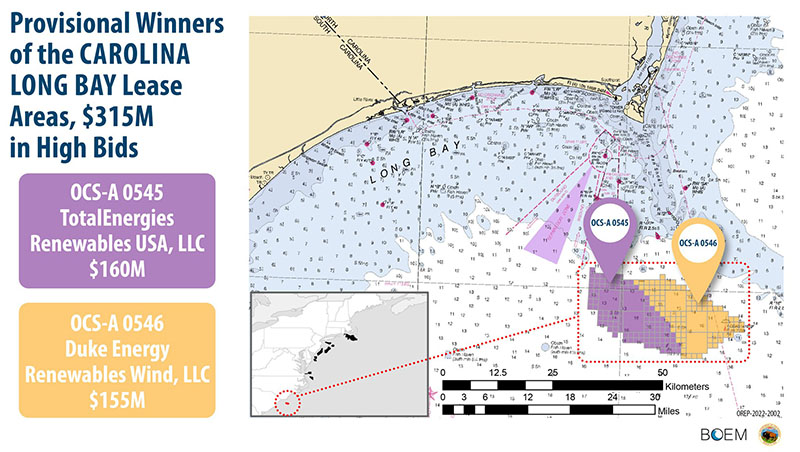 Two energy companies bid a combined $315 million in an auction for the rights to produce power from wind energy in two areas off the coasts of North Carolina and South Carolina, the U.S. Department of the Interior said.

The Bureau of Ocean Energy Management’s lease sale offered two lease areas covering 110,091 acres (44,500 hectares) in the Carolina Long Bay area, according to a news release from the department on Wednesday. If fully developed, the leases could result in about1.3 gigawatts of offshore wind energy, enough to power about 500,000 homes.

Before the leases are finalized, the U.S. Department of Justice and Federal Trade Commission will conduct an anti-competitiveness review of the auction and the provisional winners will be required to pay any balance on the winning bids and provide financial assurance to BOEM.

The leases are part of President Joe Biden’s goal of increasing clean energy generation and providing the United States with more independent sources of power and lowering electricity bills for customers, the U.S. Department of the Interior said in a news release.

The Interior Department has already leased wind power sites off New York’s coast and is planning to add sites off California and Oregon, the Gulf of Maine, the Gulf of Mexico and in the central Atlantic Ocean, according to a statement earlier this year.

Traffic mitigation plan in the works in Southern Shores;…