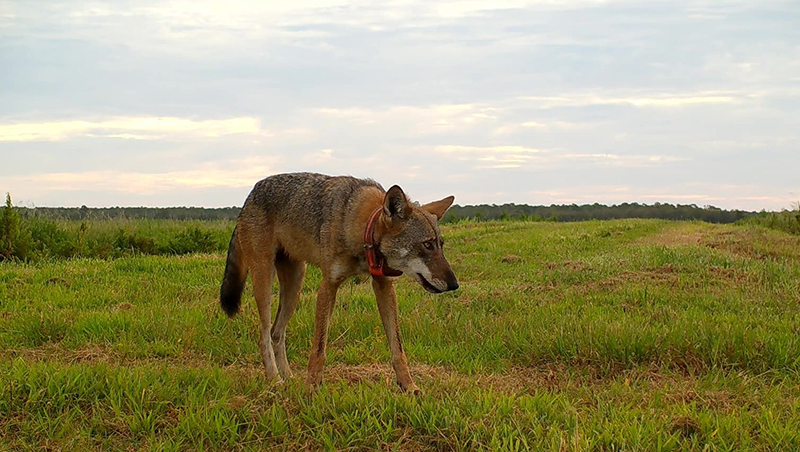 A federally-protected red wolf was found dead in Tyrrell County in a muddy farm field located south of Newlands Road on April 15. On May 13, the U.S. Fish and Wildlife Service issued a press release asking for the public’s help in the investigation of the red wolf’s death.

“The red wolf was shot in the spine, causing the wolf to collapse on the field,” stated the release. “The red wolf’s lungs were found to be full of mud during a later necropsy.”

USFWS is offering a reward of $5,000 for information that leads to the successful prosecution in this case. Those with information on the death of the red wolf should contact North Carolina Division of Refuge Law Enforcement Patrol Captain Frank Simms at 252-216-7504 or Special Agent Jason Keith at 919-856-4786 ext. 34.

“Red wolves are governed by the rules established in 1995 setting up the experimental, nonessential population,” stated the release. “This means that landowners may be allowed to remove a nuisance red wolf if it attacks their livestock or pets. Additionally, a red wolf that is taken incidentally to any type of otherwise legal activity (e.g., trapping coyotes following state regulations) on private lands in the red wolf recovery area does not constitute a violation of federal regulation provided that the taking is not intentional or willful and is reported to the Service within 24 hours.”

USFWS also stated that if someone accidentally kills a red wolf, they must report it by calling the U.S. Fish and Wildlife Service toll-free at 1-855-4-WOLVES (1-855-496-5837). “It is important to report red wolf incidents quickly so that Service personnel can minimize conflicts and retrieve any carcasses while they are still intact,” the release continued.

Waterways Commission gets tough news about piling installation for…