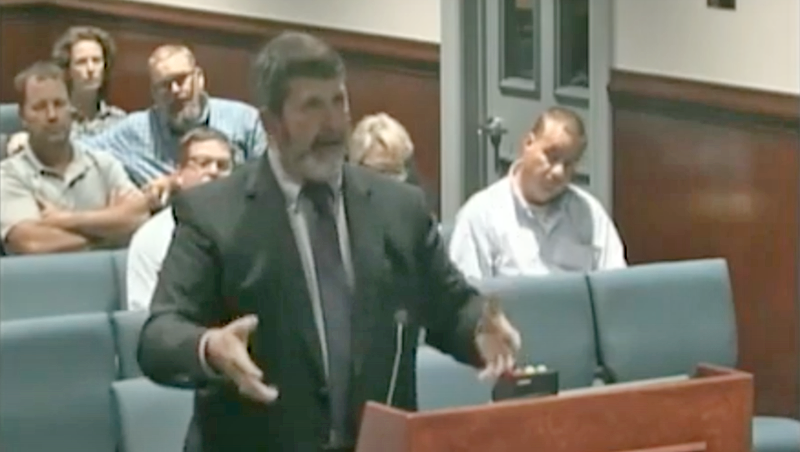 Win Bridgers, Division 1 engineer for NCDOT, gives a presentation to commissioners about the upcoming projects for the county. Still from Currituck meeting video

During public comment, resident Paulette Harris urged commissioners to address the safety hazard on Edgewater Road and Hwy 158 in Harbinger, which she says “is a nightmare.” According to Harris, drivers heading southbound on Hwy 158 will get into the turning lane early – as far up as the Sun Realty building – thereby making it dangerous for people trying to turn out of Edgewater Rd.

“We’re having too many accidents there,” she said. “[Southbound drivers] don’t want to give an inch and they just expect you to just let them ride on through, and they are nowhere near the turn to go into the driveway of a Dollar General . . . We need some kind of a safety precaution there that could save lives. Not only my life – the life of my neighbors, but also yours and yours and anybody else that happens to be traveling there,” she said to commissioners.

Commissioner Selina Jarvis, who also lives on Edgewater Road, agreed: “It is a daily – daily – taking my life into my hands anytime I leave my house,” noting that she was glad a representative from the North Carolina Department of Transportation was present at the meeting to address concerns. “If you put a camera on that road you would see at every hour a near miss, and it’s been less than a week that I’ve had one,” she said later on at the meeting.

Another resident from Edgewater Road, Horace Grey, said that he was “T-boned” at the dangerous intersection last year and suggested the installation of a traffic light.

Win Bridgers, Division 1 engineer for NCDOT, gave a presentation to commissioners about the upcoming projects for the county and proposed a possible solution for troublesome intersections like the one on Edgewater Road.

Engineers are looking into reduced conflict intersections (RCI), sometimes referred to as superstreets or J-turns, that restrict left turns on busy intersections. Instead, vehicles must make a right and then shortly after make a U-turn to join oncoming traffic.

For a video explaining how RCIs work, visit ncdot.gov/initiatives-policies/Transportation/safety-mobility/reduced-conflict-intersections/Pages/default.aspx.

Projects at the top of the list for NCDOT is NC 343 in Camden to 168/Old Swamp Road/South Mills Road, a modernization project to widen the road to allow it to accommodate traffic in a better manner than it does in its current condition.

“The next one on the list is one that’s near and dear to everybody – the Mid-Currituck Bridge,” said Bridgers, “which has been in the news enough lately. Everybody’s heard it – DOT won the lawsuit, an appeal was filed, and I believe an amicus brief has been or is being filed to actually try to have the court of appeals not even hear the appeal, so this project is continuing on regardless of that court case. Right now, we’re going to move on like we’re going to be successful in the court case, so that project is ongoing.”

The Mid-Currituck Bridge will connect US 158 and NC 12 and is anticipated to alleviate the traffic in Southern Shores and Duck that backs up heavily every weekend in peak season. The 4.7 mile bridge will span from Aydlett to Corolla.

Bridgers also gave an update for the Alligator River Bridge replacement. He said the environmental document is approved and NCDOT is continuing design work for the project at an estimate of $215,000. The construction of the bridge, however, is unfunded and NCDOT is in the process of pursuing a federal grant for construction.

According to Bridgers, in less than a year, the necessary agencies have collaborated and signed off on the project, a process that can take years. “Now all we got to do is find the money, but that’s the big question,” he said.

Locally, there are paving plans for roads throughout the county that are scheduled up to three years out. Residents can contact the county to find out what areas are slated for improvement.

Commissioners asked about drainage and whose responsibility it is to clean out the ditches – a job that DOT used to do. Bridgers responded, “One thing a former division engineer said, we don’t have the resources or the funding to do things we used to do. It just doesn’t exist. We just don’t have it. We have to concentrate on what we have to deal with which is essentially the right-of-way lines. But if there is an issue downstream and it is affecting us and we are contributing water to the watershed, yes, we will be a participant in that.”

Following Bridgers’s presentation, commissioners participated in a question-and-answer session with the DOT representative about specific road and traffic concerns in the county.