North Carolina man scores lottery jackpot of more than $260,000: ‘It really made my dreams come true’ 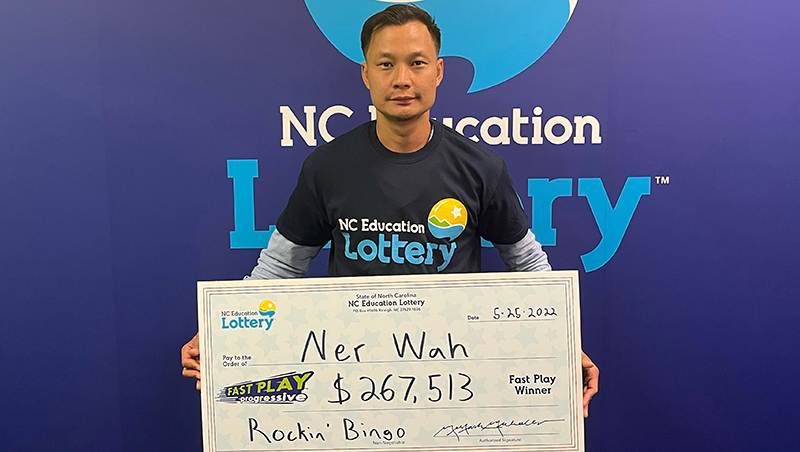 An eastern North Carolina man has won more than $260,000 and wants to use the money to help others, according to a press release from the North Carolina Education Lottery.

Ner Wah, 35, of New Bern, immigrated to the United States 15 years ago. He said he wants to help refugees who remain in Burma with part of his $267,513 Fast Play jackpot.

Wah said he lived in a refugee camp for 10 years before moving to the United States, stated the release.

“I want to help my refugee people back in Burma,” Wah said. “They need a lot of help.”

Wah bought the lucky $5 ticket on Tuesday at Klo Htoo Asian Market on Neuse Boulevard in New Bern. Wah said he had never bought a Fast Play ticket before Tuesday.

“My friend was in there playing and he asked if I wanted to try it,” Wah said. “I just had a feeling in my mind like I was going to win something.”

Wah said at first he thought he won maybe $20 or $30. “I was just happy because I thought it would be enough to cover my groceries,” Wah laughed.

When he realized he hit the jackpot, Wah said his whole body started to shake. “My hands and feet started tingling,” Wah said. “It really made my dreams come true.”

“Wah’s good luck with a Rockin’ Bingo ticket occurred just after the game returned this month for a new run,” stated the release. “He claimed his prize Wednesday at lottery headquarters and, after required state and federal tax withholdings, took home $189,962.”

Fast Play’s rolling, progressive jackpot increases with every ticket sold until it is won. On Thursday morning, the jackpot topped $300,000. A $5 ticket, like Rockin’ Bingo, receives 50 percent of the jackpot amount. The odds of winning a Fast Play jackpot are 1 in 320,000.

For details on how $5.6 million raised by the lottery made an impact in 2021, visit www.nclottery.com and click on the “Impact” section.