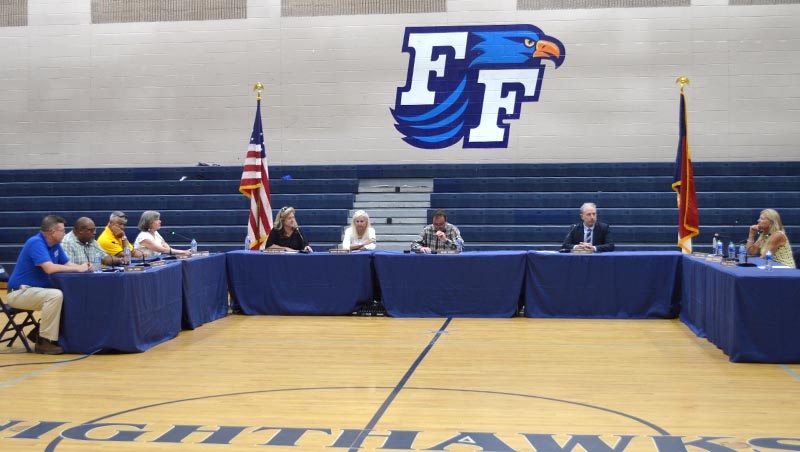 Dare County school board meets in First Flight High gymnasium for a special meeting on May 31, 2022. By a 6-1 vote, the board accepted an agreement with current Superintendent John D. Farrelly, who resigns effective June 30, 2022. Mary Helen Goodloe-Murphy photo

The Dare County Board of Education voted 6-1 on a settlement agreement, resignation and release of liability with Superintendent John D. Farrelly.

The meeting started 5:02 p.m. and the board immediately voted to go into closed session. The board trooped into the gym at 6:48 p.m. and board Chairman David Twiddy announced a recess until 8:30 p.m.

The recess ended at 9 o’clock and the board immediately went into another closed session.

Board members, the superintendent and board attorney Richard Schwartz emerged at 10 p.m. and moved into open session. Vice Chair Susan Bothwell make the motion to accept the agreement. Board member Joe Tauber cast the “no” vote.

A media release states: “Dr. Farrelly and the Board of Education have reached a joint determination that it will be in the best interests of Dr. Farrelly and the Board to conclude his time with the Dare County Schools on a mutually agreeable basis, in recognition of his accomplishments and appreciation for all he has contributed over his five years of outstanding leadership of the Dare County Schools.”

The document agreed to by both parties the board and Farrelly has the following elements:

– Also on the first day of each month, Farrelly will receive $1,252.36 to offset the cost of his COBRA health insurance coverage for himself and his family for up to 18 months. The benefit ends if Farrelly secures employment with health insurance benefits.

– The agreement confirms that Farrelly is resigning as of June 30, 2022 and that the board accepts Farrelly’s resignation.

– Farrelly’s performance evaluation for 2021-22 will not be completed.

– Farrelly acknowledges “his resignation and this release of liabilities are completely voluntary and made after careful reflection and consideration of his best interest and other options available to him.”

– “The parties jointly agree not to speak disparagingly of each other, their employees and agents.”

Tauber, reached by telephone on Wednesday, June 1, explained his no vote, saying he thought it best for both parties to move on, however he objected to the amount of money required by the agreement.

Mounting controversy had brought parents and citizens to Board of Education meetings for an array of issues. Some public comments made during those meetings seemed directly aimed at Farrelly. At the May 10 board meeting, Farrelly responded that he would “sit idle no longer” about comments he deemed defamatory. On May 12, he sent a strongly worded cease and desist letter to a public commenter, saying that person “made several false, slanderous, and defamatory statements about me in my role as the Superintendent of Dare County Schools during the public comments portion of the meeting.” During the public comment section of the May 10 meeting, that person had spoken about the results of an unofficial exit survey that she had conducted with 17 former Dare County Schools employees regarding their reasons for leaving the school system.

Farrelly stated in a May 25 press release that he had informed the school board that day of his intention to retire effective June 30, 2023. Notice was sent out late Friday morning, May 27, 2022 about a special called meeting of the Board of Education on May 31 “for the Board to meet with the Board of Education attorney in closed session to preserve the attorney-client privilege as provided in N.C.G.S. 143-318.11(a)(3); and to consider confidential personnel matters as provided in N.C.G.S. 143- 318.11(a)(6).”

The joint media release from the board and Farrelly issued after the special meeting says “the Board extends its appreciation to Dr. Farrelly for his dedication, his energy, and tireless work in leading our schools, implementing innovative programs and earning recognition for high levels of performance, with sound fiscal management and accountability. Dare County Schools have improved tremendously under his leadership and the Board is grateful for all that has been accomplished over the last five years.”