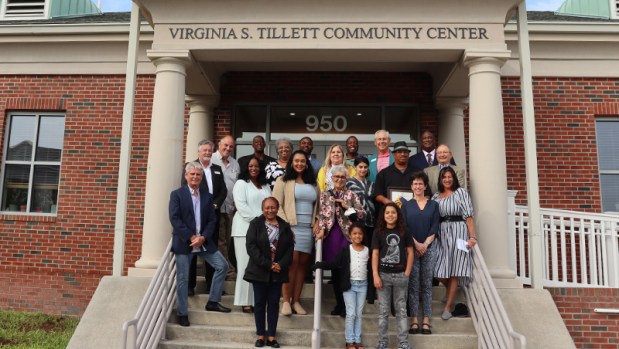 The family of Virginia Tillett stands with the Dare County Board of Commissioners on the steps in front of the Virginia S. Tillett Community Center. Courtesy Dare County 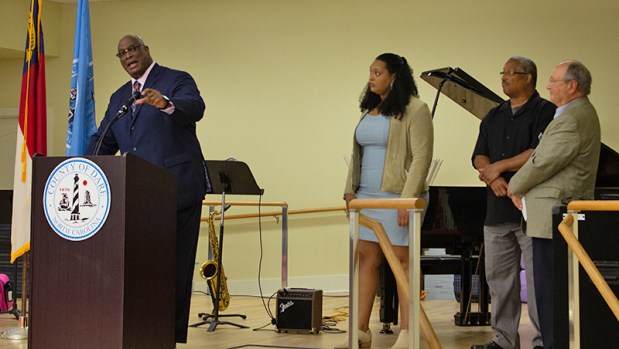 A building dedication ceremony was held earlier this month to formally celebrate the renaming of the Dare County Center as the Virginia S. Tillett Community Center. As part of the recognition, Dare County has also released a video of the event, which can be viewed below or at youtu.be/6OUguKgeZ7g.

Tillett, a longtime Outer Banks community leader and former elected official who died October 7, 2021, was instrumental in the development of the multigenerational facility that was designed to provide a variety of programs, activities and resources to Dare County citizens of all ages.

“We needed a multigenerational facility here on Roanoke Island,” Tillett said during an interview conducted by Current TV in April 2021, following the North Carolina Black Alliance’s announcement that she had been selected as a recipient of the organization’s 2021 Trailblazer Awards for the countless contributions she had made to the Dare County community during her 30-plus years of public service. “My belief was – having spent a lot of time with my grandmother – that senior citizens and younger people could get together and learn from each other. So we wanted that type of setup for our center here, and I’m pleased with the outcome of that.”

The multigenerational facility, which Tillett referred to during the April 2021 interview as being her “pride and joy,” officially opened its doors at 950 Marshall C. Collins Drive in Manteo on October 19, 2009. The facility provides an array of programs, activities and resources to Dare County citizens of all ages.

Also featured were remarks made by Betty Jo Shepheard, a field representative for North Carolina Senator Richard Burr, who was unable to attend the dedication ceremony. During her remarks, Shepheard read a letter penned by Senator Burr before presenting Tillett’s sons Johnny Tillett and Michael Tillett and granddaughter Maya Tillett with an American flag that had been flown over the U.S. Capitol in honor of Virginia Tillett and her three decades of service to the Dare County community.

Following Shepheard’s remarks and her presentation of the flag on behalf of Burr, a video message was played featuring North Carolina Governor Roy Cooper, who was also unable to attend the dedication ceremony that afternoon. At the conclusion of Cooper’s video message, North Carolina State Representative Bobby Hanig and North Carolina Senator Bob Steinburg also made presentations, during which the elected officials each presented Tillett’s two sons and granddaughter with flags that had been flown over the state capitol in her honor.

A series of brief comments were then made by Tillett’s sons and granddaughter, who later joined additional family members, close friends and the Dare County Board of Commissioners in the lobby for the official unveiling of a brand-new plaque designating the facility as the Virginia S. Tillett Community Center.

For more information about the Virginia S. Tillett Community Center and the programs and services the facility provides to members of the Dare County community of all ages, go to darenc.com/departments/adult-senior-services/dare-county-center-663.