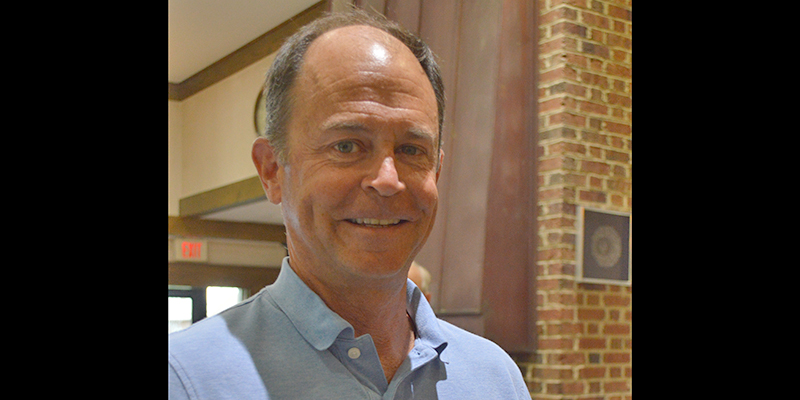 Tod Clissold will take his oath of office at the next meeting of the Manteo Board of Commissioners, scheduled for June 15 at 5:30 p.m. Mary Helen Goodloe-Murphy photo

Manteo’s Board of Commissioners saluted commissioner Jason Borland at his last meeting, then quickly elected Tod Clissold to fill the vacant seat.

Additionally, the board adopted the town’s budget for fiscal year 2023 at its June 1, 2022 meeting.

Mayor Bobby Owens waited to call on Borland last to make commissioner comments, when he formally announced he was stepping down. “It has been an honor and a pleasure,” said Borland, who is relocating to northern Virginia.

“You have been a total asset to the Town of Manteo,” said Owens. “You’ve always had an open mind.”

Commissioner Eddie Mann said he was “proud to serve with Borland.”

To Borland, commissioner Sherry Wickstrom said, “I absolutely loved working with you.”

Before the brief June 1 meeting adjourned, Wickstrom sought the floor and nominated Clissold to fill the seat vacated by Borland for the remainder of Borland’s term, which ends December 2023.

Owens concurred with the nomination.

Town attorney Ben Gallop confirmed that a board vacancy existed.

The board voted unanimously to seat Clissold, who owns Poor Richard’s Sandwich Shop on the Manteo waterfront.

Clissold will take his oath of office at the board’s next meeting, scheduled for June 15 at 5:30 p.m.

In budget action, the commissioners approved an amendment to the existing budget, transferring $2,000 in police grants to community policing. The grant, Project A-Game, is funded by 7-Eleven and received by the town. Police Chief Vance Haskett applied for the grant to support youth in Manteo.

The fee schedule was approved.

The commissioners approved a general services contract with Green Engineering PLLC for the ultraviolet disinfection and resiliency upgrade project at the Town of Manteo’s Wastewater Treatment Plant. Green will produce an engineering report, a design and bid package and an operation and maintenance manual.

During public comment, Rodney Benson asked the commissioners to consider making Agona Street one way and creating a bike and walking lane. Town staff will investigate the idea.