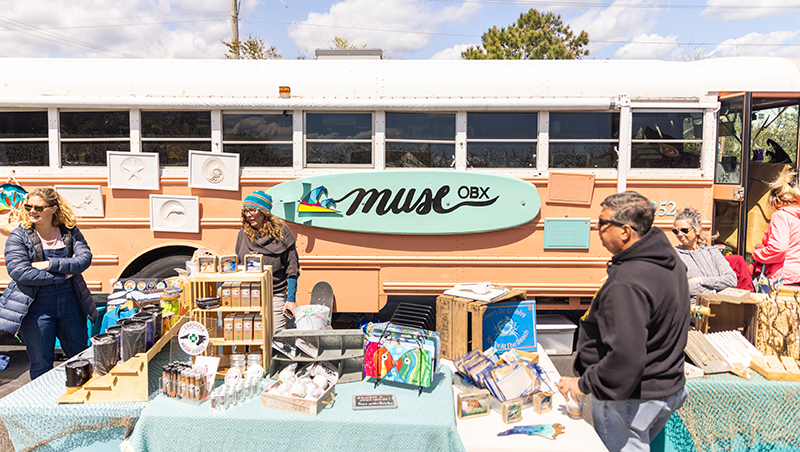 Ami Hill, owner of mobile art gallery #Bus252 and Muse Markets, filed a lawsuit against the Town of Kill Devil Hills on June 7 after the town denied Hill’s application to set up her gallery each Monday at Outer Banks Brewing Station from 5-9 p.m. from June 6 to September 6.

Hill owned art consignment shop Muse Originals OBX in Kitty Hawk until she closed it down because of the pandemic. She then renovated an old school bus with a desire to take her artwork on the road.

According to her lawyer’s website, “Her plan was to park #Bus252 throughout the Outer Banks area – different locations on different days – to maximize exposure for new and accomplished local artists and artisans and deepen the community’s appreciation for the abundant talent in their midst. She also invited additional local artists to set up their own tables in a bazaar-like setting she called Muse Market.”

Hill is being represented pro bono by Pacific Legal Foundation, which is claiming that Hill’s lawsuit is challenging a town ordinance that requires itinerant vendors who wish sell during peak season (May 1 to September 30) to donate 100% of their profit to charity.

“The town cannot condition an itinerant vendor’s right to earn a living on surrendering profits or going to the Board of Commissioners for permission each time they want to sell,” said Pacific Legal Foundation attorney Donna Matias in a press release. “Ami and business owners like her have a right to the fruits of their labor under the North Carolina Constitution.”

The town ordinances in question, § 111.05 and 111.06, discuss the regulation of charitable special events. The town code reads: “Charitable events with itinerant vendors not donating proceeds to a charitable organization or for-profit itinerant vendors are permitted between September 30 through May 1 and subject to the requirements of § 111.05 and itinerant vendors shall be allowed as part of the event subject to the following provisions . . . The permittee shall be required to donate 100% of the profits realized, after expenses, to a charitable organization that is recognized as tax-exempt and non-profit . . .”

In other words, traveling, for-profit vendors are not allowed in Kill Devil Hills unless they’re part of a special event.

If, however, the traveling vendor is part of a charity event, there are regulations for those events, namely that the charity event has to be an “event” (rather than ongoing) and they give all proceeds to charity.

During the off-season (September 30-May 1), charitable events with for-profit vendors are allowed if vendors agree to donate 100% of after-expense profits – not to be confused with proceeds – to a registered charity.

Hill was requesting a special exception from the Board of Commissioners, which is allowable under town code § 111.03.

At the meeting, Guns said, “The other concern that staff does have that we want to bring to the board is that because of this application being really more of an itinerant vendor than an event, additional applications will probably come to the board similar to this – for simply an itinerant vendor that they are their own event. Essentially what we’ve gotten out of our correspondence with her is that she is the event, and that does bring some concerns, and particularly for our brick and mortar businesses. Summer months are when they need to thrive and if they have competition that doesn’t have overhead, doesn’t require employees, doesn’t pay any of our tax base, it may be a conflict.”

Mayor Ben Sproul replied to Guns and the other commissioners, “If I understand history correctly, we had a problem with all sorts of folks trying to vend in the neighborhoods and beach accesses and in every parking lot on the beach, selling hot dogs and all [sorts of other things]. This is about trying to balance the nature of the community that we have versus the sort of freewheeling past that can’t really exist anymore.”

A mediating factor for the situation could have been First Flight Market, a weekly market started by the town last year that features local farmers and artisans.

According to the Pacific Legal Foundation’s press release, #Bus252’s application to participate in the market was rejected. The release also states the market is “in direct competition with Hill’s Muse Market.”

Commissioners and staff indirectly discussed the market and #Bus252’s participation in it at the May 26 commissioners meeting when they cited the size requirements for each First Flight Market vendor, which is a 10×10 space “to keep it equitable,” according to Guns.

KDH town attorney Casey Varnell delayed response to The Coastland Times regarding the lawsuit until he had time to review the case.