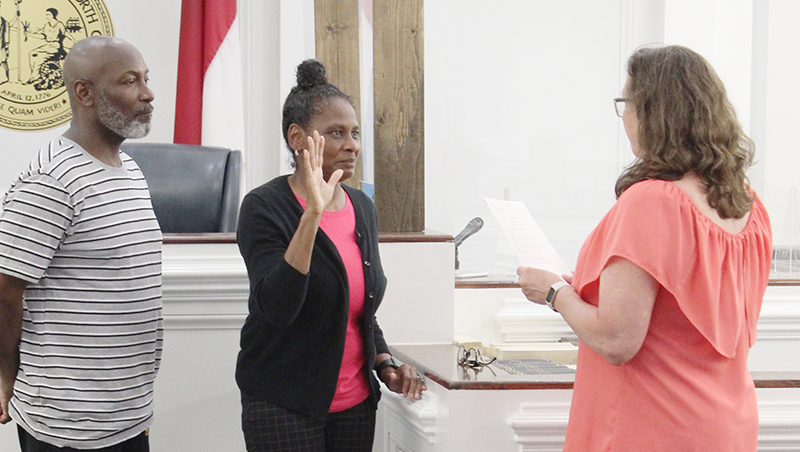 Valerie Phelps being sworn in as new director of the Tyrrell County Department of Social Services – with husband Kelvin Phelps by her side – by clerk of court Angie Sexton. Courtesy photo

Valerie Phelps was recently sworn in as director at the Tyrrell County Department of Social Services and is reported to be the first African American to hold that position.

Phelps, the youngest of five children, was born and raised by her mother in Columbia. She and husband Kelvin Phelps have been married for 24 years and have two children.

Before deciding to go back to college and get her degree, Phelps was employed for nine years at Columbia Pharmacy. With support from her husband and children, she earned a bachelor’s degree in business administration from Mount Olive College and a master’s degree in human services from Liberty University.

Phelps was hired at Tyrell DSS in 2008 as an adult Medicaid caseworker and became a social worker in children services in 2015. She was promoted soon after to social work supervisor.

“Against all odds, she has managed to rise to any challenge,” stated the announcement of her appointment. “Ms. Phelps is living proof that with hard work and determination, anyone can succeed.”