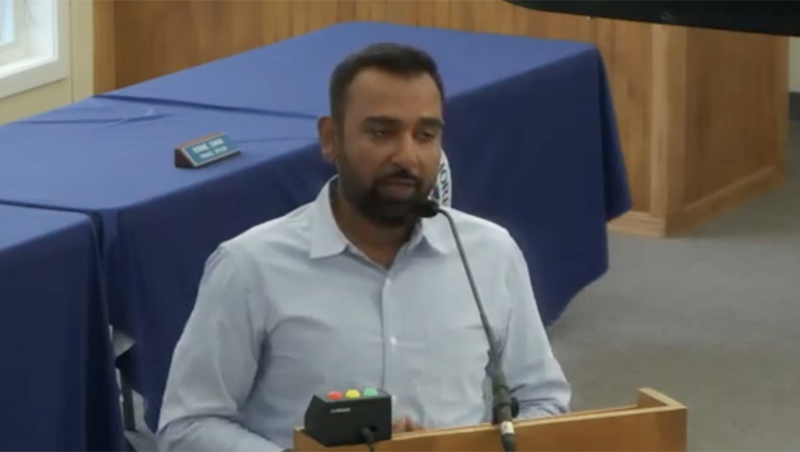 After months of hard work on the part of the Southern Shores Planning Board and applicant Ginguite, LLC, the Southern Shores Town Council approved a zoning ordinance amendment at the June 7 meeting that would allow residential housing as part of certain commercial properties.

Gupta’s original plan was for a regular commercial development in the commercial zone. However, with the need for additional housing in town and the rising popularity of mixed zone communities (for example, condos with an ice cream or coffee shop on the main floor), he decided to pursue a change to the town’s ordinances.

One of the main points of discussion was lot coverage – or the size of the footprint the building and parking lot. For residential areas, allowable lot coverage is 40%. For commercial areas, it’s 60% (or 67% if the developer opts for permeable pavement). The planning board decided to meet in the middle and suggested 50% for this mixed zone.

Gupta objected, saying, “I feel like this development shouldn’t be penalized for trading off commercial to residential. And if you look at some of the surrounding townships and counties that allow mixed use of residential and commercial, the majority of the lot coverage is 60 percent and some go to 65 to 70 percent in a mixed use, so I believe we’re consistent with that.”

In the discussion during the meeting, council members nixed this requirement.

They did, however, keep the stipulation that the residential portion – building footprint and parking for residential uses – must be between 25-40% of the total lot coverage. The planning board thought that made sense because the max lot coverage for residential areas is already a max of 40%.

Council member Paula Sherlock asked Gupta what he is envisioning for the 5-acre parcel near Jean Guite Creek. “We have done a lot of planning on that specific property and we do want to take advantage of the waterfront and create a walkway there, make a place for boats to pull up there as well, and do a charming village. We have it really all planned,” he replied.

Sherlock said before casting her vote, “In this community there is a need for more housing options for people, not just affordable housing – although that certainly is an option – but just an option for people who don’t want to live in a five-bedroom house anymore and are looking for something else, and now those options are just extremely limited. I also know that Southern Shores doesn’t love a lot of commercial development and so I love this concept of mixing the two.”

Gupta’s plan for the space is luxury condos, though he mentioned his company has a desire to build multi-family homes in another location.

The council made a couple of adjustments to the planning board’s recommendations and then passed the amendment 5-0.

Also during the meeting, town attorney Ben Gallop announced that he is leaving the law firm Hornthal Riley Ellis & Maland and starting his own solo practice. Gallop will no longer represent the town; Hornthal will serve as the new town attorney after July 6.

Kole stated that the department trains at the school a minimum of three or four times per year and does much of its active shooter training at the school. Kole said that officers walk through the school at least two or three times a day, in addition to the school resource officer.

“I can assure you that our biggest problem is going to be keeping some of the off-duty officers in plain clothes out of the inner perimeter, because you know as well as I do, in our department we’ve got at least a couple of people, they’ve got kids in that school,” Kole said. “So I can tell you that there’s not an officer on this department that wouldn’t go in immediately and that’s how we’ve trained ever since Columbine.”

In other new business, council members approved the fiscal year 2022-23 budget. Changes to the recommended budget include an increase in land transfer revenue to offset an increase in cost-of-living adjustment from 3.5% to 5%.