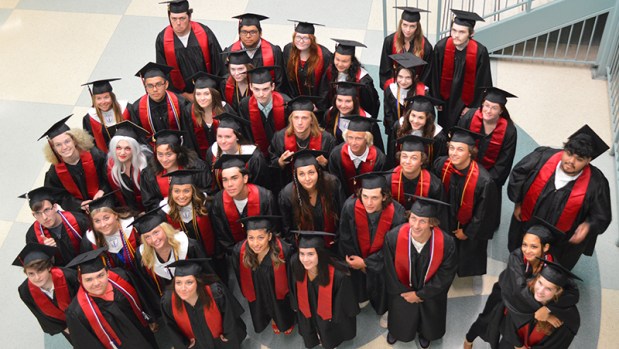 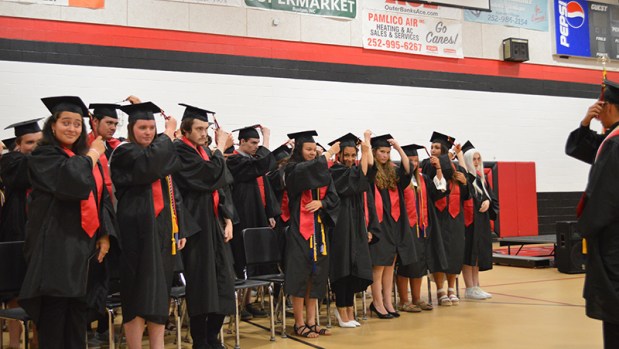 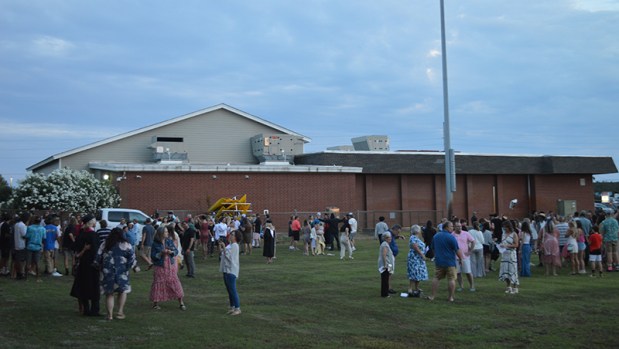 After commencement, families and Cape Hatteras Secondary School graduates gather on the athletic field for photographs with the sun setting over the Pamlico Sound. Mary Helen Goodloe-Murphy photo

Commencement for the Class of 2022 at Cape Hatteras Secondary School drew a crowd of about 600 people to the campus gymnasium in Buxton on Saturday evening, June 11, 2022.

The class was called “small but mighty.”

Ashlee Garcia, the class sponsor and a special education teacher at the Hatteras Island school, served as guest speaker and told the class “we are mighty. We are resilient.”

She told the class “you taught me how important resilience is.”

The Class of 2022 at Cape Hatteras Secondary School numbers 41 students. Student speakers for the class underscored the events of four years.

In opening remarks, Clara Oden in English and Amayrani Melanie Ascenio Ramirez in Spanish said “this class has endured and overcome exceptional uncertainties.”

The duo opened the program. “Education is about growth, not just grades. We have adapted and grown in these difficult times.”

Citizenship award recipient Jobell Porter said she remembered arriving nervous for her ninth grade year. That year was “the only normal year of high school” for her class.

Salutatorian Elizabeth Muller said the years were filled with obstacles. First, a hurricane blew the roof off the very room where all were gathered for graduation. Then COVID-19 came and the class experienced virtual school, an outside prom, canceled sports and few gatherings.

“We faced every problem that came our way and persevered.”

She charged “channel your inner Dory and just keep swimming . . . We got this!”

The class wondered what the senior year would be like. It was “normal.”

The class went to Busch Gardens, had senior skip and beach days, and found time to prank the school building. The class gathered for a senior celebration and received $211,895 in scholarships. The class also won the spirit stick.

Valedictorian Emily Bayne joined other speakers in praising and thanking the community, parents and teachers. “The community got us through. The community is so generous.”

Cape Hatteras Secondary Principal Beth Haneman-Rooks praised Citizenship Award recipient Jobell Porter as a person who serves others, actively engages with others, works to meet the needs of others and stands up for others.

Attending the 2022 commencement were Board of Education members Susan Bothwell, Frank Hester and Margaret Lawler. Making the declaration of commencement was Acting Superintendent Sandy Kinzel.

Serving as marshals for this commencement were Chief Marshal Addyson Wilson with Lucas Blankenship, Oralia Cirisa and Casia Ensenat. Jonah Jordan was also named a marshal, but missed the ceremony due to a death in his family.