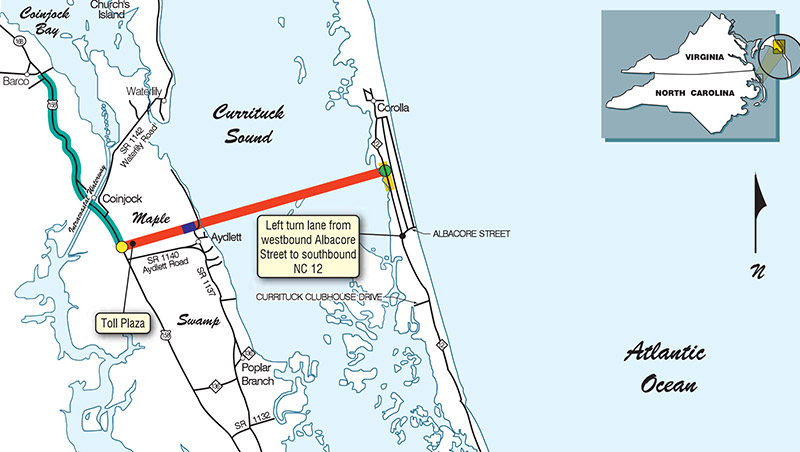 The Southern Shores Town Council drew together a coalition of neighboring municipalities and interested local organizations in support of construction of the long-delayed mid-Currituck bridge and authorized its town attorney to file an amicus brief in the appellate case now blocking construction of the bridge. The Town of Southern Shores issued a press release on June 23 announcing the filing of the brief.

The amicus curiae (friend of the court) brief was filed on June 13, 2022 in the 4th Circuit Court of Appeals and is the first and only filing by local communities impacted by the delay in construction of the bridge, according to the release. The Town of Duck, Currituck County, Dare County Tourism Board, Duck Community and Business Alliance and Currituck Chamber of Commerce join Southern Shores as appellees.

The release states that, in addition to the appellees, Southern Shores’ efforts are supported by strong resolutions in support passed by local governments and business organizations, including Dare, Chowan, Perquimans, Camden and Pasquotank counties, the towns of Kills Devil Hills, Nags Head, Kitty Hawk, the Albemarle Rural Planning Organization, the Outer Banks Association of Realtors and the Outer Banks Home Builders Association.

“Due to development on the northern beaches, the Town of Southern Shores has experienced a tremendous increase in the amount of traffic on its residential streets as summer vacationers attempt to take short cuts to Duck and Corolla,” stated the release. “Summer traffic creates long backs up and congestion on internal streets making it extremely difficult for residents to leave their driveways, as well as reducing the response time of emergency services.

“In addition, because Southern Shores residential streets are maintained by the town, the additional wear and tear by thousands of vehicles every summer weekend creates a financial burden for the town,” the release continued. “The Mid-Currituck Bridge will provide much-needed relief on Southern Shores streets by providing a second means of access to the northern Outer Banks and will also provide a much-needed evacuation route during storm events.”

“The Mid-Currituck Bridge is vital to improving the quality of life for our residents and visitors,” said Southern Shores Mayor Elizabeth Morey. “We feel as though this Amicus Brief will help strengthen and further acknowledge the efforts of the Town to finally see the bridge built.”

Judge Louise Wood Flanagan of the US District Court for the Eastern District of North Carolina ruled in December 2021 against the Southern Environmental Law Center’s suit to stop the bridge project and affirmed that NCDOT has complied with all federal and state environmental regulations in its plans to construct the bridge. The SELC since filed the appeal in the 4th Circuit.