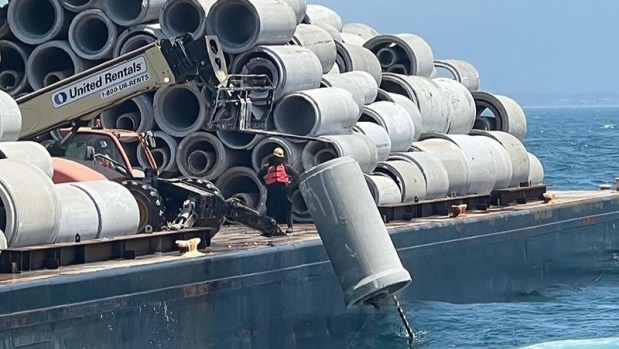 Concrete pipe being deployed on AR-430 and AR-460. Courtesy NCDMF 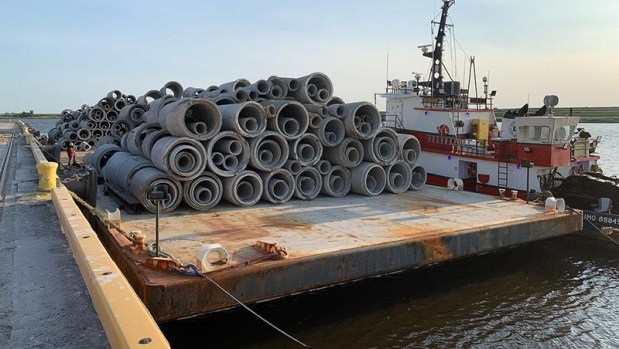 The North Carolina Division of Marine Fisheries’ Artificial Reef Program completed several reef enhancements during the last weeks in May, reported a press release recently sent out by the agency.

The program completed the disposal of the old Oregon Inlet bridge, part of a multi-year effort with the North Carolina Department of Transportation. This project included 68 barge loads of bridge material, totaling approximately 80,000 tons of concrete. The material was transported to eight different reef sites: AR-130, AR-140, AR-145 and AR-160, all off Oregon Inlet; AR-250 and AR-255, both off Ocracoke Inlet; AR-320, off Beaufort Inlet; and AR-340, off Bogue Inlet. This was the largest amount of material associated with any artificial reef project in the history of the Artificial Reef Program, stated the release.

Two reefs in Long Bay (AR-430 and AR-460) each received approximately 1,500 tons of recycled concrete pipe. This project was funded by Coastal Recreational Fishing License revenues and created new fishing opportunities for anglers in Oak Island, Holden Beach and Ocean Isle. All 3,000 tons of concrete pipe was donated, including approximately 1,100 tons donated from Columbus and Bladen County DOT yards. Much of this pipe was damaged during Hurricane Florence and would have otherwise cost DOT $65,000 for disposal in a landfill.

The Artificial Reef Program partnered with two external organizations for memorial reef projects: Veteran Memorial Reefs and Eternal Reefs. Each of these organizations place cremated ashes of loved ones in concrete reef structures or reef balls which are later deployed at a reef site. These memorial markers and reef balls were placed at AR-372 off Wrightsville Beach and AR-360 off Topsail, respectively. Family members were able to attend the deployments of the memorials.

The Artificial Reef Program partnered with the Coastal Conservation Association of North Carolina to enhance AR-291, near Bayview, in the Pamlico River. Materials were purchased by CCA from Natrx, a Raleigh-based company who 3D printed 100 concrete reef structures for this project. The deployment of these structures was funded by a U.S. Fish and Wildlife Service Sportfish Restoration Grant that supports the Artificial Reef Program. Anglers in the area can look forward to speckled trout and striped bass fishing on the reef this summer and fall.

An artificial reef is a manmade underwater structure, typically built to promote marine life in areas with a generally featureless bottom. In North Carolina, they serve as crucial spawning and foraging habitat for many commercially and recreationally important fish species.

The Division of Marine Fisheries maintains 68 artificial reefs, located from estuarine waters to 38 miles from shore. They are situated so that they can be reached from every maintained inlet in the state, stated the press release.

For more information about the program or the vessel sinking, contact Artificial Reef Program coordinator Jordan Byrum at 252-808-8036 or Jordan.Byrum@ncdenr.gov.