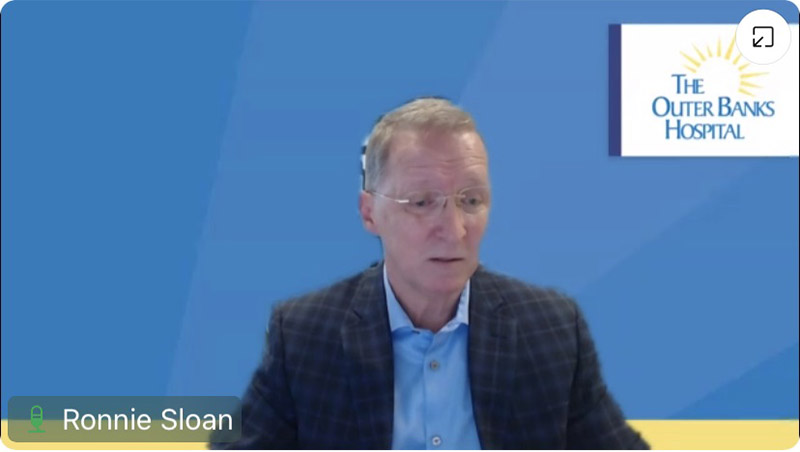 Ronnie Sloan. Still from video meeting of The Outer Banks Hospital Board of Directors

Ronnie Sloan, president of The Outer Banks Hospital, gave a virtual presentation last Friday, June 24 to the hospital board of directors, members of media and community representatives about concerns involving access to primary care and the provider shortage at Outer Banks Family Medicine – Manteo, following a letter sent to 2,418 patients informing them that they needed to seek primary care elsewhere.

The 18-minute presentation communicated three main things: empathy for the patients that are forced to look as far as Chesapeake, Edenton or Elizabeth City for care; an explanation for why this happened; and what OBH is currently doing to recruit providers.

According to Sloan, the two temporary contracted providers in Manteo chose not to renew their contracts and the two providers remaining at the practice were not able to take on additional patients.

The North Carolina Medical Board requires that providers give 30-days’ notice if care can no longer be provided. “We – myself and staff – did everything humanly possible to avoid having to send it because we knew how it would impact the patients receiving the news, but in the end we just simply had no choice,” Sloan said of the letter.

Patients currently on medication prescriptions can receive help with refills for up to 30 days, but no longer according to law, said Sloan. This leaves many patients in a lurch, scrambling to find care and forced to search, in some cases, over two hours away.

Sloan confirmed that the Manteo practice is not closing and there are plans in the future for expansion. The 2,418 people who received letters will be notified by mail with instructions on how to be added to the waitlist to reestablish care when new providers are hired. One provider is under contract and set to arrive at Outer Banks Family Medicine – Manteo in mid- to late-July. Others are in the hiring process and former patients will be notified by mail once provider contracts have been signed and a start date is established.

But the bigger question is, why were thousands left without a primary care physician in the first place?

Sloan explained that there are many factors that contributed. Several physicians retired after a long career, several transferred from primary care to urgent care and several relocated to be closer to family. Seven providers left when another health care system closed practices in Manteo and Kitty Hawk and several non-hospital practices closed in the area, it was reported.

Beyond that, he noted, the pandemic has taken its toll on the medical field and many health care workers have left due to burnout. And the situation nationally is not getting any better. Citing an AMA study, one in five physicians and two in five nurses intend to leave the practice in the next two years.

He also said housing prices make it difficult to recruit, along with the fact that family practice positions pay the lowest in the field. Sloan said there are 3,800 openings in North Carolina alone for family medicine and data has revealed that the graduating primary care residence class has an average of 90 viable job openings to consider, and many are selecting locations with a lower cost of living and more metropolitan regions. “Although we dearly love it here, it’s not always for everyone,” he added.

And the answer is not as simple as offering a higher salary, said Sloan. He reported that Stark Law prevents organizations from offering salaries above the fair market value. “The law is in place so that we can’t otherwise incentivize physicians to send referrals to us, which means they can practice medicine and send their patients where they believe they’ll receive the best care. We believe that patients have the right to choose where they go. Stark Law helps maintain ethical practice so that patient rights are protected,” he said.

To help address the housing crises, the hospital owns 12 properties that they use for temporary employment situations and they are currently involved in discussion with developers in Kitty Hawk, Kill Devil Hills, Nags Head and Manteo to acquire additional workforce housing.

Sloan then explained current efforts at recruitment since 2018, a lengthy process that can take up to a year. Out of 44 candidates presented to the hiring service line, nine were eliminated from consideration due to failure to meet background check or quality standards and the remaining 35 were interviewed or are in process. Of those 35, 14 declined to proceed through the hiring process citing housing, cost of living and scope of services and amenities; six have accepted offers – two primary care doctors, two hospitalist advanced practice physicians (APP), one oncology APP and one urgent care APP; and 10 more candidates are outstanding with different levels of engagement, including two offers currently pending for a family medicine doctor.

“At the risk of sounding a little defensive, we are not asleep at the wheel, and we did not just wake up. I know you all know this, but I just had to say it. The national primary care struggle is real, and it has hit home,” Sloan continued.

He said TOBH released an engaging ad in January, among others, that was sent to 25,000 primary care physicians as a recruitment tool. In the meantime, the hospital employs “locum staff” or traveling healthcare workers to fill the gaps in service, at a hefty price tag. Since fiscal year 2021, locum costs for physicians have increased 79% and team member traveler costs for nurses, MRI technologists, lab technologists and others have increased 522%. This translates to $4.7 million only eight months into the fiscal year, up from $1.6 million last year for temporary providers and health care workers.

Until more permanent staff can be hired, TOBH is utilizing help from its virtual platform Vidant Now for refills, from its urgent care centers and centers for healthy living and from Chesapeake Regional Medical Group. According to Sloan, innovative models for care are also being explored for primary care like telehealth and APPs and others “so we can open up as many services as we can locally.”