Currituck approves preliminary plat for 55-plus community in Moyock 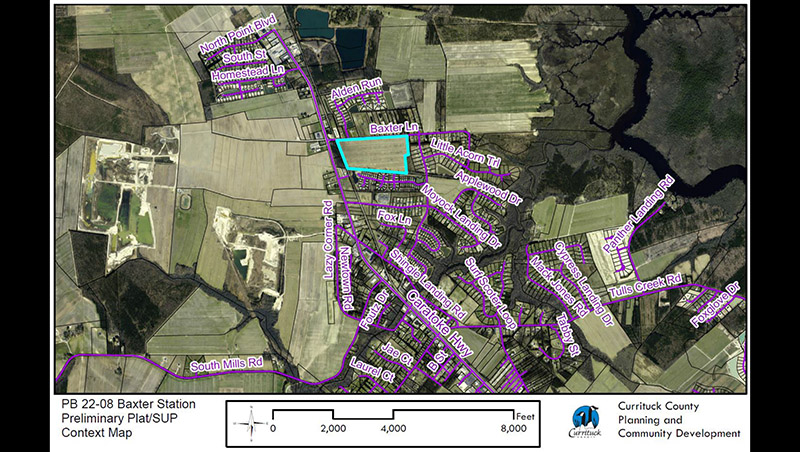 Currituck County commissioners approved a preliminary plat/special use permit for Baxter Station, a 55 and over residential community in Moyock Township at the June 20 regular commissioners meeting.

The development will be located off Baxter Station Road east of Caratoke Highway across from TowneBank, just south of the residential community Windswept Pines. Last November, the board rezoned the 53.5 acre parcel to conditional mixed residential (CMXR). According to development services director Kevin Kemp, the CMXR district is designed to accommodate a variety of residential uses with communities that are well designed with a creative use of the open space.

Baxter Station will have 20.4 acres of open space – far above what is required by county ordinance – and will include a large water feature along Baxter Road, a community park, dog park, sidewalks, a garden area with benches and tree-lined streets.

As in November, commissioners expressed concern over the potential for adding to the burden of the already maxed-out school capacity in Moyock and asked for confirmation that the community would not at a later date adjust its HOA rules to allow children.

During the quasi-judicial hearing, which is a trial-like hearing where commissioners act as unbiased court and make a decision based on only expert testimony presented by the developer’s lawyer, experts assured commissioners that not only do residents themselves of retirement communities prefer this requirement, any changes must go through the HOA and the board of commissioners. Residents must also sign restrictive covenants and submit age documentation on a regular basis.

Other experts testified that considerations had been made for stormwater and traffic effects, and that the development would not negatively affect neighboring property values.

During public comment, Richard Truran, who lives at 151 Baxter Lane, said he thought the idea of another development in the area is “unbelievable.” He added, “We still have a water problem that is not fixed… where is the water going to go?” and proceeded to show commissioners pictures of water overflowing the ponds and running onto his land. Citing ditches plugged up with weeds, he said, “The water has nowhere to go but on my land.”

Lead engineer Mark Bissell said that the ditch has since been cleaned out, and North-South Development Group owner Jason Old said that the location of Truran’s land – with significant acreage between his home and the proposed development – made his concerns “irrelevant” to the application.

During public comment, tourism director Tameron Kugler shared that the county was named a semi-finalist for a public inclusive art project with The Z. Smith Reynolds Foundation and plans to create a statue or a monument honoring John Jasper White, otherwise known as Currituck Jack, an enslaved sailor during the Revolutionary War period. Kugler and her team will gather information, seek community input and meet with an artist in the coming months.

Commissioner Paul Beaumont spoke up during commissioner reports about “the unruliness that was raining in Corolla” last week. “It is out of control… I have multiple reports of households that have 30 kids and one or two adult chaperones in them, far exceeding the capacity of the houses… We are a family-oriented resort community and that was not evident last week.” Beaumont described kids jumping out in front of moving cars to post the episode on TikTok.

Commissioner Bob White agreed: “It is weird that somehow Corolla became the new beach week place for graduating high schoolers… but it is an oddity that we saw this year what we’ve never seen before – the number of teenagers that were there raising Cain and jumping out in front of cars.”

In a similar vein, commissioner and Lieutenant Kevin McCord stated that last Wednesday and Thursday the police department made multiple sting operations related to underage drinking, resulting in 107 charges. These were underage drinkers, the businesses that sold alcohol to minors, as well as adults contributing to the delinquency of minors by buying alcohol for them. “Seventy people have court, just from those two nights,” McCord said.