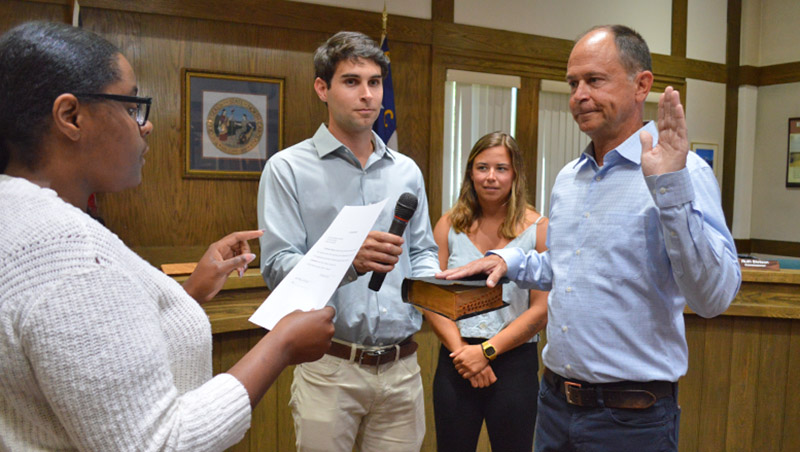 Tod Clissold, right, is sworn into office as a member of the Town of Manteo Board of Commissioners. The oath was administered by town clerk Jamie Whitley, left. Standing with Clissold are son George and daughter Caroline. Mary Helen Goodloe-Murphy photo

The Manteo Board of Commissioner approved two contracts for legal services.

Current Town Attorney Ben Gallop is starting his own law firm, Gallop Law Firm PLCC. He will continue as town attorney. The contract is effective July 6, 2022.

The commissioners also agreed to a contract with Hornthal, Riley, Ellis & Maland, L.L.P. with the same effective date. This law firm is limited to advising the town staff and commissioners on “personnel, real estate and other matters that may require particular expertise or manpower as determined and requested by the Town Manager and/or Town Attorney.”

The board had an extensive discussion on speed limits in the town.

Since the early 1970s, the posted speed limit in the Town of Manteo has been 20 miles per hour except for the U.S. 64 highway, which is 35 miles per hour.

However, to have a lower speed limit than 35 miles per hour, an agreement with NCDOT is required. No agreement exists.

“We do need agreements in place,” said Manteo Police Chief Vance Haskett, who cited inconsistencies in speed limits between the town and NCDOT.

Mayor Bobby Owens proposed setting the townwide speed limits at 25 miles per hour with no warning tickets issued. “I’ll probably be the first caught. I do speed,” said the mayor.

Town manager Melissa Dickerson was instructed to ask NCDOT to come up with a plan for the commissioners to review.

At the mid-month meeting for the Manteo Board of Commissioners, department managers report on the previous month’s work, in this case May.

Finance: Heather Doughtie, finance director, told the board that auditors with Thompson, Price, Scott and Adams are expected to complete an exit audit in the next few months. Documents have been sent and auditors were on site May 31 and June 1.

The town’s budget for FY 2022-23 has been adopted and the budget ordinance is posted online.

Public Works: In May, employees in public works attended KidsFest with a backhoe and gave away miniature roll carts and excavators. Around the town, employees removed grass from the bump outs along W. Sir Walter Raleigh St.; trimmed around speed limit sign on W. Fernando St. and watch for children sign on Ananias Dare St.; placed mulch in Collis playground; continued to remove trash and debris along the causeway. Alvin Sheppard and Robbie Norman attended the American Public Works Association Leadership and Management Conference.

Haskett responded to a question about dogs in Collins Park. Dogs must be on a leash or under voice command.

Community and Economic Development: Downtown market now runs from 9 a.m. to 1 p.m. Some 70 applications were received. A waiting list is now in place.

On June 14, a major water main break occurred. A six-inch cast iron pipe broke in half. The pipe was installed sometime in the 1950s. Josh O’Brien thinks the weight of traffic caused the break. It took the town less than three hours to make the repair. O’Brien saluted the team from town departments and NCDOT and Hatchell Concrete for making the quick repair possible.

Statistics from the department show that in May 2022, service location requests for both water and sewer lines numbered 34. Water meter re-readings numbered 21 and two leaks were repaired. On the wastewater system, two pump motors were repaired and one pump motor was replaced.

Waterfront Operations: At the Maritime Museum, sailboats were rigged for the summer; the sailing camp safety boat was serviced; and several planks replaced on floating docks. Summer camp started June 13. Volunteers turned in 98 hours in May.

At the town marina: 66 transient boards visited in May with revenue at $10,000. Average stay was two nights. Some 19 boats cancelled due to weather. For Memorial Day weekend, occupancy was 99% percent. Two new annual boats registered.

Planning: Melissa Dickerson reported that the planning board had two items on its agenda, including one regarding a special use permit for Marshes Light which SAGA asked to be pulled from the agenda. The board approved filling in a water hole on the back yard of a single family home on Barlowe Street. She reported “slow but good progress” on the Shallowbag Bay Pump Station.

The commissioners by resolution created a Mainstreet Advisory Board, to offer advice, provide feedback and make suggestions as the town enters this national program. The board decided on a 10-member board with five current members of the Mainstreet board and five people who can be nominated up until July 6, the next meeting of the commissioners. The resolution with those changes was adopted by a 4-0 vote as two members of the board were not present.