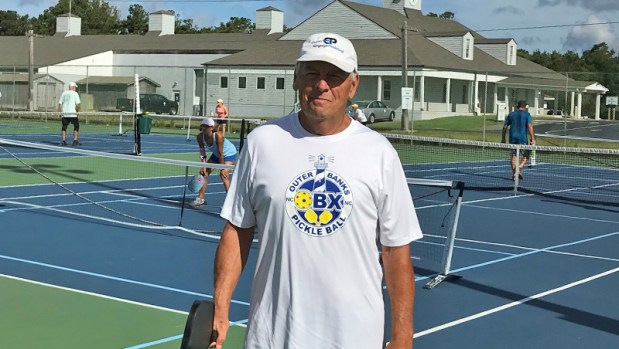 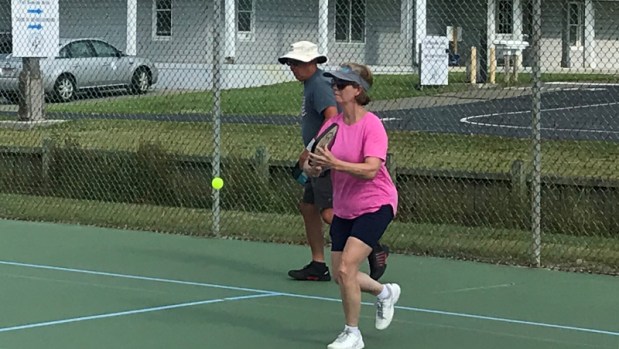 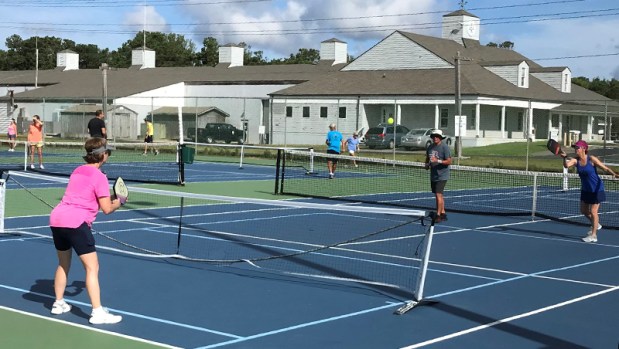 Pickleball players are waiting on the ball to be served. Judy Stiles photo 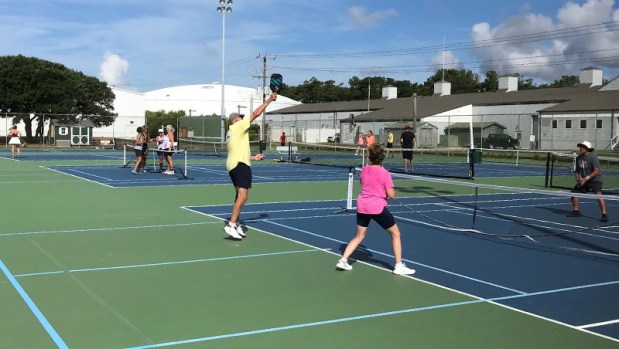 Pickleball is a both a physical and strategic game, players at the Dare County Recreation Department are ready and watching for the ball to be returned. Judy Stiles photo 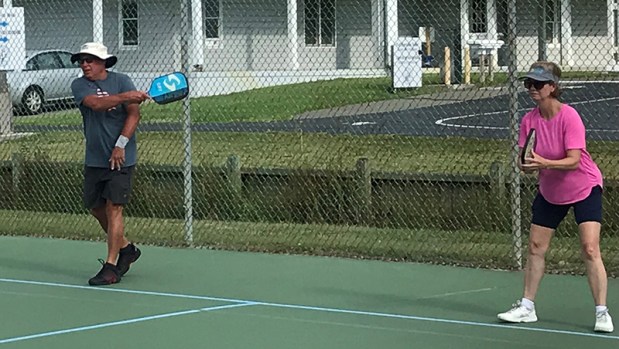 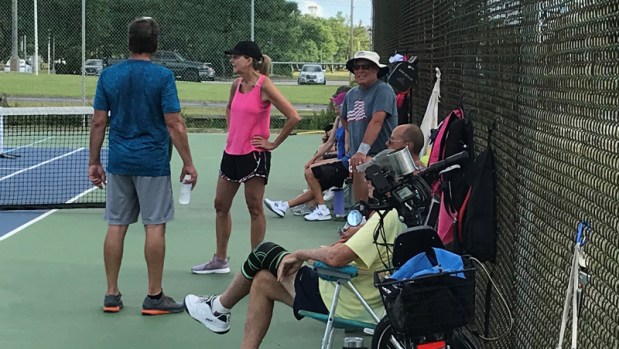 Pickleball players are waiting on the sidelines for their turn to play. Judy Stiles photo

Pickles are generally not a breakfast item, but pickleball, on the other hand, is served up most mornings at the Dare County Youth Center at Family Recreation Park in Kill Devil Hills. Rather than pickles, players need a paddle, wiffleball, net, playing surface and at least one other player to hit the court.

Games are played inside or outdoors on a badminton-sized court with a 34-inch-high net. The goal of the game, like tennis, ping-pong and badminton, is to hit the ball back and forth over the net in an effort to get the opposite player/team to not be able to return the ball. The ball is a wiffleball larger and lighter than a tennis ball. Games may be played as singles or doubles.

Dozens of players were at the outdoor games held at the Dare County Recreation Center on Friday morning, July 1. Multiple games took place on the court as other players stood on the sideline waiting for their turn to come up. As soon as one set of players finished their game, another set of four players took to the court.

According to a Sports and Fitness Industry Association press release, pickleball has been the fastest growing sport over the last two years, with participation seeing a nearly 40 percent growth.

There are an estimated five million players in the U.S. and adults over the age of 54 make up the largest group of players. However, younger players are participating more and the average age of players is 38 years old.

Garber described pickleball as addictive. “My wife introduced me to the game,” he said. “Once I played, I was hooked. It is a fun, social game that anyone can play.”

Garber explained that the game is easy to learn and said most beginner players will learn the rules and be on the court in 10 to 15 minutes. The ease of learning the game may be one of the things that draw players to the court; however, several people playing at the Dare County Recreation courts said it was the fun, fitness and friendliness of the group that kept them coming back.

During the COVID-19 pandemic when safe-distancing was necessary, pickleball provided opportunities for players to safe distance and socialize. All ages – seniors, adults and children – are able to play together.

Pickleball is a favorite leisure choice for many seniors because it helps them stay active and moving and the smaller court size lessens the physical impacts.

While new players are welcome to the Outer Banks pickleball group, there is worry there will be longer wait times as new players join. Several athletes on the sidelines mentioned that waiting to play was the hardest thing about playing.

Garber expressed concern that the number of players has outgrown the number of places to play in Dare County. Garber questioned why funds from the county’s occupancy tax does not fund the recreation department and, particularly, adult recreation programs such as pickleball.