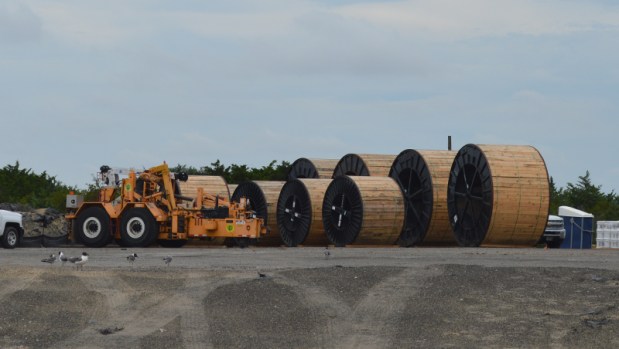 Huge coils of cable are ready for installation under the travel deck of the Rodanthe Bridge. New River Electric Corporation is the Cape Hatteras Electric Cooperative’s contractor for the cable pulling job. The first phase of the cooperative's project, installing hangers and conduit, is completed. Mary Helen Goodloe-Murphy photo 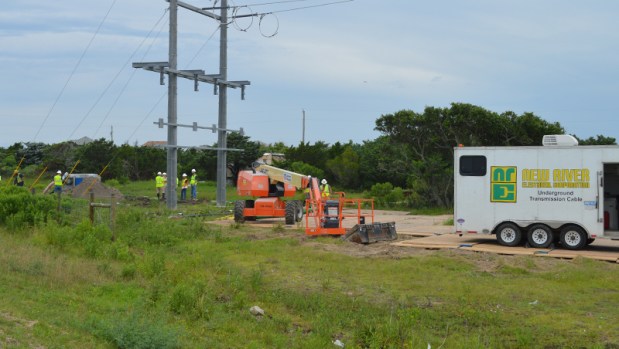 At the southern end of the not-yet-open Rodanthe Bridge, a kick-off meeting is underway for the next step for Cape Hatteras Electric Cooperative’s installation of cable to carry electric power to Hatteras and Ocracoke islands. The first of four cable pulls starts the week of July 18. The project will pull cables for three-phase power and a spare from the southern riser to the first of four splice boxes. Mary Helen Goodloe-Murphy photo

The opening of the Rodanthe Bridge remains delayed.

The paint truck broke down again.

On Monday, July 11, 2022, paint contractor T.M.I. showed up with the paint truck. Around 4 p.m., preparations were underway to run a test stripe. The paint was warmed up and ready for the test. Then, the truck would not go into reverse or drive. A minor leak was also noticed in the paint unit.

On Tuesday morning, a mechanic from Seto’s came to look at the truck, which was towed to Seto’s. The truck with an electrical problem was ultimately towed to Raleigh for repair.

Under the contract with prime contractor and NCDOT, T.M.I. is provided an opportunity to cure the problem, which is painting not up to standards.

Only eight or nine road painting contractors are pre-qualified with NCDOT. But, reported NCDOT district resident engineer Pablo Hernandez, only half of those contractors have equipment to do long-line painting required for painting the lines on the bridge.

T.M.I has removed the sub-standard paint on the bridge, making it ready to paint.

The painting delay has facilitated the work of attaching electric cable to the bridge.

On Thursday, July 14, 2022, an on-site meeting was underway at the southern end of the not-yet-open bridge. The meeting was in preparation to begin pulling electric cable. The project will start at the riser, which is already in place, and progress to the first of four splice boxes. Then, the installers will move to the north end to put in that segment. Installing the last two segments will require one-lane traffic closures.