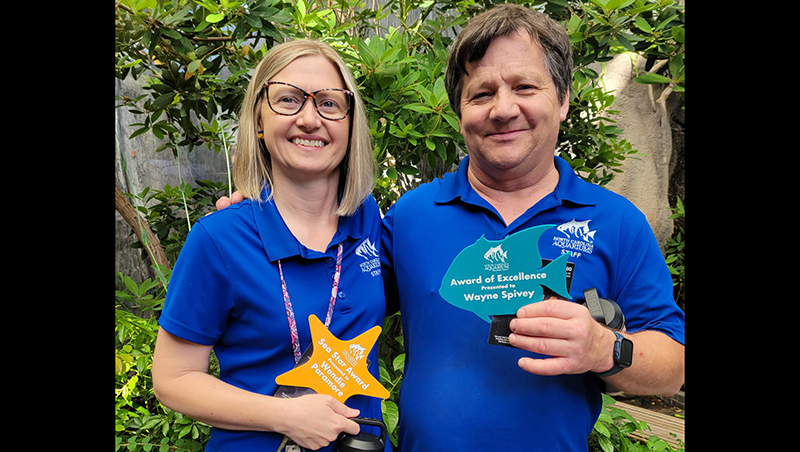 Each year, the North Carolina Aquarium on Roanoke Island recognizes two employees for outstanding customer service and excellence in their overall work.

The 2021 Sea Star Award for outstanding customer service was awarded this year to aquarium registrar Wendie Paramore and the 2021 Award of Excellence was presented to plumber II Wayne Spivey. They were presented with these honors at the aquarium’s June all-staff meeting.

“Staff are nominated for these awards by their co-workers and all nominations were reviewed and recipients determined by members of the North Carolina Aquarium Advisory Committee, an appointed committee of local stakeholders who provide insight and advise the Aquarium from a regional perspective,” stated a press release from the aquarium.

Paramore started with the aquarium in June 2005 in the education department and, while her position later transitioned into visitor services, she has been the primary public contact for teachers, groups and schools, providing excellent customer service for 17 years. The release noted that she is also applauded for her consistent help with community service blood drives at the aquarium, helping to ensure successful events for staff and visitors and participating in roadside and beach cleanups. “Her friendly warm attitude goes above and beyond, and she is a team player in pushing forward the Aquarium’s mission and vision,” stated the announcement.

Spivey joined the aquarium in January 2000, when the facility opened with its first large renovation. “Wayne’s excellent skills at plumbing have virtually left no piping untouched throughout the Aquarium,” stated the release. “He has installed, as well as repaired, uncountable life support and water supply systems in his 22-plus years of service. But Wayne’s skills are far more than that of plumbing – he has served the Operations department as a general utility worker during his tenure as well, going above and beyond to assist in daily duties, as well as installing and repairing any number of other facility systems – and he does it with a smile and sense of humor! His work truly exemplifies excellence.”