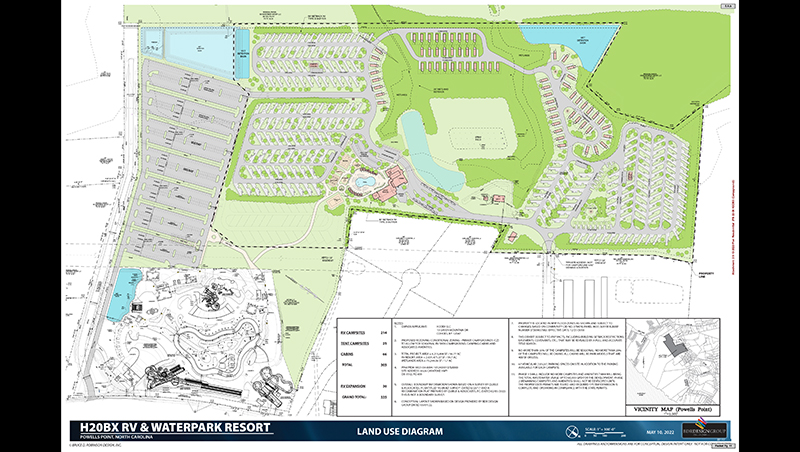 H2OBX Waterpark owner Ken Ellis requested a zoning change for his Powells Point property that would potentially allow him to add a 335-site campground plus amenities.

Ellis presented a plan for 335 campsites – 224 RV sites, 25 tent sites and 66 cabin sites – and amenities like a swimming pool, playground, courts for volleyball, pickleball, corn hole and shuffleboard, as well as a pavilion, golf cart rentals and a dog park.

The campground will sit north of the waterpark and would comprise the majority of the almost 100-acre property.

“Obviously we’re very keen on lower Currituck. We’ve invested down there and we have a nice recreational property. We do think this will be a good compliment for the area,” Ellis said at the July 18 commissioners meeting.

Several neighbors voiced concerns during the public hearing. Diane Siever said the waterpark has been a “hassle” and “if a campground is there it’s only going to be worse.”

Many people spoke up about the need to install a traffic light at the intersection, which currently is serviced only by a deceleration lane. “I’m telling you, if they don’t do something with a light somebody’s gonna die there. It’s a death trap,” neighbor Jerry Siever said.

Gary Dunstan, who lives in Kitty Hawk but owns property adjacent to the waterpark, expressed support for the campground, with a couple of reservations. Dunstan said a campground is great for the county because it has no impact to the school district and will add revenue. “I can’t think of anything better for this property,” he added.

However, Dunstan did have issue with the lack of advance signage. For example, Busch Gardens has signs that alert visitors of the entrance 500 feet ahead. He also spoke up about the proposed entrances, which he said added confusion.

Part of the cause for confusion comes from the new legislation regarding campgrounds. Currituck only recently approved campgrounds as an allowable use, with the stipulation that they must be located right on Hwy 158. Therefore, the plan is for the campground to use the same entrance as the waterpark, even though it’s a tight turn for RVs or trailers.

“If you’ve got a big RV that’s many times as big as buses and a lot of times pulling Jeeps or trucks behind them, they can’t make that hairpin turn and neither can fire vehicles,” Dunstan said.

Many speakers expressed that a more reasonable entrance for the campground is through Ballast Rock Drive, just north of the waterpark’s entrance. However, the Unified Development Ordinance (UDO) prohibits a campground entrance off a side street. Some spoke up about adding a variance to the UDO to allow easier access.

Commissioner Paul Beaumont noted the conflict. “To address the comment about a variance – if the first campground that comes before us … and we’re already looking at a variance on it, that means we didn’t do a real good job on the text amendment itself.”

Regarding the installation of a traffic signal, commissioners acknowledged the value of one at the intersection, but stated that it is the jurisdiction of the NC Department of Transportation.

“Without a traffic light, I’m really concerned,” Beaumont added. “I hope we don’t have to wait for a series of fatalities to get DOT to get moving.”

Ellis said he would be willing to communicate with NCDOT to encourage an installation of a light.

Monday’s zoning approval was step one. Ellis will be required to continue through the remainder of the process, including procuring necessary permits and receiving site plan approval from commissioners before the campground plans can move ahead.