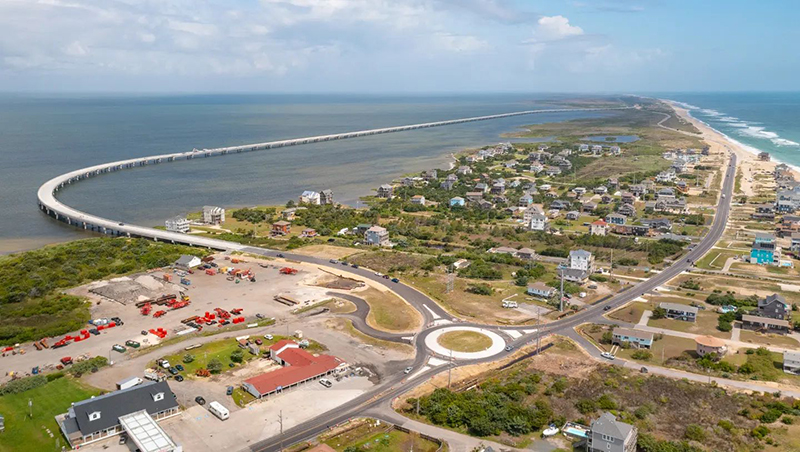 The Rodanthe Bridge opened to traffic on July 28. Courtesy NCDOT

The North Carolina Department of Transportation officially opened the Rodanthe Bridge to traffic on Thursday, July 28. The first southbound vehicles began moving across the structure at 11:40 a.m. and northbound lanes were opened at 12:20 p.m.

The new 2.4-mile bridge extends over Pamlico Sound between the southern end of the Pea Island National Wildlife Refuge and the village of Rodanthe, bypassing a section of N.C. 12 that is vulnerable to ocean overwash. Construction of the $155 million project began in July 2018.

Intermittent daytime lane closures on the bridge will still be necessary in the coming weeks as Cape Hatteras Electric Cooperative continues to connect electric, phone and internet transmission lines onto the new structure.

After the cables are attached, pavement and sandbags on the bypassed section of N.C. 12 will be removed, allowing it to return to its natural state. The road removal project is expected to be complete by the end of November.

The Rodanthe Bridge is the third new bridge to be completed on N.C. 12 in the last five years. The Captain Richard Etheridge Bridge over New Inlet was completed in 2017 and the Marc Basnight Bridge over Oregon Inlet opened in 2019.