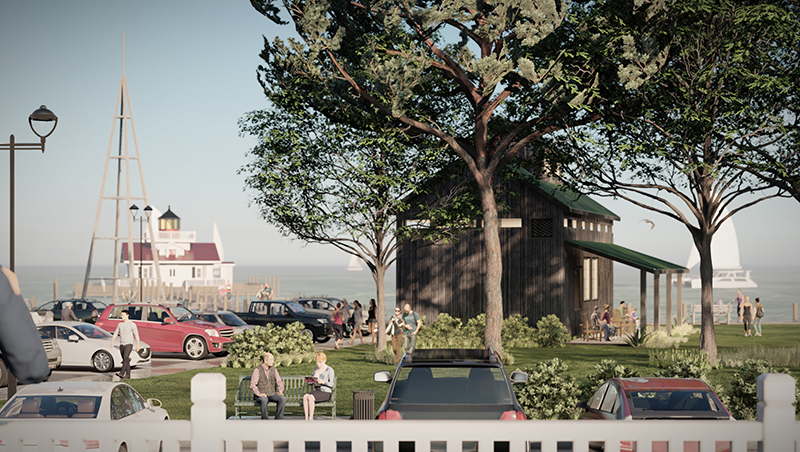 A rendering of the exterior of the Waterfront Lift Station Replacement under construction at 100 Queen Elizabeth Avenue in Manteo. The existing lift station was originally built in the early 1940s with the last recorded update in 1992, states the Town on Manteo’s description of the project. Town of Manteo photo

“I’m really proud of where this town is going . . . It’s clean thanks to our staff. We heard from the wastewater people,” said Mayor Bobby Owens the end of the July 20, 2022, Manteo Board of Commissioners meeting.

The mayor continued, “I would like to remind you that our system is about 50 to 60 years old. We’re going to have to start looking at the future to improvements to our whole system. It’s going to be a little bit expensive. We can’t keep running from it.”

A new component of that system is under construction at the Manteo waterfront. The new lift station is replacing one built in the 1940s.

During monthly reports, Josh O’Brien, who heads up the town’s water and sewer department, reported on repairing both water and sewer lines on John Borden Street. The department’s contractor hauled 250,000 gallons of sludge from the wastewater treatment facility. Hauling sludge is done twice a year.

On the waterfront, two events were planned: 20th Annual Summer One-Design Regatta and on Aug. 13, the Ninth Annual Kids Fishing Tournament. Visiting the Manteo Marina in June were 71 transient boats with an average night stay of four days.

Manteo’s police officers in June responded to 1,980 calls and 10 accidents, made 11 arrests, launched 22 investigations of which 16 are closed, issued 30 citations, 14 ordinance violations and one warning ticket.

The finance director Heather Doughtie told the board active interviewing was going forward for the vacant accounting technician position. She announced a finance software upgrade is estimated to go live January 2023.

Public works crews were heavily involved in setting up and cleaning up the three-day Dare Days event at the beginning of June. General operations during the month included trimming and removing limbs and vegetation along the ditch between The Christmas Shop and Darrell’s; edging and trimming along sidewalks; installing wall protectors under hand dryers; installing new picnic tables; removing excess dirt from Town Common bathhouse; and continuing to remove trash and debris along the causeway.

Information technology director Carl Woody reminded the commissioners and staff that “cybersecurity is everyone’s responsibility.” An upgrade to the cemetery software will provide a public portal for a burial search and access to walking directions to a grave.

Town planner Matt Farmer told the board that CAMA had issued a stop work order at 29 Spinnaker Drive on June 21 for violation of a permit.

Commissioner Tod Clissold commented that signs were out of control and needed to be addressed again.

The board increased the hiring rate and maximum range by the 3.5% cost of living adjustment that was approved by the board on June 1, 2022 effective with the start of the fiscal year 2022-23 on July 1, 2022.

In another step, the board updated classification titles to coincide with HR titles within the system in order to make a seamless integration into the new financial software.