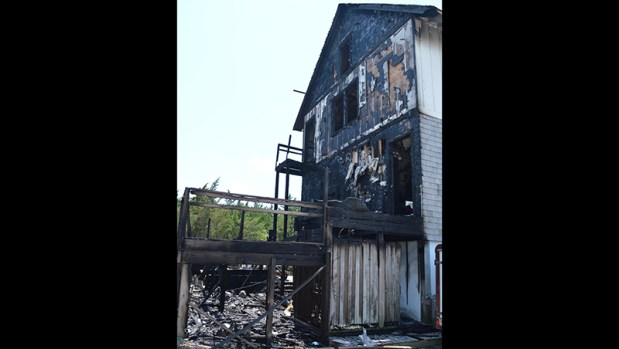 On Aug. 3, 2022, a structure fire at Duck Village Outfitters on NC 12 in Salvo destroyed the back of the building. The interior of the building is smoke and water damaged. No injuries were sustained by volunteer firefighters from Chicamacomico Banks and Avon volunteer fire departments. Residents were not injured, but have lost everything. A GoFundMe account has been set up by Emily Masters. Mary Helen Goodloe-Murphy photo 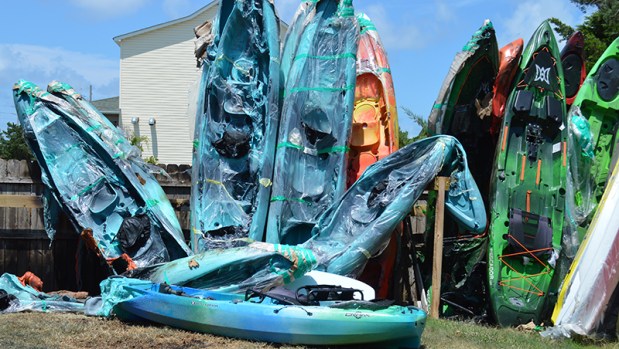 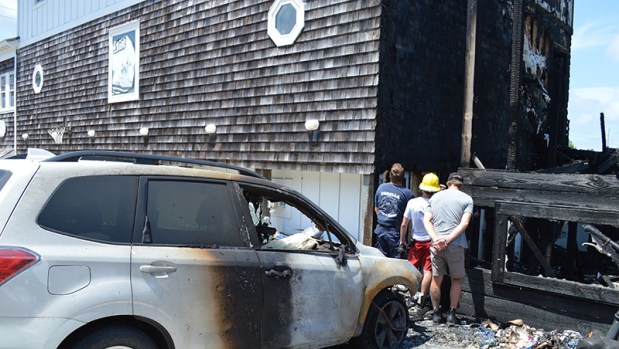 Dare County Fire Marshal Steve Kovacs, left, along with volunteer firefighters Esban and Ben are investigating the cause of the fire at Duck Village Outfitters in Salvo on Aug. 3, 2022. Mary Helen Goodloe-Murphy photo

When the first ladder truck arrived, firefighters encountered heavy fire at the back of the building at 26889 NC 12. The fire extended into the interior of the building.

Firefighters searched the building but found no people. A cat was later found alive and uninjured. Some 15 firefighters from both Chicamacomico stations responded to the fire call. No firefighter injuries were reported.

At the time of the fire, the temperature was 84 degrees with a southwest wind at 28 miles per hour. That wind sent embers flying into stored kayaks.

The volunteer firefighters left the scene around 1 a.m.

The four people who lived at the store and two employees were not harmed. However, “the residents have lost everything they had, and have nowhere to live, and the employees who have families to support need help,” states a GoFundMe account.

The account set up by Emily Masters is titled “Please help! Locals lost everything in fire.”

A donation box has also been placed in the Rodanthe-Waves-Salvo Post Office.

Duck Village Outfitters is owned by Robert E. Hovey and Tanya Leigh Hovey. The interior of the building sustained smoke and water damage.

The cause of the fire was not available as of Friday morning; the investigation is ongoing.