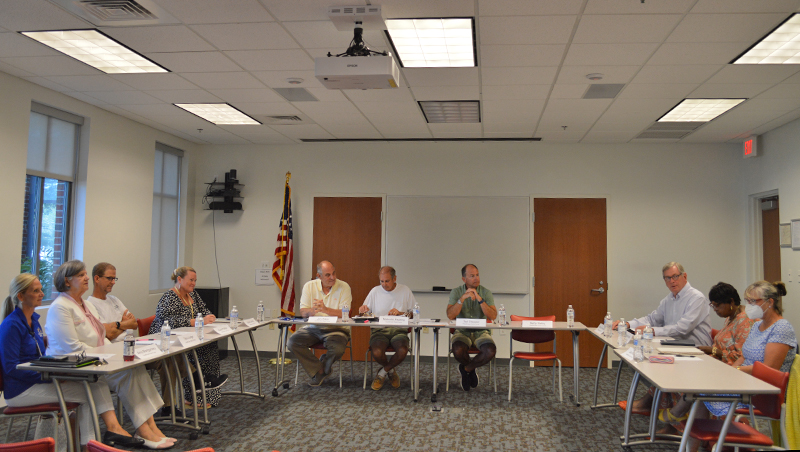 Healthcare Task Force members appointed by the Board of Commissioners for the Town of Manteo gather for their first meeting on Aug. 2, 2022. Shown, from left, around the tables are Amy Montgomery, senior administrator of operations at The Outer Banks Hospital; Tess Judge, chairwoman of the Board of Directors of The Outer Banks Hospital; Kevin Phillips, pharmacist from Island Pharmacy; Sheila Davies, Dare County director of Health and Human Services; Jim Tobin, Dare County commissioner; Malcolm Fearing, task force chairman; Tod Clissold, Manteo commissioner; Randy Fenninger, retired health attorney and public policy advocate; Beulah Ashby, retired Dare County employee and former member of The Outer Banks Hospital Board of Directors; and Lisa Wheless, counselor, liaison with Dare County Schools. Betty Selby, vice mayor of Manteo’s Board of Commissioners, was attending a conference on the day of the meeting. Mary Helen Goodloe-Murphy photo

“This is a good group of people,” said Malcolm Fearing at the first meeting of the Healthcare Task Force appointed by the Board of Commissioners of the Town of Manteo.

The group is diverse with representatives from The Outer Banks Hospital, a pharmacy, three elected officials, a public health director and a liaison with the school system.

The members introduced themselves and commented on concerns at the same time.

Tess Judge, who chairs the hospital’s Board of Directors, voiced concern to provide more health care for everyone.

Amy Montgomery, senior administrator of operations for the hospital, said she had been working for over a year on recruiting with access to health care a priority.

Kevin Phillips, pharmacist, said the transition had been uneven. Helping people was very difficult. Even with Teledoc, prescriptions can only be filled for 30 days.

Sheila Davies, Dare County’s director of Health and Human Services, said access to health care has been in the top five needs in Dare County Community Health Needs Assessment. She will make a presentation about that assessment at the next task force meeting, set for Sept. 13, 2022 at 9 a.m.

Dare County commissioner Jim Tobin started his introduction with by saying he was “discarded from the system.” He said he had lost trust in the system and that a letter of apology should be sent.

“I’m going to Duke Family Medicine.” He said it’s not a corporation. He had a first appointment. He spent 45 minutes with a doctor and 15 to 20 minutes with a nurse.

Montgomery responded that she appreciated the comments. She claimed that “primary care doesn’t make money” nor, she added, does urgent care.

Manteo commissioner Tod Clissold thanked the hospital’s representative for participating but said he was “shocked by the letter.”

People who visit love the town. “One of the amenities needs to be health care,” said Clissold. “I think we can come up with a solution.”

Restoring trust is critical, said Randy Fenninger. “Yes, it’s complicated. Yes, it can be improved.” He called for a list of what’s available now, something that Davies volunteered to put together for the Sept. 13 meeting.

Beulah Ashby, a former member of the hospital’s Board of Directors, and Lisa Wheless, a counselor in Dare County Schools, both called for addressing mental health issues.

Ashby remembers when no doctor was available in Dare County. She was delivered by a mid-wife. She also said, “This is a Dare County issue.”

The location of the next meeting for the task force on Sept. 13 is to be determined.

For the public to connect with the Healthcare Task Force, the Town of Manteo has set up an email account. Send questions and comments to healthcare@manteonc.gov.