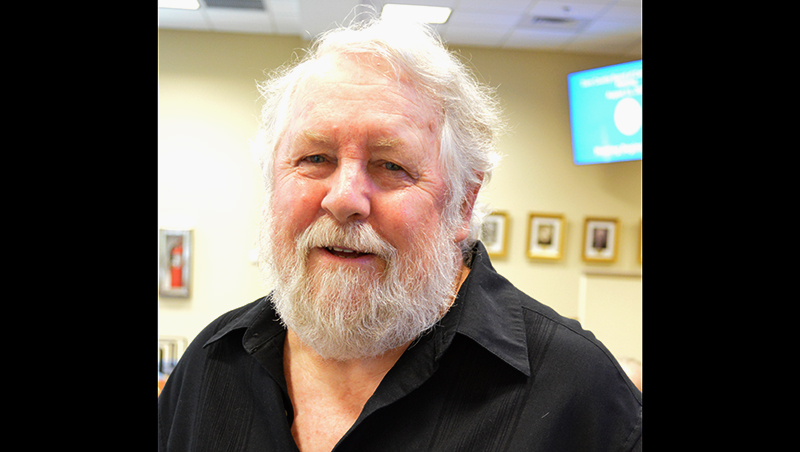 Allen Poole, a long-time pathway advocate, spoke to the Dare County Board of Commissioners about creating a pathway along Airport Road on Roanoke Island. The commissioners identified possible sources of funding. M.H. Goodloe-Murphy photo

At a special meeting on Thursday, Aug. 11, 2022, Dare County Board of Commissioners charted a way forward for finding funding to do something about pedestrians and bicyclists on Airport Road on Roanoke Island.

The historic road is concrete with very narrow travel lanes and no paved shoulder. The white fog line is at the edge of the pavement.

The special meeting was called to talk about installing a pathway for bicyclists and pedestrians.

Leading the charge was Allen Poole, a long-time pathway advocate.

He presented a May 20, 2019 Board of Commissioners resolution advocating multi-use pathways adjacent to Airport Road and adjacent to NC Highway 345 to Wanchese. The resolution was sent to the Albemarle Regional Planning Organization.

Poole also referenced the 2015 Dare County Comprehensive Transportation Plan, prepared by NCDOT. That plan recommends a sidewalk on both sides of Airport Road. It also points out that the road itself needs to be widened.

“That’s what I’m here for is to move this whole idea along,” said Poole.

Larry Warner, manager of the North Carolina Aquarium on Roanoke Island, noted that four of his staff bicycle to work and that numerous special events occur at the Old Swimming Hole that increases traffic along Airport Road.

Mark McKay, a retired sheriff’s deputy, said he was one of the runners and walkers along Airport Road. “It’s definitely dangerous.”

NCDOT’s division planner Gretchen Byrum was asked about available funding. She said enhancement funds were available, but that funding category does not now exist.

“There are no funding available locally,” she said.

She will check about new feasibility study funding and will ask the traffic engineer to investigate signage.

Byrum said to fix shoulders and drainage would be a “major undertaking.” The road does not have established drainage and has no culverts. Byrum did confirm that NCDOT has a 60-foot right-of-way.

Byrum responded that type of project would have major costs and major impacts and would be funded through the State Transportation Improvement Program. She reported that in 2015, NCDOT launched a secondary road improvement program. Division 1 spent $135,000 repairing concrete on Airport Road. That program is now only for unimproved roads.

“We’re going to be hard-pressed to get the numbers for STIP,” said board Chairman Robert L. Woodard. “We’ve got to find another way.”

He acknowledged that property owners might be initially against the program. His experience is that once a pathway is in place, people like it.

“We’ve got to find a way to make this happen … sooner rather than later,” said Woodard.

Byrum suggested seeking out the legislators as well as NCDOT’s bike and pedestrian division. She confirmed what Woodard said, that it’s going to be tough to get funding through the State Transportation Improvement Program.

Woodard then asked would it be possible for the developer to participate.

County manager Robert L. Outten responded the developer could provide the funding and Dare County would work with NCDOT to make it happen.

Other possible funding sources are the Dare County Tourism Board and a state Parks and Recreation Trust Fund Grant.

Byrum said a project would need to address drainage concerns.

A northend stormwater project, created by Dare County, NCDOT and property owners, was projected to cost $413,000. The project was submitted for funding but failed to garner enough points. The project involves a portion of Airport Road.

Dare County has allocated $2 million to address stormwater in its fiscal year 2023 budget.

The Airport Road project involves removing a collapsed culvert and installing new culvert with stormwater piped to the Croatan Sound.

Commissioner Ervin Bateman moved to spend $400,000 and “be done with it.” The board authorized the county manager to execute a budget amendment.

The first amendment set up a budget for the Woda Cooper housing project with $9 million transferred from appropriated fund balance to the Community Housing Fund. The second amendment established a budget for the Coastal Affordable Housing Project of $35 million of state funds allocated in the fiscal year 2023 budget, Section 24.1.

At the end of the meeting, Outten said he was asked if the county would like to purchase the Pioneer Theatre. He said he was obligated to come to the board with the question. No commissioner made a motion. Outten said that indicated the commissioners had no interest in acquiring the theater in downtown Manteo.

The family-owned and -operated theater has been in the same location since 1937. The theater offers one showing nightly starting at 7 p.m. Tickets are $7 each and concessions are $2 each.