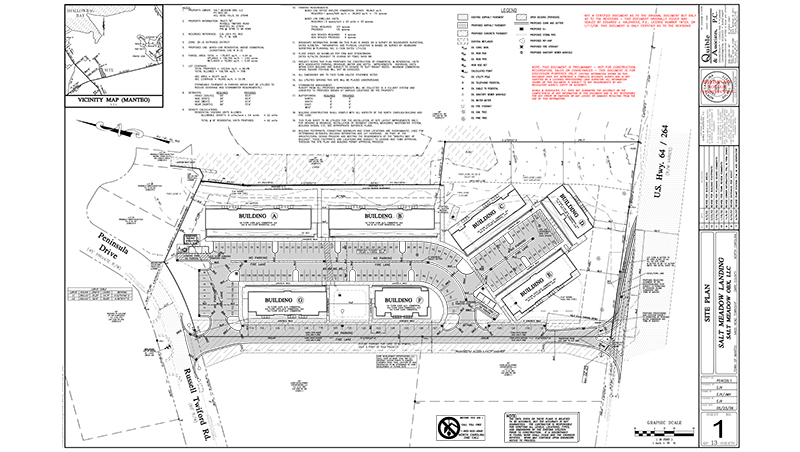 Manteo commissioners have postponed action on a mixed-use proposal for four acres of land close to Midway intersection.

At the conclusion of a quasi-judicial hearing and on a unanimous vote, the commissioners delayed action for a month on the proposal from Salt Meadow Landing OBX LLC.

The town’s Planning Board met July 12, 2022 and recommended approval of the special use application with the following conditions:

– Obtain all necessary approvals from Dare County. In the site plan submitted June 7, 2022, town staff noted that a roadway for the Salt Meadow development was in adjacent property owned by Dare Development in unincorporated Dare County.

– Provide a letter to the town from Dare Development acknowledging the roadway will count against its lot coverage and other zoning considerations. Dickerson said that the town had received a letter sent by Salt Meadow to Dare Development spelling out the consequences of the roadway use. She was satisfied with that.

– Complete a traffic impact study and receive approval from NCDOT. On March 10, 2022, David B. Otts with the state’s transportation agency wrote to Dickerson: “As the access point to the former is only 250’ from the intersection of two primary routes, a traffic impact study will be required to ensure this additional volume can safely be accommodated. It should be noted that we regularly receive comments from concerned citizens living along Peninsula Drive regarding their perceived inability to safely exit Russell Twiford Road.”

As of Aug. 3, the traffic study had not been completed.

– Make all necessary changes and recommendations made by the Preservation and Architectural Review Committee.

In addition to the recommendations from the Planning Board, staff review noted that stormwater and CAMA permits need to be obtained from the State of North Carolina.

After Dickerson completed the staff comments, Gupta, representing the applicant, replied. “We believe the application meets current rules and also complies with zoning,” he said.

The land is zoned B-3 Entrance District. About this district, the zoning code states: “The B-3 zone is established to allow traditional commercial activity together with year around residential opportunities in the areas that are the entranceways to the town.”

As to traffic, Gupta said the traffic study would be done as part of the next steps. He pointed out that the site plan has a cut through from U.S. 64 to Russell Twiford Road.

After the presentations, commissioners started discussion.

Commissioner Sherry Wickstrom wanted clarification about businesses. The zone’s statement of intent refers to commercial activity. Under the special use permit section, permitted uses are mixed-use residential above retail and retail with a list of 19 possible retail uses. Under the special use permit, 16 other uses are permitted. The ordinance does not have a definition of “commercial.”

Said Wickstrom, “I just want to make sure there is clarity about what is possible …”

Vice Mayor Betty Shelby said “I need something more defined. I want to know what can and can’t go there.”

Commissioner Tod Clissold pointed to Buildings F and G, which are marked as three floors of commercial, with Building G at 11,028 square feet and Building F at 7,800 square feet.

“There’s a lot in here that we need to button up before we can move forward,” said Clissold.

About Midway intersection, Clissold said “it’s a bad situation. It’s an absolute mess.” He wants a traffic study done by a third party.

To Gupta, Clissold said “I think we can work with you. A lot of items need to be addressed.”

Gupta pushed for approval of the site plan. “All of this will come back.”

In response to a question from Clissold about the type of housing, Gupta replied that he has shifted to a “higher end development.”

Mayor Bobby Owens said, “we’ve got to make a decision.”

Gupta said, “I’m not in a race. We’re going to have to go through the process. I just want to have a clear road.”

Owens responded, that the project was a “long way from getting something from NCDOT.”

Commissioner Ruth Stetson moved to delay action until the board’s September 7 meeting. Wickstrom seconded the motion, which was unanimously adopted.

Owens said, “one way or the other we have to make a decision.”