One step at a time: Veterans hike the Mountains-to-Sea Trail 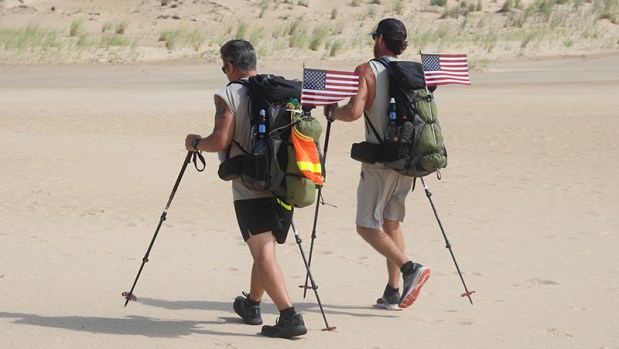 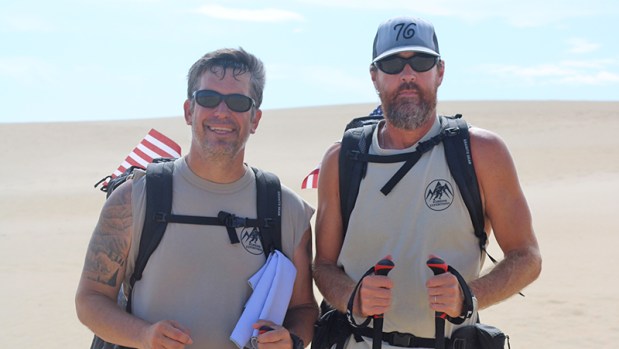 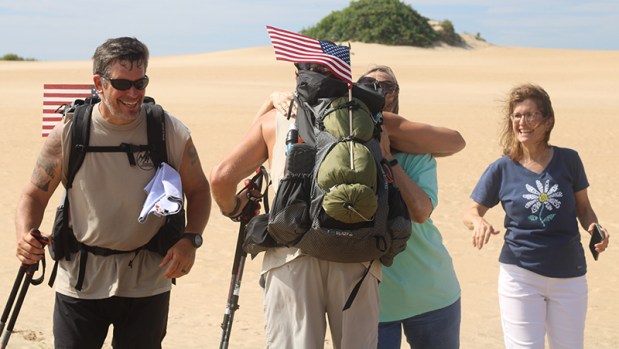 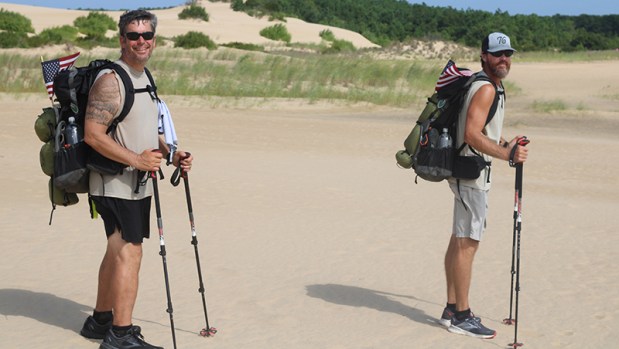 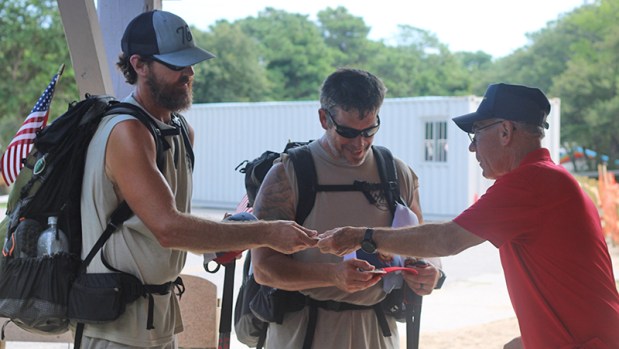 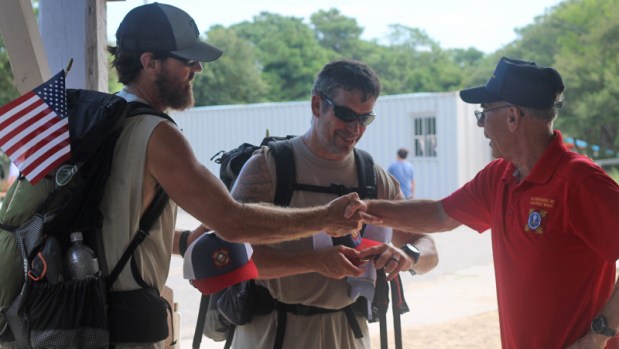 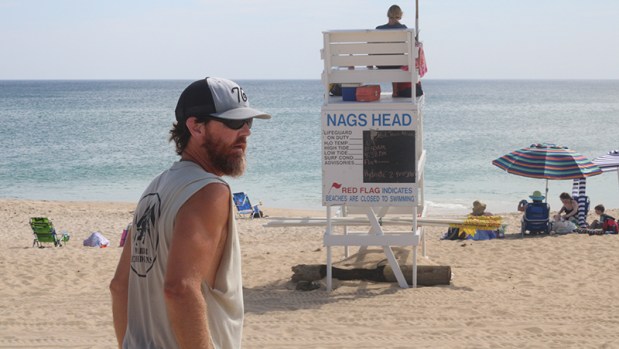 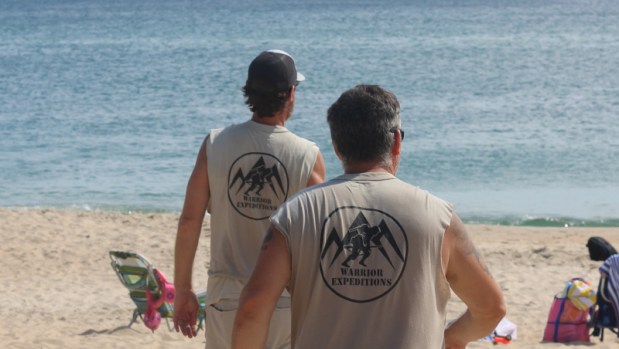 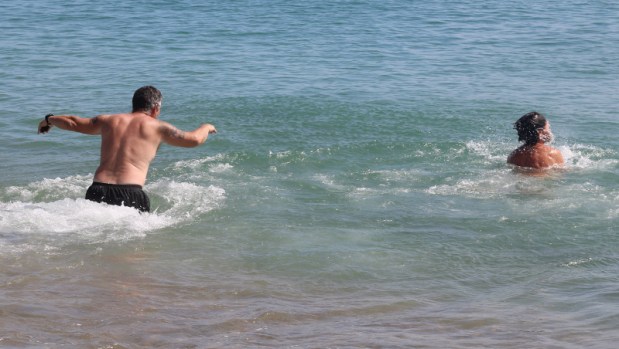 Stephen Woofter and JB take a ceremonial dip in the ocean after completing the Mountains-to-Sea Trail. Summer Stevens photo 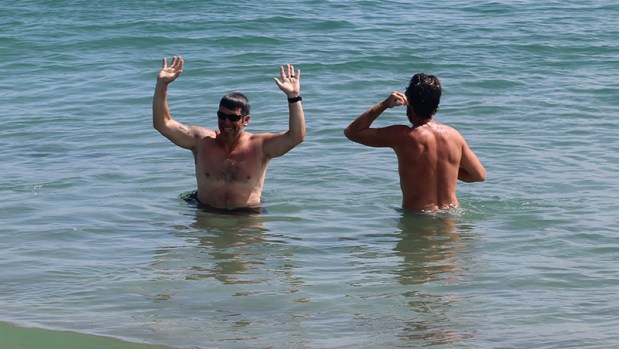 Stephen Woofter and JB take a ceremonial dip in the ocean after completing the Mountains-to-Sea Trail. Summer Stevens photo

Stephen Woofter and JB were strangers when they set out from Clingmans Dome, NC on May 25 to walk 1200 miles through the state. On August 1, they finished their adventure on the top of Jockey’s Ridge as friends, looking out at Atlantic Ocean and looking back at 10 weeks of reflection and life change.

Woofter and JB were selected to complete the Mountains-to-Sea Trail (MST) by Warrior Expeditions, a nonprofit outdoor therapy program that helps veterans process their wartime experiences through long-distance adventures.

Woofter served in the United States Army for 11 years and then reenlisted in the Air Force Reserves. While in the Air Force, he was deployed with the Army to Afghanistan and Iraq. He served several units including the 82nd Airborne at Fort Bragg. This October, after 34 years, he will retire from the military and resume life as a civilian.

JB served as a combat engineer in the Army from 1996-2005 and saw deployments to Iraq and Afghanistan.

Warrior Expeditions selects men and women to participate in outdoor adventures – hiking, paddling and cycling – and supplies all of the gear and training necessary. The organization was founded by Sean Gobin who, after returning from wars in Afghanistan and Iraq, found personal restoration during a through-hike of the Appalachian Trail in 2012.

“Historically, military units could spend months marching home from war. During this journey, they would process and come to terms with their wartime experiences. But in today’s age of modern transportation military personnel can find themselves home within a few days of serving in a combat zone,” explains the organization’s website (warriorexpeditions.org).

Warrior Expeditions seeks to offer that transition time – hours and days and weeks and sometimes months of quiet moments, solitude, nature and beauty – to process their experiences of war.

With about 10 to 30% of veterans suffering from post-traumatic stress disorder (PTSD), there is a great need for the many men and women who have attended to the security of our nation for many years to finally attend to their own mental health.

“We’ve used this word a lot – this is an opportunity. It’s for a group, but it’s also very individualized. You challenge yourself mentally and physically and you get to figure some things out,” JB said.

“There is therapy in time,” Woofter said. His voice breaks up as he reflects on the journey. His reasons for making the trip are hard to express, as they are for so many other veterans. “I know one night I’ll be laying there in bed and I’ll come up with all the rights words.”

Life on the Trail

The men rose early on the trail, to catch the sunrise as much as to beat the heat. They slept in their own small tents and cooked their meals over a tiny Jetboil stove. They packed up all their belongings every morning and started out, covering an average of 18 miles a day, and some days reaching 22-24 miles.

“You have to play the weather,” JB explained. “You can throw your stuff together and be ready to move before the sun comes up. I wouldn’t say any day was the same by any stretch. Am I going to boil water for coffee and oatmeal or just get going and stop a few hours down the road?”

They filled up their water bottles whenever clean water was available, at times resorting to their water purifiers when drinking from streams or unknown sources. Woofter recalls using his purifier on a mud puddle once during the trip. Food became monotonous pretty quickly. The men ate dry camp food, which is consumed by just adding water. “We ate a lot of packaged tuna and chicken. I don’t want any packaged tuna for a long time,” Woofter laughed.

The 1200-mile Mountains-to-Sea Trail is broken up into 18 segments, beginning just over the Tennessee border in Great Smoky Mountains of North Carolina. The trail dips south before heading north to Asheville, then snakes its way almost to the Virginia border before zigzagging toward the outskirts of Greensboro. The trail follows a path toward Raleigh, staying just north of all the major cities, and then the hikers get a break from foot travel and paddle 169 miles along the Neuse River past New Bern. The last several segments of the trail resume the hike for the home stretch north along the coast on NC-12 and up to Jockey’s Ridge State Park.

Along the route they passed wild animals, stepped over snakes and gazed at bald eagles soaring above them. The MST covers some of North Carolina’s most stunning scenery and varied topography. For Woofter, there were some standouts.

“We camped up on a meadow off the Blue Ridge Parkway. I think it was Doughton Park, maybe a federal park. It was gorgeous. The sunset and the sunrise there was awesome, up in the northern mountains,” he recalled.

“In the center [of the state], it gets easy – Hanging Rock State Park, Pilot Mountain State Park. You can see for so far, the land is getting flatter. The Falls Lake area was beautiful … it was like we were walking on carpet,” he added.

Though their surroundings were a delight to their eyes, their bodies took a toll. Woofter said, “A lot of sore feet and sore backs, every day. The director of Warrior Expeditions said it would be about two weeks [to adjust]. We didn’t find that at all. We found we were always sore, including this morning [after completing the hike] as we were hobbling around. Maybe when you’re 25. When you’re 50 and 55, it just never goes away.”

Warrior Expeditions selects a group of hikers to travel together for their journey. There aren’t any rules – you don’t have to stick together or eat together or camp together – but companionship is offered for those who want to spend time with other veterans who understand their experiences like no one else can.

JB and Woofter started their trip with two other men. In those early days, Woofter hiked alone much of the time. The two other men dropped out before the group left the mountains.

“[JB] and I hadn’t talked much before then. When the other people quit he and I just kind of bonded and we were together the rest of the way. We’d go hours without talking and sometimes we’d be separated by a distance and that was ok. But we always camped in the same place. The VFW in Hillsboro asked us if we got along and it cracked us up because we’d never thought about before,” Woofter recalled.

The Veterans of Foreign Wars (VFW) throughout North Carolina supports men and women hiking with Warrior Expeditions. Shortly after beginning the hike, the Cherokee VFW made a big dinner for the hikers, and that was just the beginning of the support from the VFW and from members of the community or “trail angels” who seek to bless and encourage through hikers.

“The beauty of mankind was awesome,” Woofter said. “Folks that don’t know you take you into their home, make you a big dinner, allow you to wash clothes, sleep in the AC. It was amazing. Amazing that these folks do that.”

He told a story of an older man in a rough community who welcomed them to his trailer and brought out cold Pepsis, Moon Pies and candy bars and invited them to rest for a few minutes in the shade. “He told us how he’d been a farmer all of his life. He knew we were hot and he wanted us to have something. I know he didn’t have much but he gave us the best he had.” It reminded Woofter of his deployments, visiting villages and being offered very sweet tea by the residents: “They were super dirt poor, but here were these people willing to give up a prime commodity to make us feel at home.”

Being shown simple kindness can change a person. The hikers were told they would come back with a new appreciation of humanity, and they did. “We had a couple take us into their house, and feed us, and they said ‘We’re going to our son’s house for Father’s Day. Do you want to come?’ The beauty of people was awesome. It was incredible.”

In Nags Head, the generosity continued: a member of the VFW Post 10950 coordinated with Interfaith Community Outreach to offer JB and Woofter a complimentary rental house in Nags Head the night before their final hike; Pigman’s BBQ treated them to lunch; the Outer Banks Brewing Station provided dinner; an employee from Jennette’s Pier bought them shirts because she was inspired by their journey. “That’s the kind of folks we had the privilege of running into. They didn’t know us, we’re kind of scraggly looking. That’s the kind of incredible humanity we encountered,” Woofter remarked.

Both men want to share the insights they’ve learned with other veterans, or other people in their communities. For JB, though he knows it will take some time to process the hike, he is seeking ways to give back more.

Woofter is still figuring out what’s next for him. After his retirement from the Air Force this October, he plans to continue volunteering at Shenandoah National Park and at his church. “My wife is encouraging me to teach some basic survival skills. Maybe this hike is an introduction to it … Maybe I will help other people who want to hike. I see a lot of mistakes by people out there who overestimate what they can do, particularly in the summer. They don’t realize that when you go down that mountain you have to come back up.”