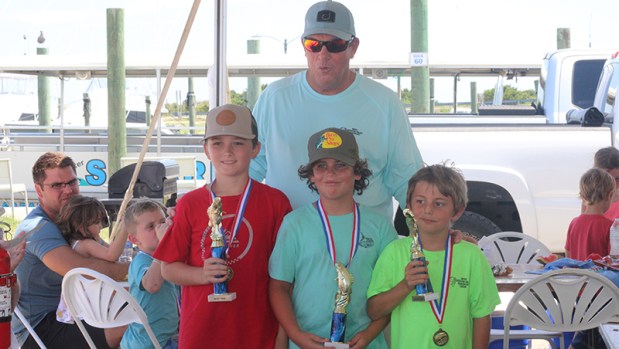 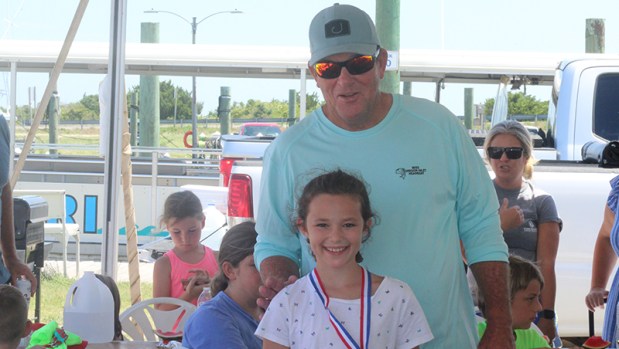 Each participant was given a tee-shirt, a medal and a new rod and reel. Captain Edward Lee Mann presented the awards. He is shown here with Gina Stevens, age 9. Summer Stevens photo 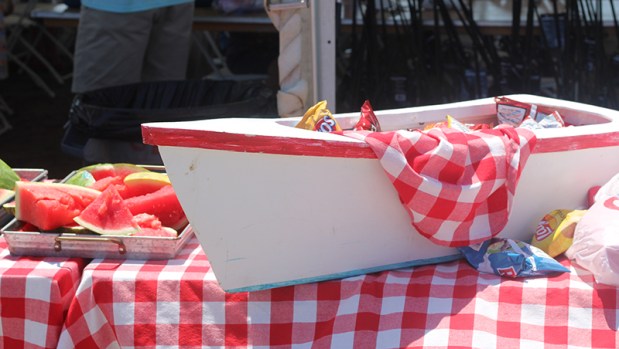 After the tournament, a lunch of hot dogs, chips, watermelon and soda was served. Summer Stevens photo 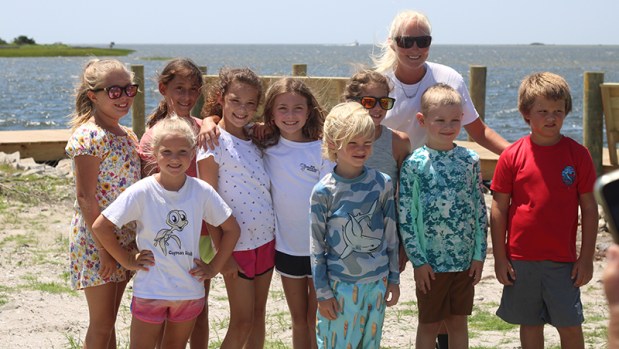 Children were broken up into teams led by one of the Miss Oregon Inlet II mates. Summer Stevens photo 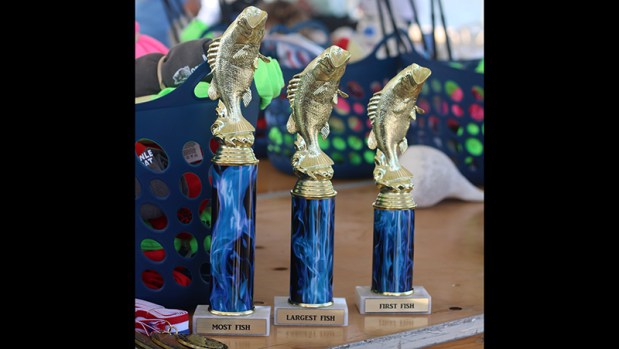 Awards were presented for the most fish, the biggest fish and the first fish. Summer Stevens photo 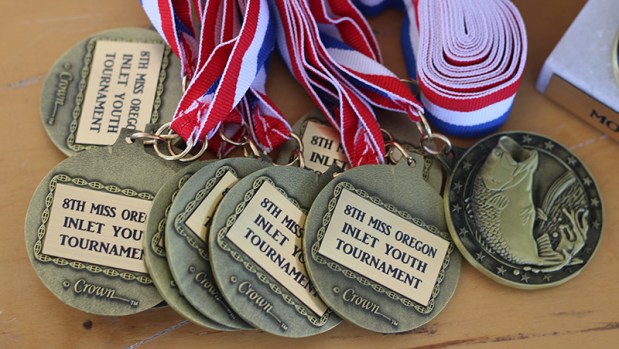 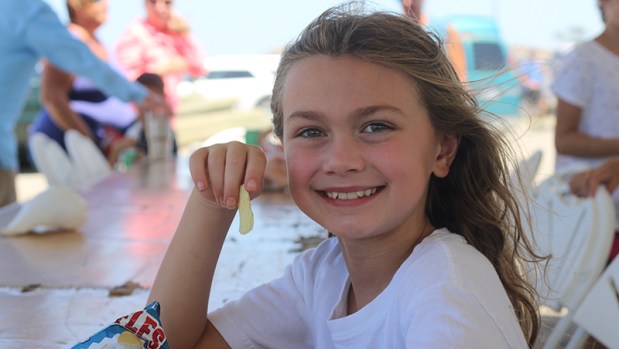 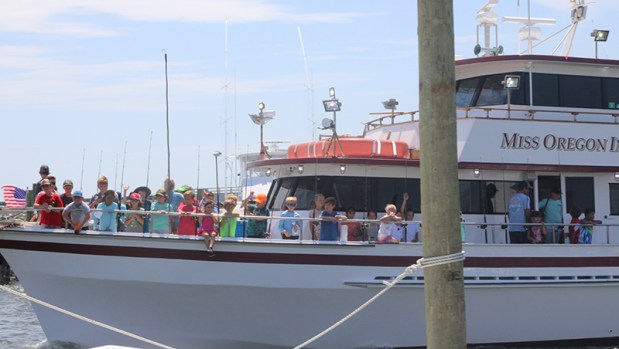 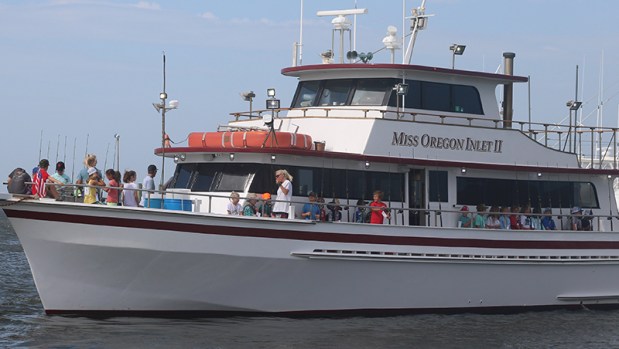 Fifty boys and girls participated in the tournament in the 6-10 year old division. Summer Stevens photo 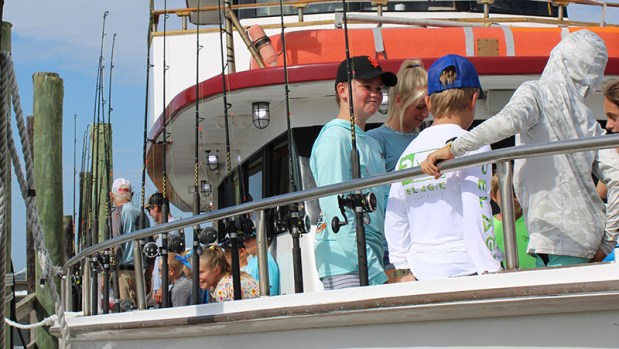 New friends are made upon the Miss Oregon Inlet II at the Annual Youth Fishing Tournament. Summer Stevens photo 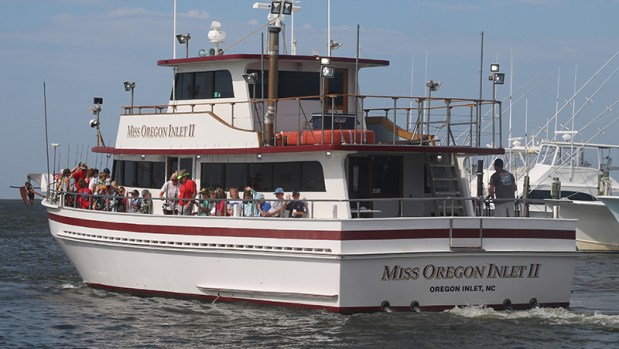 After registration, participants were placed in groups with other youth fishermen and a mate to help them along. They were provided with all the fishing equipment and instruction needed to catch fish. The tournament is catch and release. Many years a representative from the North Carolina Marine Fisheries will come aboard and talk to the children about the importance of releasing small fish so they have an opportunity to grow large for the next season. The focus of the tournament is to build in children a love for fishing and a respect for the water.

“It’s important for kids to get out on the water – to respect the water, respect the fish size. It’s a great day for them. They’re really looked out for [by the captain and crew]. We try to make it a positive experience for them on the water, so they’re proud of themselves,” said tournament coordinator and Miss Oregon Inlet II co-owner Melodye Cannady.

Cannady’s father was a boat builder and a captain all of his adult life, and she has many memories of being in and around the water. “I spent many a happy year around the Oregon Inlet Fishing Center as well as in the sound, and in the ocean. I used to take my boat when I was about 10 and would see my dad come in to the Fishing Center from the Gulf Stream. It’s a good history I had as kid,” she said.

“I grew up here in the Outer Banks, and I always fished in the sound. The local kids don’t always have an opportunity to get out there to fish and get out there on the water,” she added. “I want everybody to enjoy it like I did.” Cannady said the tournament helps kids to build relationships and promote confidence.

Though the atmosphere is fun and encouraging for all participants, each year there are trophies awarded for the first fish caught, the most fish caught and the biggest fish caught.

In the older group, the first fish was caught by Owen Shields; the biggest fish was caught by Jake Dalia, a croaker measuring in at 11.5 inches; and there was a tie for the most fish caught. Joe Waddington and Ethan Lancaster were tied with 14 fish each. There were two run offs, and both times the boys caught a fish at the same time.

After the tournament, kids returned to land and were served a lunch of hot dogs, chips, watermelon and soda pops. Each participant was given a medal and a brand new reel and rod courtesy of the Oregon Inlet Fishing Center. “When we told them we were going to split the tournament and [have more participants], they didn’t hesitate,” Cannady said of the Fishing Center’s willingness to provide rods and reels every year.

The tournament is sponsored by Kitty Hawk Kites, who does the booking and also provides the tables and chairs. Proceeds from the tournament after expenses are donated to a non-profit or family in need.

One big change to the tournament is the brand new boat, just purchased this spring. The original Miss Oregon Inlet retired after 44 years at the Fishing Center and almost 50 years in the water.

Cannady’s father was one of the owners, and he passed his shares on to her. Now, there are several owners, many of whom who are second or third generation owners. There were repairs needed to keep the boat in good standing according to the Fishing Center regulations, and it made sense to replace it. Cannady and her son found a beautiful boat in Belmar, New Jersey. “I saw it and I said ‘This is the one I want.’ It wasn’t for sale, he was just kind of thinking about it, but we talked him into it. I’m really pleased with this boat. And the owner has bought a newer larger boat and he’s happy. We stay in touch. It’s a really loved boat,” she said.

The larger boat allows them to take larger groups out. For the kids fishing tournament, they could accommodate 50 kids, plus crew for a total of 65.

The tournament happens every year, the first Monday in August. For photos and more information, visit the Miss Oregon Inlet Facebook page.