Manteo student recovering from boating accident: After three surgeries, JD Perry looks to get back on his feet and the baseball field 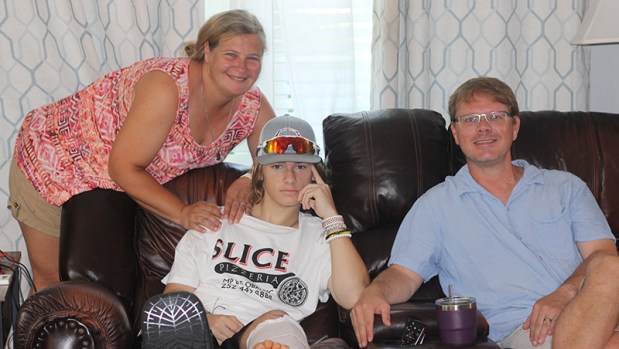 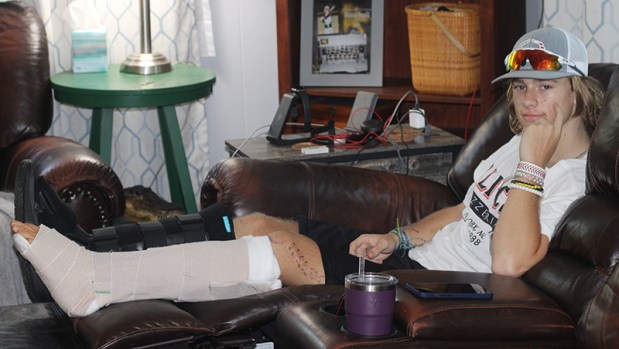 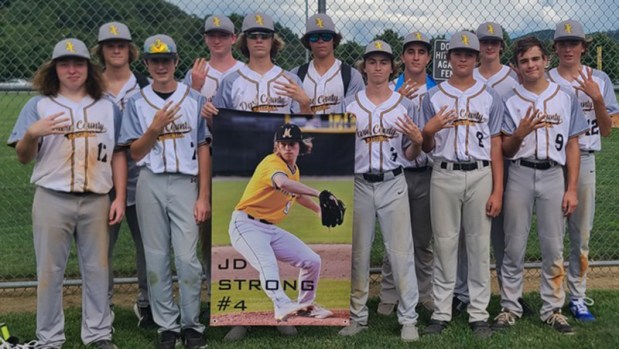 JD Perry’s Dare County 15U Team had this poster made up for him following his accident on July 13. Courtesy Brianne Clark-Perry

When Brianne Clark-Perry’s cell phone rang on July 13, the caller ID said it was her 15-year-old son, JD. It was a phone call she would never forget.

He was enjoying his summer vacation, hanging out with friends and doing what he loved most: playing baseball. The night before, JD Perry had pitched in the 15U district championship baseball game, helping to lead his team to victory. They were set to go to state just days away. It was a sunny day, so JD had headed out to go boating in Shallowbag Bay in Manteo with some friends.

“I thought it was him asking for concert tickets that night, and I got the Manteo Police Department instead,” she said. “I think when I heard Manteo PD I kind of went into shock.”

JD had been in a boating accident resulting in severe leg trauma. The ambulance had been called to take him to the hospital.

Brianne and her husband Chris Perry rushed to get to the hospital, but were notified that JD was still at the docks, so they drove straight there. Brianne couldn’t even get out of the car, for fear of the images she knew she’d never get out of her head.

“It was a shock,” Chris said of seeing his son after the accident. “At that point in time, we didn’t know any of the particulars. When we saw him, he was there moving and speaking to me so that was actually a little bit of a relief that he was still alive.”

JD had been in the water, hanging over the edge of the boat when his legs were sucked up into the propeller. His left leg sustained the most injuries – he lost a portion of two of his calf muscles, severed a nerve, broke his tibia, broke his fibula in three places, tore his Achilles tendon and destroyed his lateral metatarsal, which is one of the long bones in the foot. The right leg was also severely injured and broken.

The first priority for doctors was saving his life. He had lost a lot of blood and though he was conscious the entire time, his survival wasn’t certain in those first few hours.

JD was taken to The Outer Banks Hospital in Nags Head to stabilize him, where a tourniquet was applied to his leg and he was given blood transfusions and medication for the pain.

When asked if he was afraid, JD replied, “Not really. I played rock paper scissors in the back of the ambulance.” Throughout the whole ordeal, JD maintained a confidence that he was going to be okay.

At the ER, doctors prepared the Perry family for the worst-case scenario. “They said the first priority was to stabilize him and save his life, and do what they could to save his leg,” Brianne recalled. “They prepared him for the good likelihood that he would lose his leg.”

“And life,” JD added quietly from the recliner chair in his Manteo living room.

“Everyone was talking about it. When I went to the X-ray room, they were like, ‘It’s good to see you. We didn’t think you’d make it,’” JD remembered.

Over the next two weeks, JD had three surgeries at Norfolk General to save and reconstruct his leg. One of the major concerns was infection, particularly because the accident happened in the Albemarle Sound where bacteria could seep into his wounds and his bones.

Doctors stabilized and cleaned his leg and removed the damaged tissue. They reconnected the ligaments in his knees and put in a pin connecting his foot bone with his pinky toe. A metal rod was inserted through his tibia, which will remain permanent if there’s no rejection of it. He has stiches and lacerations all across his leg.

After his surgeries and recovery, he was transferred to another location for in-patient rehabilitation.

Throughout his stay at the hospital, he had 47 visitors. And that was just the beginning of the outpouring of support from his community.

One of Chris’s co-workers set up a GoFundMe page to raise money for medical expenses for the Perry family. As of press time, the fundraiser had well over $12,000 from 105 donors—individuals, local businesses, other youth sports organizations and many anonymous donors.

Friends came by the Perry house and built a ramp so JD could easily access his front door with his wheelchair. Slice Pizzeria held a fundraiser in support of JD. A meal train was set up to provide food for the family as they cared for JD and coordinated doctor visits and physical therapy appointments. Fellowship of Christian Athletes (FCA) organized a prayer and praise night. The paramedics who arrived first at the scene paid JD a visit at home, and the Roanoke Island Fire Department stopped by to give him a t-shirt signed by all the firefighters.

“You knew you had friends and you knew it was a good community but the outpouring has been …” Brianne’s voice breaks. “It’s hard to put in words how much people have done. I just start crying when I think about.”

“Thank you is not enough, but it’s all you can say,” Chris said.

There is another benefit being planned by Jesse Granitzki at Pirate’s Cove Pavilion on Sunday, September 4 from 5-8 p.m. Tickets ($25 each) can be purchased at the door or in advance from Oceans East Tackle and Southern Bank locations in Manteo, Nags Head and Kitty Hawk for a BBQ/steamed shrimp dinner plate with fixings, dessert and a drink. Pizza by the slice is available courtesy of Slice Pizzeria.

The benefit will feature a silent auction for charter fishing trips, guided duck hunts, fishing and boating gear, artwork, jewelry and more, for the purpose of offsetting the medical and travel expenses for the Perry family. “Please come out and enjoy some great food, bid on some great items, and help this family that has done so much for the baseball youth in our community,” said the benefit flier.

For now, JD is taking it day by day, working to get stronger every day.

His goal? To be able to play baseball again. When asked by The Coastland Times how he felt about baseball, he responded with a single word: “World.”

Even though he puts on a brave face, this has been hard to endure, and it’s far from over.

When his dad was talking about the physical therapist’s plan to slowly stretch the Achilles, JD asked, “Is it going to hurt?”

“Is it still going to hurt when they do the little bits?” he asked, an endearing reminder that he’s only just 15.

“No,” his dad replied gently.

JD is confident that he’ll be able to walk again in a month, and hopes to start school back at Manteo High School on schedule at the end of August. He can opt for remote learning, but the family is optimistic that he can manage in-person. He will continue specialized sports medicine physical therapy geared toward baseball rehabilitation and, if the family’s prayers are answered, he’ll be back on the field in the spring.