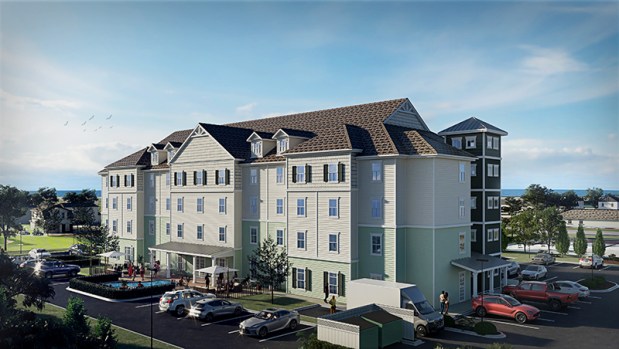 Rendering of the a proposed 90-unit hotel just south of the Village of Nags Head and north of Lakeside Street. Courtesy Town of Nags Head 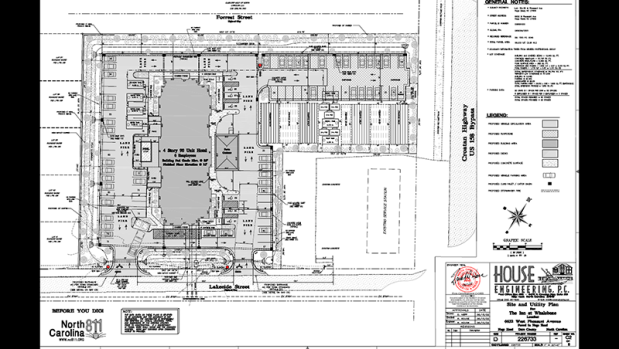 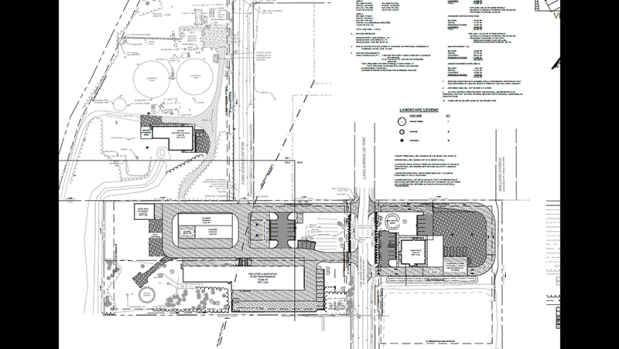 Sketch plan for a proposed trade center to be located behind TW’s Bait and Tackle. Courtesy Town of Nags Head 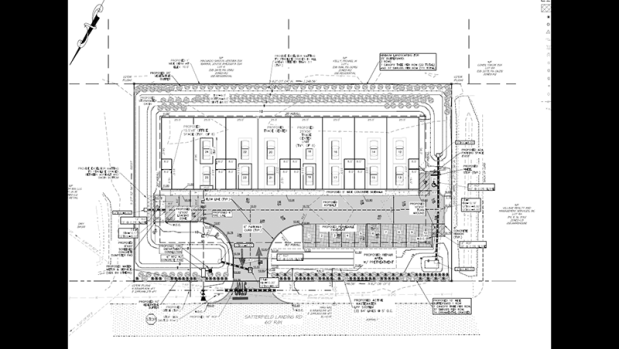 The monthly Nags Head Planning Board was called to order by Chairwoman Megan Vaughan at 9 a.m. on Tuesday, Aug. 16. The first action item on the agenda was a site review plan presented by House Engineering, P.C. for construction of a four-story, 90-unit hotel to be located at 6632 W. Pheasant Ave. The property is located just south of the Village of Nags Head and north of Lakeside Street.

House Engineering indicated all of the stormwater will be managed on the site. The planned lighting will point away from the residential area toward the hotel. According to House Engineering, the North Carolina Department of Transportation did not find the proposed curb cuts to be a problem.

Planning Board member Molly Harrison voiced concern with the current plan to have traffic routed onto Lakeside Street. Harrison stated, “I live on that street and I have an issue with this. It’s just too much traffic there already.”

Board member David Elder added that it is not just traffic, but it is the kind of traffic. He indicated concerns about bicycles, children, pedestrians, parking and increased congestion approaching the bypass.

Board member Meade Gwinn indicated he had serious concerns about traffic coming from the proposed hotel, specifically pedestrian traffic.

Board member Gary Ferguson agreed with Gwinn and Elder that the plans complied with town rules, but that does not mean that there are not safety concerns with the plans.

Vaughan called for a vote and indicated that the vote was on the site plan’s compliance with current regulations, not a disagreement about rules. Harrison and Elder opposed the site plan. Vice Chairwoman Wright joined Vaughan, Gwinn and Ferguson in voting yes. Board member Megan Lambert was absent from the meeting.

The second action item was a sketch plan review submitted by Michael Strader, P.E. of Quible & Associates, P.C. for construction of a trade center to be located directly behind TW’s Bait and Tackle located at 2230 S. Croatan Highway. A trade center is a structure containing two or more individual units, primarily devoted to service and wholesale operations and the storage of materials for offsite work.

The proposed trade center will be owned by a single owner who will have lease agreements for the eight units. The site plan shows the stormwater design will handle a storm event in excess of 4.3 inches. Piping is not planned to connect to the existing draining system. Other stormwater features include the implementation of low impact measures such as permeable parking pavement to lessen stormwater impacts.

Elder indicated he is concerned with the parking. Vaughan voiced concerns about whether the site, once built, will be in compliance with the intended use.

The final action item was presented by town engineer David Ryan, who reviewed the sketch plan review submitted by consultants, Oakley Collier on behalf of the Town of Nags Head. The project consists of the design and construction of several new town public works facilities on the 11-acres Public Works site located at Pond and Lark Avenues.

The planned work will include a water distribution center; fleet and facilities maintenance building; a fuel pump island and car wash; a new vehicle storage building; a small storage building; a new public parking area and a service ramp that residents can use to drop off their debris or recyclables into bins.

In addition to utilizing existing septic usage, the recycling yard will have a separate containment for onsite stormwater to meet the town standard for a 4.3-inch design storm event and the management of the runoff from this site. Additional facilities will be used to manage the runoff including perimeter swells, a wet retention pond, a ditch, and connectivity between the ditch and pond.

The proposed timeline is for bids to be advertised on Tuesday, Sept. 20. The Board of Commissioners are scheduled to provide preliminary approval on its consent agenda on Wednesday, Oct. 5. The commission’s formal review will take place on Wednesday, Nov. 2 and bids will be received beginning Thursday, Nov. 3. The notice to proceed is scheduled to be received in January 2023. February 2023 is the earliest that construction will begin. The project will be a traditional design-build project that is expected to be an 18-month project unless it is completed in phases.

In addition to action items, deputy planning director Kate Jones provided an update on the tree preservation regulations and opportunities. She outlined items that planning staff identified that need further clarifications to make it clear what can be removed and what can be performed prior to a permit. Also, Jones indicated that the regulations need to outline the penalties for noncompliance and what incentives will be in place to reward compliance.