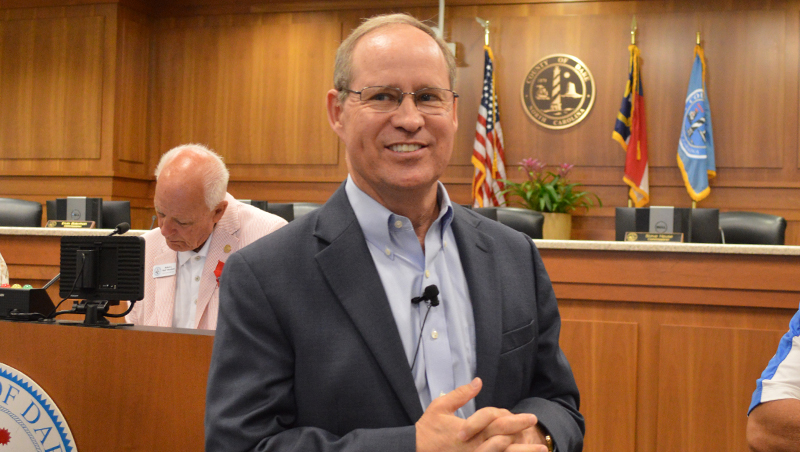 In the afternoon, Murphy announced the introduction of legislation authorizing the Secretary of the Army to conduct a feasibility study for constructing a dual jetty system at Oregon Inlet.

The bill was introduced at 11 a.m. Friday, August 19. Its assigned number is H. R. 8728, but the text is not yet posted. The legislation has been sent to the Transportation and Infrastructure Committee. It was also introduced by U.S. Rep. Rob Wittman, from Montross in northern Virginia.

Murphy acknowledged that Oregon Inlet was the most studied inlet in the United States. Some 23 agencies have jurisdiction for the inlet, said Murphy. He’s asking the U.S. Army Corps of Engineers and the Department of Interior for a concerted effort for Oregon Inlet to have some route permanency for its users.

Robert L. Woodard, chairman of the Dare County Board of Commissioners, talked about the arrival of the shallow draft hopper dredge Miss Katie. “We had to do this on our own.”

Woodard said, “this is not a permanent solution.”

In his presentation, Murphy echoed Woodard about the Miss Katie. “It’s not a permanent fix.”

He said, “we need predictable pathways.”