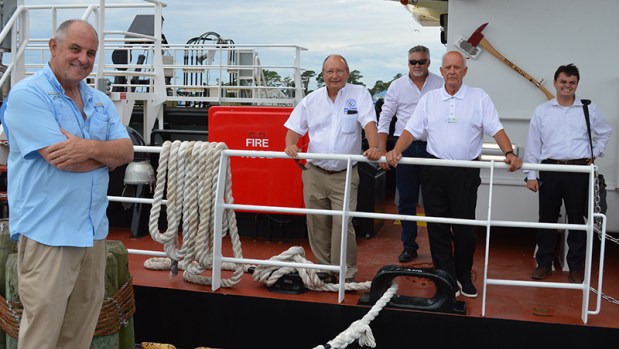 Dignitaries climbed aboard the Miss Katie when she was eight miles out from her home port. On the deck of the docked Miss Katie are, from left, Dare County commissioner Jim Tobin, who chairs the Oregon Inlet Task Force; Board of Commissioners Vice Chairman Wally Overman; commissioner Steve House, who serves on the Oregon Inlet Task Force; board Chairman Robert L. Woodard; and Jordan Hennessy, vice president with private partner EJE Dredging Service LLC. Mary Helen Goodloe-Murphy photo 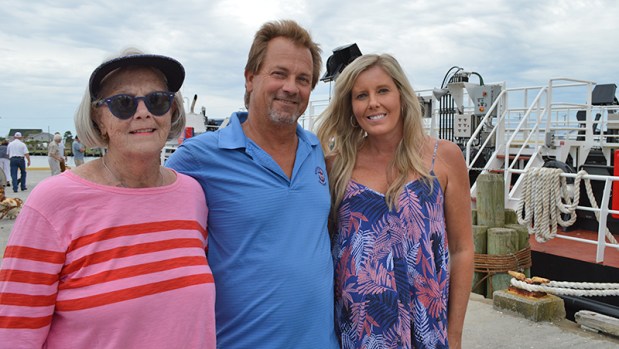 At the docks and greeting Miss Katie Captain Jeffrey Garrison are his mother Melva Garrison, left, and his spouse Jenn Garrison. The pair joined others awaiting the arrival of the Miss Katie. Mary Helen Goodloe-Murphy photo 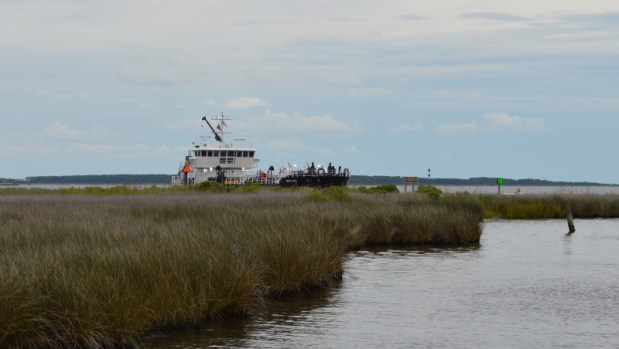 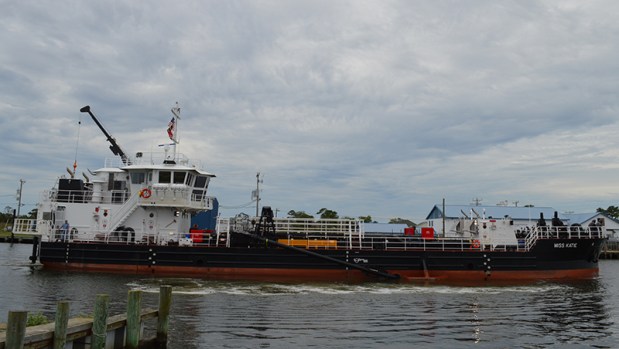 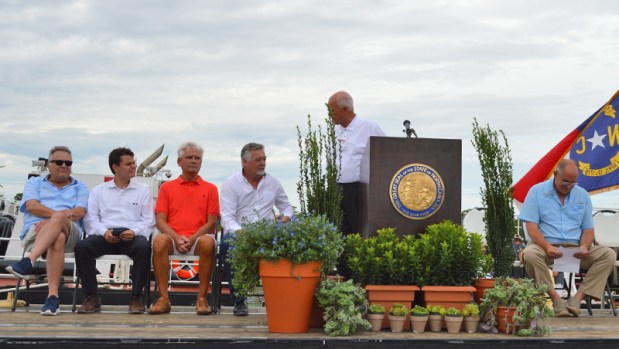 The shallow draft, split-hull hopper dredge Miss Katie sounded her fog horn just after noontime on Friday, August 19 and, on the careful command of Captain Jeffrey Garrison, swung around to sidle up to its berth in Wanchese Marine Industrial Park.

The Miss Katie is home, in her home port.

“It is complete. It’s official. The Miss Katie is home,” said a beaming Jim Tobin, a Dare County commissioner who serves as chairman of the Oregon Inlet Task Force.

The Miss Katie is home after a seven-day voyage from Morgan City, Louisiana, where she was built in the Conrad Shipyard.

She’s home to keep Oregon and Hatteras inlets and other waterways dredged.

Miss Katie is 156 feet long and 35 feet wide and is powered with 1520 horsepower through twin engines.

The dredge draws 4-feet, 3-inches empty and eight feet fully loaded and has a capacity of 512 cubic yards. The hopper can be filled in 30 minutes.

Dare County Board of Commissioners Chairman Robert Woodard proclaimed, “This is historic, unprecedented.” He said, “It’s one of the greatest days in the history of Dare County.”

The Miss Katie was built by a public-private partnership. The partnership between Dare County and EJE Dredging Service built the vessel.

The dredge was financed with $15 million from the North Carolina General Assembly drawn from Shallow Draft Navigation Channel Dredging and Aquatic Weed Fund. The vessel is owned by EJE Dredging Service. Total project cost including design and survey boat is just north of the state’s $15 million. The cost breakdown of the $15 million allocated by North Carolina is 88% to Conrad Shipyard; 3.3% to project management; 3.3% to Dredge Quality Management System; 2.2% to Design/Engineering; 1.7% for a survey boat; and 1.4% for other ancillary costs.

The county’s Oregon Inlet Task Force watched the shipbuilding and will direct its calendar of operations. In a brief ceremony or press conference at dockside, Tobin thanked the members of that task force who worked on the project over the years: Harry Schiffman, Mikey Daniels, John Ponton, Russ King, Bob Peele and commissioner Steve House.

“Folks, this is a game changer,” said Woodard.