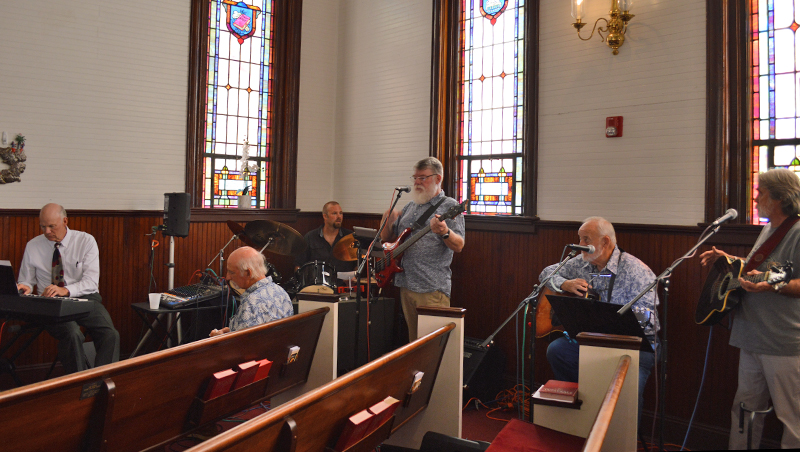 The 88th annual reunion of the Daniels family of North Carolina was held at Bethany United Methodist Church in Wanchese on Sunday, Aug. 21, 2022.

Headlining the event was Alex Gottschalk, who told the family that it provided the anchors for Marc Basnight’s instrumental contributions to North Carolina and its northeastern corner.

“Daniels Day,” as the reunion is called, was started Aug. 19, 1934 by Josephus Daniels, then ambassador to Mexico and publisher of the News and Observer, and by Melvin R. Daniels Sr., Dare County’s longtime register of deeds and local civic leader.

M. Roy Daniels III has long been the leader of the special afternoon event.

In the light-filled sanctuary, musicians played as folks gathered.

Roy Daniels first intoned the names of 11 family members who had died since the last reunion.

The family’s hymn, Faith of our Fathers, was sung by those gathered.

Then musicians swung into toe-tapping music: Closer Walk with Thee, Thank You God for this Wonderful World, I Can Only Imagine and Will the Circle be Unbroken.

Gottschalk titled his talk “Making His Marc” and credited the Daniels family with playing a significant role in Basnight’s life, for the Daniels family was active in local and state politics. Family members held elected offices like register of deeds and a seat in the state Senate. With The Lost Colony, he saw how important history and the arts were to a community.

The family gave Basnight anchors for a lifetime of public service.

That service started in the 1970s. In 1975, four-lane roads were considered the “modern road.” North Carolina had 600 miles of four-lane road. The state’s northeast corner had all of two dozen of those 600 miles – not a fair share. He was appointed to the state’s transportation board.

Family member Melvin Daniels decided to retire from the state Senate. As Gottschalk tells the story, Basnight sat all weekend listening to folks say, “we need you in Raleigh.”

In 1984, Basnight was elected to the state Senate.

In 1993, Basnight was elected Senate president pro tem, a position he held for 18 years.

“You can’t catalogue all he did,” said Gottschalk. “He knew how to work the state system. It’s quite remarkable.” 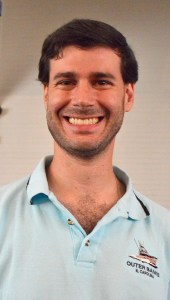 In the 1990s, Basnight turned his attention to the environment. “He never forgot where he came from,” said Gottschalk. He championed and funded the Clean Water Management Trust Fund.

In his second decade, Basnight remembered entrepreneurial adaptation so necessary to making a living on the Outer Banks.

Basnight saw the future in education, in developing human capital. He set about building up the state’s university system. That’s when East Carolina University got its dental school. He championed the Coastal Studies Institute.

Gottschalk told a story about the long-serving Governor Jim Hunt. An aide walked into the governor’s office to find Hunt with his head in his hands. He aide asked what was wrong. Hunt replied, “Basnight was in here again.”

The “Duke of Dare” just ran out of time to finish the four-lane project for 64.

“There’s never been a politician as instrumental,” said Gottschalk. “It reflects well on the leadership of this family.”

For 35 years, the Daniels family has awarded the Carrie D. and Melvin R. Daniels Sr. Scholarship. The 2022 scholarship was awarded to Corbin Tillett, who will attend College of The Albemarle to pursue a medical certification.