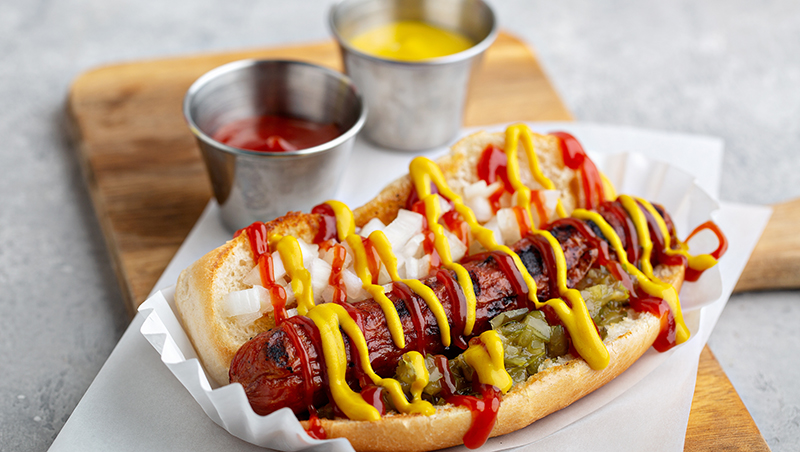 The Oxford Dictionary defines “sausage” as: an item of food in the form of a cylindrical length of minced pork or other meat encased in a skin, typically sold raw to be grilled or fried before eating.

That, my dear friends, means that the lowly, misunderstood “wiener” deserves the noble distinction of being called a sausage, right up there with fancy-named varieties like andouille, chorizo, bratwurst, Italian and Polish, to name a few.

Back in my childhood days we had two names for hot dogs: red hots or porkers –probably a bratwurst, but we hadn’t yet achieved that level of sausage knowledge. (The name, wiener, came later – at least in my hometown – after the skinless hot dog hit the market.)

The red hots my dad bought at Barduci’s Market came in twisted links that were fat, not all the same size and double delicious. At home, we charcoal-grilled them and plastered them with mustard, relish and occasionally ketchup. When we bought them at the hot dog shack at Lake Ontario, we got them all-the-way that, in addition to the aforementioned condiments, included chopped onions and hot peppers. Of course, no all-the-way red hot meal was complete without an order of French fries doused with malt vinegar and an RC Cola. In those days, our moms made us wait an hour after having the hot dog feast before we were allowed to go swimming back in the lake. They believed that not waiting an hour would result in stomach cramps and drowning.

I never had a sizzling, spicy chili dog – now my go-to favorite – until my family and I moved to Marion, North Carolina, where I took a job as an elementary school principal. (I can never forget the headline in the Marion newspaper: New Yorker Hired as Principal! Go figure?) Anyway, most hot dog chili sauces that come in small cans are, in my opinion, pretty bland, so I buy a larger can of regular hot chili without beans to solve the problem.

Anyone who has navigated the many aisles of a supermarket has seen the endless choices for hot dogs. The cheapest assuredly were filled or formed with minced “other meats” and the more expensive hot dogs contained the minced pork, beef or combination thereof. Those stuffed in a casing are usually at the higher cost end as are those carrying “famous,” familiar names.

Not only did my dad and I – actually, I only turned the crank on the meat grinder – make the extended families’ Italian sausage, but we considered non-casing hot dogs just small tubes of bologna and ate them raw. Surprisingly, I don’t think my dad or I ever suffered from any of myriad scientifically-long-named diseases attributed to eating raw meat. My dad, who was a hot dog junkie, always made faces at the table on the rare occasion mom made fresh Polish sausage with sauerkraut. I loved it and still do, although I’m not fond of the prevalent hard loops of Polish sausage in grocery stores now that could be used as a weapon.

If you are wondering – and perhaps you are – why an entire Memories and Musings column merits placing so much attention on sausages and hot dogs, the simple answer is wonderful memories. Hot dogs and sausages were the special guests at family picnics; they were the reason for the spectacle of my dad dangerously trying to light charcoal with gasoline. The large, extended-family get togethers after midnight Mass on Christmas Eve “featured” my dad’s hot Italian sausage and my Uncle Bruno’s homemade cordials.

The point, I guess, this column is making is to never forget the small things in life and the memories they evoke. After all, are not memories the only artifacts we have of the past?