Rodanthe meeting on beachfront houses and erosion draws a crowd 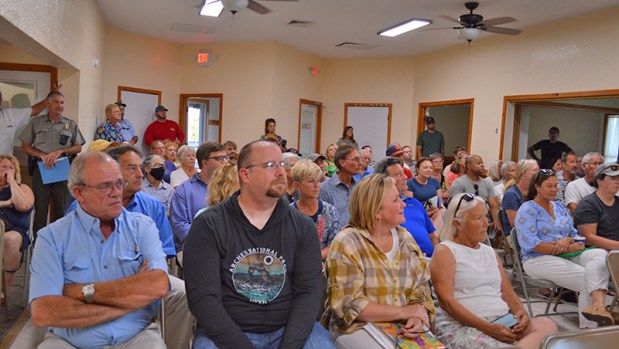 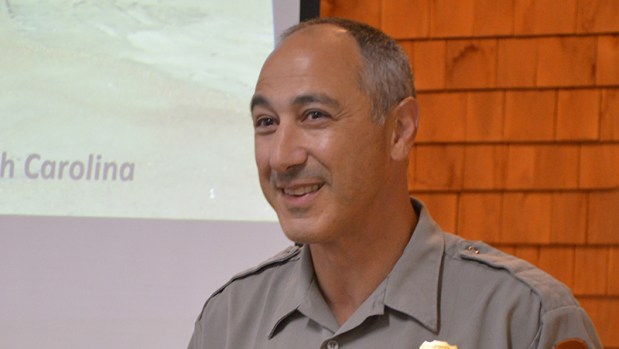 Dave Hallac, superintendent of National Parks in Eastern North Carolina, made a presentation titled “Impacts of Oceanfront Development Adjacent to America’s First National Seashore” to a crowd in person in the Rodanthe-Waves-Salvo Community Building and online on August 24, 2022. Mary Helen Goodloe-Murphy photo

In Rodanthe, a conversation about endangered beachfront houses, ocean erosion and beach nourishment drew an in-person and online crowd.

Dave Hallac, superintendent of National Parks of Eastern North Carolina, was invited to the Rodanthe-Waves-Salvo Community Building to talk about houses falling in the ocean. Some 70 people crowded into the building to hear his presentation on August 24, 2022 and another 70 listened online.

This spring, three beachfront houses on Ocean Drive in Rodanthe fell into the Atlantic Ocean. The first was February 9 and the second and third structures hit the national seashore beach on May 10.

The May 10 event drew national and international media interest. A video of one of the houses collapsing has been viewed 20 million times.

Within 48 hours of the February event, the debris field stretched 15 miles southward.

A photograph showed small pieces of tar paper littering the beach along with pieces of plastic blinds, carpet padding and fabric. Some 33 septic tanks are on the beach.

He said the Rodanthe beach was eroding more quickly that other areas. He estimated the rate at 10 to 15 feet per year.

The National Park Service is in touch with 24 homeowners urging that threatened houses be stabilized or removed.

Seashore staff is also asking these owners to obtain beach cleanup permits so a contractor can go to work as soon after a collapse as conditions are safe.

He reported that two houses on Ocean Drive have been moved. Four other owners are in various stages of moving back or to a new lot.

“It is not easy, not cheap,” commented Hallac, who thanked those owners for addressing the issues.

Cape Hatteras National Seashore staff continues to coordinate with North Carolina and Dare County. The agency has spent staff time and money to clean up the beaches.

A new machine – a Barber Surf Rake 400HD – has been purchased to address the lingering litter along the seashore.

Hallac pledged to continue interagency work and research for options to prevent impacts to the national seashore.

Hallac’s presentation lasted just about 30 minutes. Questions and his answers lasted about an hour.

The Cape Hatteras National Seashore now has a sediment management plan that sets out the conditions for issuing permits for beach nourishment. Hallac said “the purpose has to be for general public good.” He cited protecting NC 12 as in the Avon and Buxton projects or protecting Cape Hatteras Electric Cooperative’s transmission lines or Dare County water lines.

Funding for the projects comes from the Beach Nourishment Fund and from special tax districts created in each village.

For the Avon and Buxton projects, the Beach Nourishment Fund plus the special tax districts will contribute $22.7 million. A state grant will contribute $1.6 million and FEMA and other state assistance will kick in $8.8 million.

Dare County has issued private placement Limited Obligation Bond debt to pay for the projects. The bonds were placed with Truist Bank at 1.39% interest for five years.

South Shore Drive is immediately south of Ocean Drive. One property owner said 75 feet of 10-foot dunes are all gone. He asked “why can’t we be proactive?”