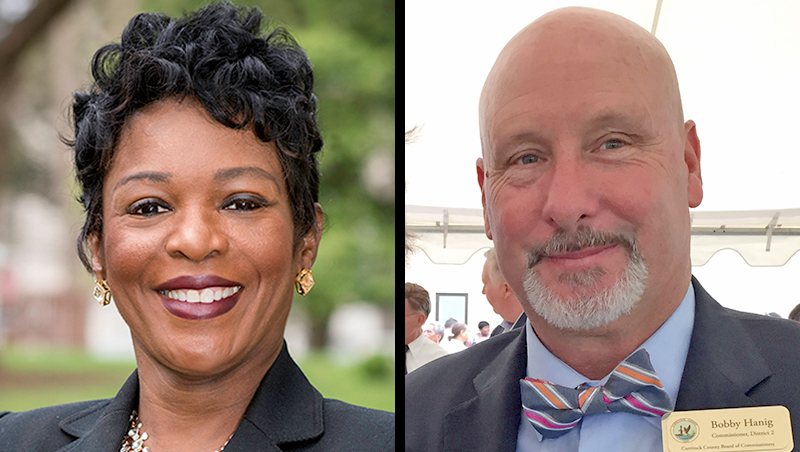 The Democratic nominee for a key North Carolina legislative seat this fall remains a candidate, the State Board of Elections ruled on Friday, rejecting a local decision that found evidence she didn’t live in the district where she’s running.

Along party lines, the Democrat-majority board voted 3-2 to reverse the findings of the Currituck County Board of Elections, which had recently declared there was “substantial evidence” that Valerie Jordan didn’t meet the residency requirement to run for the 3rd Senate District seat.

Jordan’s Republican rival, current Sen. Bobby Hanig, had filed the candidate protest against Jordan, contending that she actually resided in Raleigh, instead of Warren County, which is one of the 3rd District’s 10 counties. The state constitution requires legislative candidates to have lived in the district for which they are running at least one year before Election Day.

“Our job is to look at the documents before us, see if there was substantial evidence under the law,” board Chair Damon Circosta, a Democrat, said before voting yes to reverse. “And I just don’t find (Hanig’s) protest to meet that burden.”

Hanig said late Friday that he was weighing whether to appeal to Superior Court. The protest result affects a race that could decide whether Senate Republicans gain a veto-proof majority in the November elections. Such a margin would make it easier for the GOP to override bills that Democratic Gov. Roy Cooper vetoes.

Ballot printing in the 10 northeastern counties has been delayed in case Jordan was removed as a candidate and Democrats had to pick a replacement. State election officials said the counties must order printing by Wednesday morning so ballots are ready to send to absentee voting applicants.

Jordan, a state Board of Transportation member and consultant who grew up in Warren County, had bought a house in Raleigh in the late 1990s and worked there. Hanig’s protest in part included photos of vehicles at Jordan’s house in Raleigh that suggested she stayed there 23 consecutive nights in July and August.

During remote arguments Friday, Jordan’s attorney John Wallace acknowledged that she stayed there during that period to spend time with her daughter and grandson, but said that wasn’t relevant to the issue at hand. Wallace pointed to several pieces of evidence that he said showed Jordan had moved to Warrenton in December 2020 — well before the constitutional deadline.

Hanig’s attorney Craig Schauer argued there were inconsistencies in testimony before the Currituck board and actions that showed Jordan never abandoned Raleigh as her home. Regardless, he said, it wasn’t the state board’s job to substitute its analysis of the evidence for that of the Currituck board.

“We did not get to see or hear any of the actual witnesses, observe their demeanor, hear the inflection in their voices, or consider that as a practical matter,” said state board member Stacy “Four” Eggers, a Republican who voted no. He wanted to return the case to the Currituck board to provide more detailed findings.

Jordan said she was grateful for the board’s decision Friday.

“As I have said before, Warren County is my home,” she said in a statement.

Hanig, meanwhile, said the decision was motivated by partisanship: “The Democratic majority on the board decided politics was more important than the rule of law,” he said.

The governor appoints all five state board members, following recommendations from the two major parties. The August 23 Currituck board vote was 3-2, with the Democratic chair siding with the two GOP members.

Hanig was a House member sworn in last week to serve out the rest of the term of GOP Sen. Bob Steinburg, who resigned in late July.